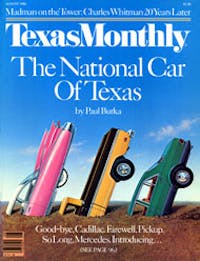 Sharon McCoy sells Suburbans. A lot of Suburbans. More Suburbans – and pickups and vans and Blazers – than anybody else. In 1984, working out of Lawrence, Marshall Chevrolet in Hempstead, she was number one in the country in truck sales.

Six years before she became supreme in Suburbans, McCoy held down two salaried jobs in Houston. A secretary by day and a receptionist at Bob Marco Buick by night, she still made less than $11,000 a year. Maybe, she thought, she could do better as a salesman. But the new-car manager – who also happened to be her boyfriend – told her she would never succeed. McCoy quit her jobs, her dealership, and, in time, her boyfriend, and began selling for Bob Robertson Chevrolet in Houston in September 1978. Two years later she sold more passenger cars than anyone in the Houston region.

Truck sales have traditionally been a good ol’ boys’ game. The only woman on the full-time sales staff at Lawrence Marshall, where she moved in 1983, McCoy kept winning – and turning down – such leading-salesman rewards as deep sea fishing trips and hunts on exotic game ranches. She does not try to be one of the boys. She regards her job as a profession, and she has the calm, competent manner of a professional. “Most people look at buying a car like going to the dentist,” she says. “The dentist’s job is to put them at ease. I’m the dentist.”

Style is not the only secret to McCoy’s success. She is to the car business what Richard Viguerie is to political fundraising – the master of direct mail. “If you wait for your customer to come to you,” she says, “you starve to death – unless you’re satisfied making two, three thousand a month.”

Every big city has a published list containing the names of everybody who registered a vehicle the previous day. That list is McCoy’s bible. Did a big organization buy a fleet of Suburbans? She sends letters to the credit union, the personnel office, and the employees club, offering a fleet discount for anyone who works there. If a company buys just one vehicle, she sends a letter offering to order additional cars at $100 over invoice and extends the offer to employees. Sometimes she even sends letters to individuals. Most of her letters go to Chevrolet customers, but occasionally she’ll approach buyers of other makes. When she’s not writing letters, McCoy drives around town with a tablet handy, making notes of commercial vehicles that are showing signs of age and then following up with a letter or a direct sales call.

For volume alone, McCoy’s biggest month was March 1980, when she sold 110 cars. But there’s more money in trucks. In September 1984, McCoy made $14,000 selling Suburbans and other trucks and cars for Lawrence Marshall – more than she made as a secretary and a receptionist in a year. Her take for the year was $96,500. The dealership sold the most trucks in Texas, including a state-leading 1100 Suburbans. But Lawrence Marshall depends heavily on Houston, fifty miles to the southeast, for its customers, and when oil prices began to fall, so did sales. Companies cut back on fleet purchases. Individual customers, worried about layoffs, suffered buyers’ remorse before deals could be closed.

This past spring, with no improvement in the Houston economy in sight, McCoy decided to switch dealers. In the world of automobile sales, she was as well known and as intensely recruited as an all-state quarterback in football. “I could have changed a hundred times in Houston,” she says. “I even had foreign-car dealers call. But you go where the volume is, and there was no reason to move until the economy went bad. Now the volume is in Dallas.”

Today Sharon McCoy sells Suburbans – and anything else Chevrolet makes – for Jim Johnson Chevyland on Central Expressway in Richardson, the biggest retail Chevrolet dealership in the country. On her first day at work, McCoy sat behind a large desk in the fleet sales department, far from the truck showroom. Only one thing was on the desk – the Freeman Auto Report listing every vehicle registered in Dallas the previous day.