Ultimate Ranger
On June 15 Joaquin Jackson, regarded as the Platonic ideal of the modern-day Texas Ranger, passed away in Alpine at the age of eighty. The next day, Texas Monthly contributing editor Robert Draper, who wrote a 1994 cover story on Jackson, took to Facebook to remember his friend. “When I decided to do a piece on the Rangers, I started out with only a couple of names,” Draper wrote. “Joaquin Jackson was one of them. I showed up to the Big Bend area, looked up his # in the phone book, asked if I could drop by to talk, and he said sure. . . . Joaquin referred me to a couple of other long-time Rangers, who in turn referred me to other old-timers. I managed to track down maybe a dozen who were willing to talk. But it all began with Joaquin and his rough-hewn candor. We became good friends, at the expense of uncountable bottles of tequila. I also saw him & his son & the actor Wilford Brimley go frog-hunting one day, which counts as one of the most politically incorrect episodes of my life. RIP.” 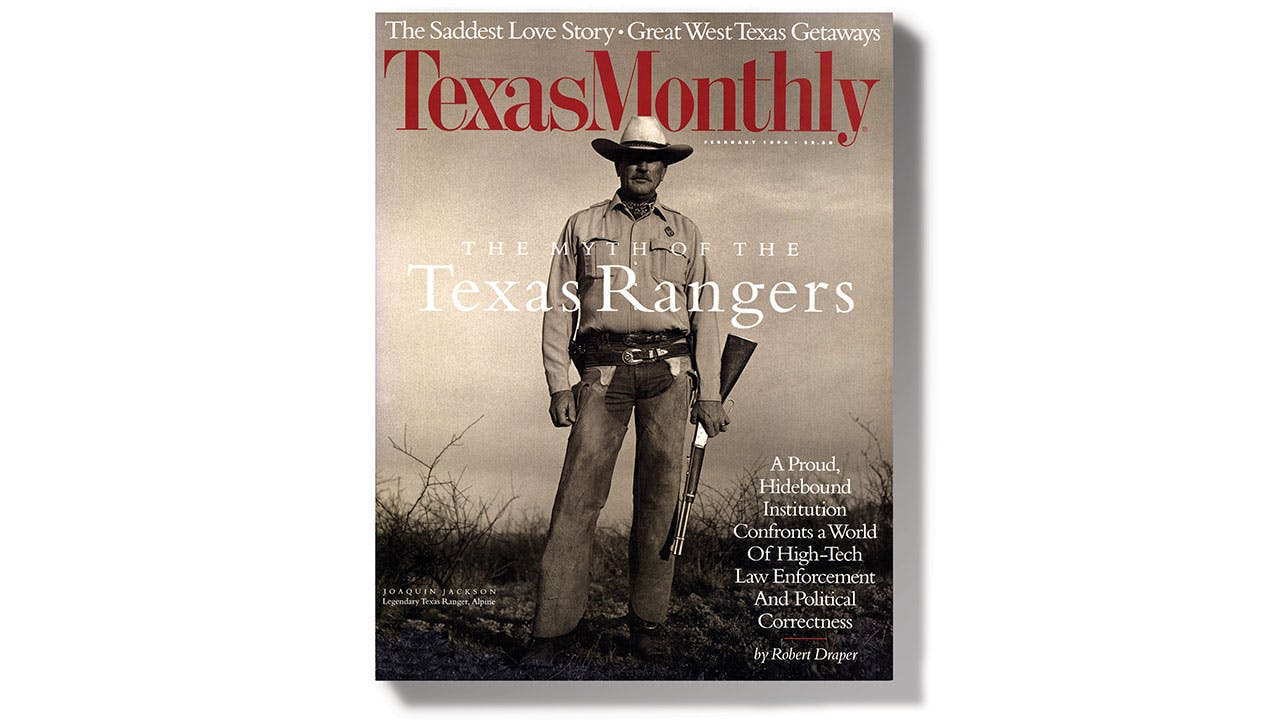 Q: So, this month’s Texanist looks a bit different from the usual Texanist column. Okay, a lot different. What’s up with that?
Jeff Salamon, Austin

A: The Texanist applauds your powers of observation, colleague Salamon. This month’s column is, in fact, different from any previous Texanist column—except for last month’s column, which was itself different from any previous Texanist column. That column was, as you know, a hat tip to the late Jack Unruh, the man who brought the page to life from its inception, back in 2007, until his death, this past spring.

Spurred by Jack’s passing, the Texanist and his keepers came to the conclusion that after nine years of purveying fine Texcentric advice, a change might be in order. This month’s back page reflects that shift. And that is the difference you have keenly noted.

Going forward, the Texanist, rather than succinctly responding to four or five letters, will, in a more expansive fashion, focus his attention on a single topic—an observation, an experience, an opinion, a current or historical event, a thought that crossed his mind while sitting at the bar, or, perhaps, the simple joy that comes from whittling. In short, whatever his editor will let him get away with.

Will the Texanist still find opportunity to offer his readers a bit of advice now and again? Of course. Texans, be they former or current, multi-generation or wannabe, have come to depend on the Texanist’s sage counsel, and he will not let them down.

Newsletters! Newsletters! Read All About It!
In our unceasing effort to stay atop the twenty-first century, texas monthly recently launched five mobile-device-friendly newsletters. The headlining act is the State of Texas, a daily dispatch of what’s going on with our most prominent politicians, our most charismatic celebrities, and our stupidest criminals. We’ll deliver it to your inbox each morning around 8 a.m.

We’re also offering This Week in Texas (a roundup of the best stories fromTexas Monthly), Editor’s Desk (a message fromTexas Monthly head honcho Brian D. Sweany), Traveling Texan (travel deals and ideas from our partners), and From Our Partners (special events, exclusive offers, and more). To subscribe to any (and preferably all) of them, go to texasmonthly.com/newsletters/ and check as many of those little boxes as you can.