No doubt you’re still grieving the loss of our dearly beloved, gone-too-soon Big Tex, who went up in flames two weeks ago today. Many of us have fond memories of childhood afternoons spent at the State Fair wolfing down funnel cake and posing with the 52-foot statue, but one Dallas man may just have something better in his barn: a six-foot tall, grinning, paper-mache and chicken wire head that served as the statue’s original noggin.

Wayne Smith bought the head at an auction in 1993 for $17,000, Eric Aasen reported in the Dallas Morning News.

Although the head, dubbed “Old Boy” by Smith, spends most of its time in a barn in Sulphur Springs, Smith had a photo shoot with the head at his University Park home. He discussed how his friends began calling him when they realized Big Tex was aflame.

Originally topping an  enormous Santa in the city of Kerens, Texas, the head was purchased in 1951 by State Fair President R. L. Thornton, according to the fair’s website. The head was repurposed by artist Jack Bridges and used in the inaugural Fair in 1952. After officials deemed his chicken wire and paper-mache skeleton too flimsy, it was taken down and the newer, winking, talking visage erected. And there was also another reason the head was swapped for another, according to Aasen: “[F]air officials thought his visage looked a tad evil.” Judge for yourself. 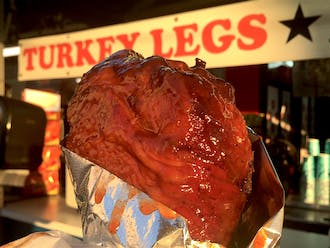 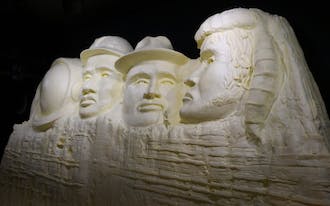