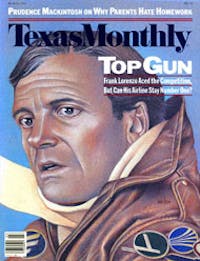 The strain of trying to get rich in Texas sent C.W. Post to the nuthouse—on a stretcher. To contemporary Texans, especially businessmen, Charles William Post’s life affirms the virtues of creative energy, positive habits, and persistence. On the other hand, his legacy demonstrates the peril of investing too much self in Texas’ markets and terrain. The place has a will of its own.

Post suffered his first nervous breakdown in 1885, at the age of 31, while running a farm implements factory in his hometown of Springfield, Illinois. In 1888 he headed to Texas, where he had invested in a tract of east Fort Worth real estate now called Riverside. Naming his development Sylvania, he promised parks, trolleys, and a boiler-generated electrical power system of his own design, which never panned out. He hawked business stationery made from cottonseed hulls, and he invented suspenders that adjusted to a man’s twists and turns through the use of small pulleys. The mental overload and meager profits from all those schemes drove him bonkers again. In 1891 Post’s wife, Ella, wheeled his stretcher off a train in Battle Creek, Michigan. At the local sanitarium Dr. John Kellogg (a future competitor) said there was no hope; the morose patient was bound to die.

Post, however, saved himself by eating a good solid meal. The path to a strong heart and mind, he decided, starts in the stomach. That realization revolutionized the way Americans eat breakfast. Post began reading medical books and decided that coffee was killing him. On hunting trips in Texas, ranch wives had served him a beverage made from chicory and wheat berries. Substituting bran and molasses for the chicory, he introduced his breakfast drink, Postum, with a challenge to caffeine addicts to overcome their “yellow streak.” Grape-Nuts, his 1897 product, consisted of wheat and barley bread that had been rebaked for 24 hours, and Post advertised that it made the blood redder. He invented cornflakes and marketed them as Elijah’s Manna in 1906. He changed the name to Post Toasties when preachers scolded him for sacrilege.

Post dreamed of creating a capitalist utopia of thrifty, well-nourished farmers in West Texas. Post City was laid out forty miles Southeast of Lubbock. Running his new town from Battle Creek, he had snack bowls of Grape-Nuts placed on the hotel restaurant’s tables, and he reviewed the menu: “When you have roast beef with juice, say so, and don’t say ‘aux jus’ . . . don’t try to make the cowpunchers out in that country think we are a lot of frog-eating French.” In selling 80- to 160-acre farms to screened applicants, Post left himself a healthy profit margin, but he also offered well-built homes, barns, stock tanks, and fences. He clustered four houses at crossroads to ease the rural isolation. Despite Post’s good intentions, dogs bit the neighbors’ children, and the hens’ eggs got all mixed up.

Weather and water were the twin curses of his dryland farming scheme. In 1909, when Post stayed in town long enough to help coach the baseball team, a tornado was followed by a horrid dust storm and 110-degree heat. Told that drilling underground water was not cost-efficient, he researched tales of downpours that followed artillery battles in the Napoleonic and U.S. Civil wars. He decided to blast rain out of the West Texas sky—to fly kites equipped with two-pound charges of dynamite and five-minute fuses. But no kite fliers stepped forward; instead for two years men lit fuses on the Caprock rim. Post said he went seven for thirteen in his 1912 “rain battles,” but since he scheduled many of them in the spring storm season, those statistics are inconclusive. Following the explosions of April 27, 1912, two hailstorms promptly battered the crops, diminishing the effect of a modest rain. Soon after, the discouraged tycoon started selling his Texas town and farms.

Post had a troublesome appendix removed at the Mayo Clinic in 1914. When he died shortly afterward of no apparent cause, mystifying his doctors, his family blamed the same old heartsick melancholia. His suffering of failure was always exquisite, and maybe he just bet too much on Texas. As for the utopia that is now the ordinary small town of Post, it died symbolically when America entered World War I. Afraid that German saboteurs might blow up Post with the dynamite left over from the precipitation experiments, folks pressured the town’s board to dispose of the cache. On April 17, 1917, about 24,000 pounds of dynamite shook the windows and skies. It didn’t rain.