The Rockets started off game four against the Golden State Warriors down 12–0. Late in the third quarter, when it seemed that he couldn’t miss a three if he tried, Steph Curry busted out his trademark shimmy. Golden State outscored Houston by 17 points in that quarter; since Steve Kerr took over as head coach in 2014, the Warriors have been 51–0 when outscoring their opponents by 15 or more in the third quarter. They hadn’t lost a playoff game in Oakland in two years.

What followed was one of the best quarters of basketball the Rockets have played all year and the worst one we’ve seen from the Warriors in recent memory (they sunk only 17 percent of shots, scoring 12). That’s what it took for the Rockets to pull themselves off the mat and avoid the knockout, winning the game 95-92. The performance has been described as “gutsy,” and it certainly was. In order to pull it off, it took everything the Rockets had left in the tank, because that’s what it takes to topple the Warriors. The problem is, they might not have anything left for game five.

Houston only had seven players see the floor Tuesday night, and one of those, Gerald Green, played for only twelve minutes. The other six played nearly the entire game, with four players totaling over forty minutes. Just Draymond Green and Kevin Durant played more than forty minutes for Golden State, which had nine players that saw significant action.

Teams have to shorten the bench during the playoffs, but the Rockets took it to the extreme. Not only did they play their stars significant minutes, but they were taxing minutes too. Mike D’Antoni praised the team’s defensive effort (even James Harden was playing defense!) for wearing down the Warriors, but lockdown defense tires the defender just as much as it does the person being guarded. There’s a reason LeBron James reportedly picks his spots to rest throughout playoff games. Most of the time he’ll take breathers on defense.

On top of that, Chris Paul—in his thirteenth season—has already been dealing with a nagging foot injury throughout the playoffs. Without Paul playing like he did in game four, it’s almost impossible to imagine the Rockets standing much chance against Curry, Durant, and the rest of the Warriors. Harden can’t do everything on his own.

The Rockets were jubilant following the victory, and there were reports of roars coming from their locker room once the final buzzer sounded. The Warriors were unfazed. Perhaps it’s just a case of one franchise experiencing a championship run for the first time while another has been there, done that, but the game seemed less a breath of fresh air into the Rockets season and more of a last gasp.

Credit to the Rockets for refusing to give up during any of the Warriors’ runs in the first three quarters, but think of everything that had to break right for them to win that game: Paul and Harden combined for 57 points, the Warriors couldn’t hit a shot in the fourth quarter, and Andre Iguadola didn’t play. Then there were the final ten seconds and the timeout that was never called.

Still, there in Oakland on Tuesday night—when Steph Curry couldn’t miss a shot—the Rockets never blinked. We’ve seen the same display over and over with this Warriors team. They’ll get on runs and put dagger after dagger into the opponent. They’re the best offensive team of all time. They’re impossible to guard. They’re unbeatable.

Rockets GM Daryl Morey constructed this team to give those guys a taste of their own medicine. That’s exactly what happened in game four. James Harden’s dunk over Draymond Green brought back memories of the famous LeBlock in game seven of the 2016 Finals, the last time a team came into Oakland and stared down the Warriors. That Cleveland Cavaliers team was similarly overmatched but refused to buy into the hype that surrounds Golden State. Houston was a team built to topple the champs. On Tuesday they believed it.

That’s why there’s hope for the Rockets in the rest of the series, in spite of all the logic that suggests otherwise. Playoff basketball especially is predicated on streaks and momentum. A team that believes in themselves can beat any and all challengers. The Warriors might be deeper and more experienced, but the Rockets are clearly hungry. It doesn’t matter that the Warriors are the better team; the series is tied, isn’t it? A source with the Rockets told The Undefeated’s Marc Spears that Harden is “business like I’ve never seen before.” Maybe something’s changed. Incredibly, the Rockets will return Thursday night to a home crowd at the Toyota Center with the series tied 2–2, and any dragging legs should feel a lot lighter from the support. They’ll have to find a way to channel the same spirit that lifted them in game four. 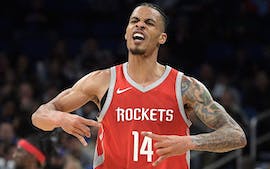