When the Texas Monthly art team headed south from Austin to Lockhart to shoot the cover of our August issue, they didn’t know quite what to expect. Would John Nova Lomax’s excellent reporting about a creative renaissance in small-town Texas be possible to capture in a single image?

Minutes after arriving at their destination, the two-year-old craft-cocktail bar The Pearl, in a strip of charming redbrick buildings right off the Lockhart square, any doubts were quickly put to rest. The bartender, Reuben Brooks (that’s him walking out the front door on our cover), gently nudged design director Emily Kimbro toward his specialty drinks when she tried to order a beer, and wound up making her a grapefruit margarita. (“Refreshing,” in case you’re wondering.) Then he came around, pulled up a bar stool, and spent the next thirty minutes giving Emily, photo director Leslie Baldwin, art director Victoria Millner, and assistant photo editor Claire Hogan all the tips and history lessons they’d need to pull off a cover shoot just outside.

The team had recruited some locals to show up on the day of the shoot, including Virgil Hendershot (that’s him on the left at the table), a longtime employee of Smitty’s Market, the legendary barbecue joint just across the square; and Mike Torres (across the table), who recently moved to Lockhart from Austin and runs a film production and catering business.

Locals new and old stopped and watched as shooting got under way. An eight-year-old girl who’d recently won a watermelon-seed-spitting contest hit it off especially well with Virgil. Nobody, least of all the agreeable local police, hassled photographer Randal Ford for stopping traffic. It was more fun to roll down the window and chat up the team about what was going on.

It was July 3 (typically the day of fireworks in Lockhart), so after the TM crew had gotten a good five hundred frames, they picked up pizza from Loop & Lil’s, an artisanal pizza place across the street from the Pearl, and headed to City Park to join the rest of the town for a good show. Nicki Longoria, our prop stylist for the day (that’s her painting the window), spent the evening scrolling through local real-estate listings on her phone. Lockhart may have wooed another fresh face. We gained a new level of respect for a town, like many in Texas, that is gracefully mixing old and new into a fresh cocktail. 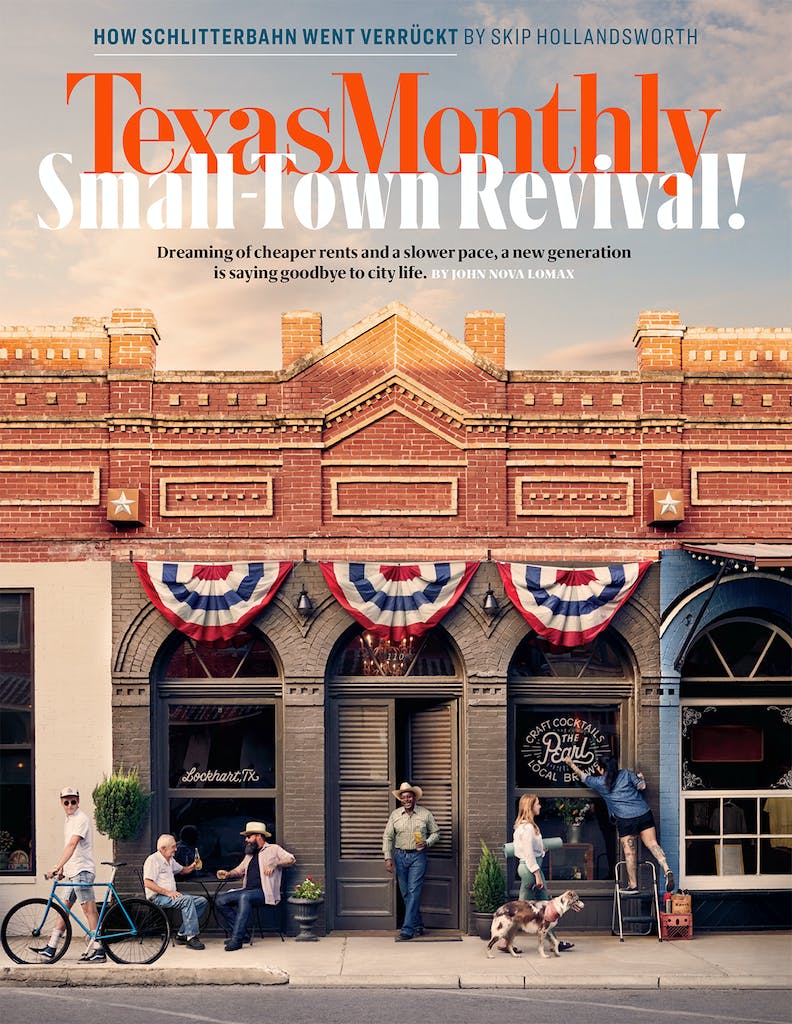 By John Nova Lomax
The Culture

By Texas Monthly
The Texanist