The current Cowboys roster was built by avoiding costly, splashy moves. The team’s current leadership has played unsentimental moneyball, parting ways with popular, but expensive, veterans whose best days appeared to be behind them—even if it happened earlier than fans expected. That tactic has taken Cowboys superstars such as Demarcus Ware, Demarco Murray, and Tony Romo off the roster in recent years. And as of Friday morning, Dez Bryant was added to the list.

The situation with Bryant had been building throughout the offseason. The team’s star receiver established himself as one of the game’s premier players between 2012 and 2014, recording more than 1,200 receiving yards and double-digit touchdowns in each of the three seasons. In 2015 and 2016, however, injuries forced him to miss time, and his numbers when he was healthy were underwhelming. Compounding the issue, Bryant seemed to display little on-field chemistry with quarterback Dak Prescott, and even in a full season of duty, he failed to top 1,000 yards and posted only six touchdowns in 2017.

Speculation has run rampant since the end of the 2017 season that the Cowboys would be asking Bryant to take a pay cut to remain with the team. A meeting at the Star in Frisco was scheduled for Friday, but according to NFL reporters, the team instead simply sent the receiver packing, making him a free agent for the first time in his career.

The immediate aftermath is two-fold: The Cowboys need to figure out what they’re doing at receiver, and Bryant needs to sort through suitors to determine where he wants to play next.

The Cowboys depth chart at receiver currently lacks a clear number one. The team acquired free agent Allen Hurns this offseason after he was released by Jacksonville, and former Chicago and Buffalo journeyman Deonte Thompson signed with the team as well. Veterans Terrance Williams and Cole Beasley are still around, along with a handful of young players who’ll come into training camp without much pedigree. The Cowboys own the number nineteen pick in the draft, which—in a class that lacks top-shelf receiver talent—gives them a fair chance at having their pick of players at the position. (Alabama receiver Calvin Ridley is a popular name among fans looking for an immediate replacement for Bryant.) It’s worth noting that, though it’s tempting for the Cowboys to bring in a young player who would have the sort of impact that Bryant had earlier in his career, right now they’re replacing a receiver whose stat line in 2017 was 69 receptions/838 yards/six touchdowns. The Cowboys need to get better at wide receiver, and it’s not unfair of them to have looked at the last three seasons they got out of Dez Bryant and decide it’s time to move on.

Which leaves Dez’s own future an open question. According to a columnist with the team’s website, Bryant told management as he left the Star that he’d see them twice a year—indicating an intention to sign with either Washington, Philadelphia, or the New York Giants. Philly is fairly set at his position, but both Washington and the Giants could use someone like Bryant. But they’re hardly the only teams who’ll be interested: Any organization looking for a player who can help put them over the top is likely in the Bryant market, which means that most teams that aren’t fairly early in a rebuilding process are probably at least asking themselves if there’s space in the locker room. New Texans safety Tyrann Mathieu tweeted at Bryant within minutes of his release “Come to Houston bro,” a move that would put the receiver in a position where he’d be looking for playing time alongside two former first-round picks, DeAndre Hopkins and Will Fuller V. That may not be the most logical fit for Bryant, but it’s fun to imagine (as Twitter user @texastrillahh did via Photoshop):

Bryant, most likely, would thrive in a situation where he joins an established number one receiver and can benefit from not being the focus of a defense’s attention for the first time in his career. Had he been released earlier in the offseason—and it’s unclear why he wasn’t—it’s easy to imagine him landing in a place like Oakland (which instead acquired Jordy Nelson, a star receiver released in a similar fashion).

All of this is speculation, though, and we’ll learn a lot more about Bryant’s future plans in the days to come. It’s unlikely that he spends too much time on the street—even with the NFL draft approaching and teams focusing on the young players they’ll be hoping to build around, a receiver with Bryant’s talent should quickly find a home. 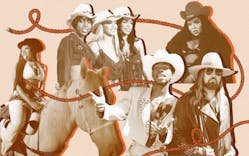 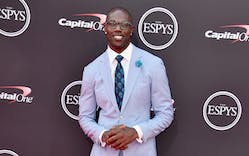 Is Terrell Owens Serious About a Comeback? 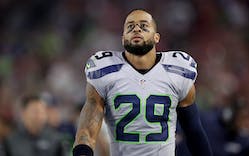 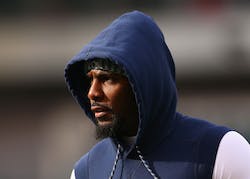 Did The Cowboys Do Dez Bryant Dirty?