The Texas coast in the early sixties had an end-of-the-earth feel. If something interesting was happening, you could bet that it was happening somewhere else. Surfing, more rumor than reality then, was an exotic pastime that belonged to places like Hawaii and California, just like skiing belonged to the distant Colorado mountains and Broadway musicals to New York. But we were not quite beyond the alluring reach of surf culture, at least as it manifested itself in Gidget movies, Jan and Dean albums, “surfer shirts” with no collars, and baggy swim trunks that featured a pocket for holding surfboard wax.

It was not all merchandising. There were surfers in Texas back then, but it was definitely the activity of a few pioneers trying to figure out how to make the magic happen in a place that, on the face of it, seemed to have little to offer in the way of moving walls of glassy water. I tried to surf once, when I was about fifteen, and once was enough for me. I had no idea what I was doing, but I was pretty sure that in order to surf you needed real waves, not this all-over-the-place Padre Island chop. Once or twice I thought I felt movement under the board and tried to stand up, but slipped right off as those paltry, sloppy waves evaporated. I gave up after probably an hour and left the beach to the proto-surfers. Lying on their surfboards in the brown, murky water, paddling around to avoid the trailing tentacles of Portuguese men-of-war, they stared seaward with touching faith, waiting for the one thing that this ragged stretch of the Gulf of Mexico did not seem to want to offer: a rideable wave.

Kenny Braun first tried surfing ten years or so after I did, but he didn’t give up so easily. He saw something that I didn’t, both in the sport itself and in the way it connected the participant to the rich and complicated Texas coastal environment. Rollover Fish Pass may not be the North Shore of Oahu, but the relative absence of towering waves seems to have had a liberating impact on Braun’s surfing photography, allowing him to forgo the spectacular nature shots we’ve come to expect and introduce us to something altogether different, a somewhat journalistic black and white chronicle that presents surfing not as high adventure but as dogged pursuit. There is no Banzai Pipeline here, just an empty cement tube sitting on a beach or a corroding, abandoned sculpture, mounted on wheels, of a perfectly cresting wave.

Even though the surfing in Texas can be truly outstanding, especially when the wind is coming from the right direction and the barometric pressure hits a sweet spot, storybook waves tend to show up on an uncertain timetable. Our surfers know this all too well, and they have made the necessary adjustments. Yes, in the Gulf of Mexico, surfers ride the wakes of oil tankers. When the ocean itself won’t supply a wave, you have to have the nerve and ingenuity to search out other things that will. That’s the way it is in Texas. 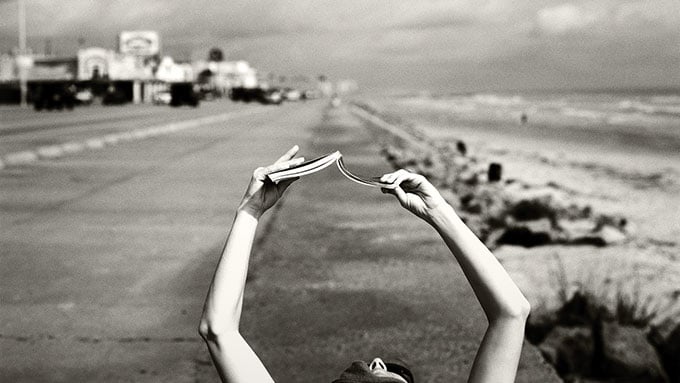