On Monday, the ultra-exclusive streetwear brand Supreme announced a limited product line using the artwork of Daniel Johnston, the beloved Texas artist who died in September. In some ways, the combination is an odd fit. Johnston was very much an outsider artist, a man of the people who traded his most iconic work—a mural in Austin with the image of a cartoon bullfrog asking “Hi, How Are You”—for a stack of product from the record store upon whose wall he painted it. Meanwhile, Supreme is a brand owned by the private equity fund The Carlyle Group, and whose partnerships include Louis Vuitton, Playboy, and Oreo. (A three-pack of Supreme-branded cookies starts at $10 on eBay.)

But the streetwear brand collaborated with Johnston during his lifetime. A 2012 Supreme collection featured a handful of T-shirts bearing the artist’s drawings, and in 2017, high-end Japanese fashion brand Sacai sold its own variation on his “Hi, How Are You” T-shirts that have been nigh-ubiquitous in shops along Austin’s South Congress strip (Sacai’s shirts, which retailed for more than $300, had small zippers in each side). Johnston may have been an outsider, but people whose job it is to find what’s cool have sought to brand his work for years.

Daniel Johnston for Supreme. 05/14/2020⁣ ⁣ This Spring, Supreme will release a collection featuring original artwork by Daniel Johnston. The collection consists of an Embroidered Work Jacket, Plaid Shirt, Rayon Shirt, Embroidered Work Pant, Hooded Sweatshirt, three T-Shirts and Beanie. ⁣ ⁣ Available online only May 14th. ⁣ ⁣ Available in Japan online only May 16th. ⁣ ⁣ As our stores in the US, UK, France, and Japan are temporarily closed to prevent the spread of COVID-19, shipping fees will be waived on all orders over $150.

Currently, there are no prices listed for the new Johnston line. But based on previous Supreme launches, we’d expect T-shirts to start just shy of the $50 range, while sweatshirts and other apparel will probably start at around $120. The clothing in the collection ranges from the intentionally garish—oversized rayon shirts with Johnston’s signature creatures, aliens, and heroes in pink and green—to more understated offerings, such as hoodies featuring Johnston’s interpretation of Marvel’s the Silver Surfer, a perennial favorite of the artist’s to draw. (He also loved sketching Captain America, who appeared on shirts in his 2012 collaboration.) On flannel shirts, T-shirts, work pants, and beanies, the brand reappropriates the message of his “Jeremiah” frog from “Hi, How Are You” to “I Know Supreme,” ensuring that no one might mistake your Daniel Johnston frog T-shirt for one that cost $20 at an Austin tourist trap.

Meanwhile, people who want to ensure that Johnston’s message maintains its original friendly spirit have other options. The Hi, How Are You Project—the Austin mental health nonprofit that, inspired by Johnston, launched in 2018—has added products to its online store that are less likely to immediately sell out than a new drop from Supreme. In addition to T-shirts, posters, and records, the organization also began selling Johnston-themed “Hi How Are You” face masks in early May, which make for a fine way to communicate to friends and neighbors that you’re masked up out of concern for their well-being. The “Happy Habits” bandana, meanwhile, offer a collage of Johnston’s drawings on a green piece of cloth, with mental health advice worth following running along the bandana’s border.

There are a lot of ways to pay homage to Daniel Johnston right now—regardless of whether your idea of a good time includes constantly refreshing the Supreme website on Thursday waiting for a product line that, like most of the brand’s collaborations, is sure to sell out immediately. 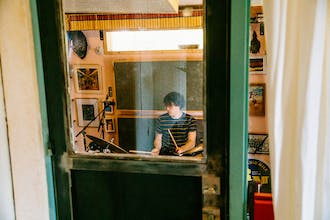 The Pandemic Separated These Band Members. It Didn’t Stop Them From Creating an Album.