DUDE, YOU’RE GETTING A DELL! You may be going to hell, but at least you’ll be able to take your computer with you. You see, I believe the Internet is the work of Satan. As far as I can tell, this seductive spiderweb of insanity has only two possible functions. One is to connect a short, fat 65-year-old man in New Jersey who’s pretending to be a tall, young Norwegian chap with a vice cop in San Diego who’s pretending to be a 15-year-old girl. The other purpose of this international network is to establish, once and for all, who is everybody’s favorite Star Trek captain.

Needless to say, I’ve never used the Internet, owned a computer, or had an e-mail address. Then again, why would anybody with a brain the size of a small Welsh mining town ever need those things? If you require information on a certain subject, go to one of those places (I forget what you call them) with a lot of books inside and two lions out front. Pick a title, sit on the steps, and read between the lions. This may seem like a rather Neanderthal method of education, but at least you won’t be tempted to pretend to be someone you’re not and you won’t get carpal tunnel syndrome. In fact, the only things you’re liable to get are a little bit of knowledge and some pigeon droppings on your coat—which most people will tell you, and most computers won’t, means good luck.

Good luck, of course, is better than a good hard drive anytime. I’m not really sure what a hard drive is, but I’ve heard grown-ups speak of it in positive tones. I’ve always found it ridiculous to hear people talk about how expensive, sophisticated, fast, or small their computers are. There must be something Freudian here, but I don’t know what it is. I’m sure Freud himself didn’t know what a hard drive was since he’d never even been up to Amarillo.

Of course, one reason why I don’t use a computer is because I’m too much of a genius to learn how. In fact, I’m writing this tissue of horse manure on the last typewriter in Texas. I also think that computers contribute to the homogenization of everyone’s brain. The technological revolution is not bringing us closer together—it’s merely making us more the same. I have this archaic idea that you should try to get it right the first time. And if you don’t, you should tear out the page and throw it in the fire. If you know you can change everything with some kind of electronic mouse, you’ll never know what it’s like to fly without the magic feather. You’ll never feel like Oscar Wilde behind bars with his hair on fire. Even Oscar had trouble with this sometimes. Maybe technology could have saved him. Maybe he could have called Emily Dickinson from a pay phone in the rain. Maybe Davy Crockett could have e-mailed Sylvia Plath from inside the Alamo and she wouldn’t have had to put her head inside the oven. But technology can’t save everybody, and it may not be able to save anybody. There’s no time between the windmill and the world to buy a van Gogh, help Mozart out of the gutter, Sharansky out of the Gulag, Rosa out of the back of the bus, or Anne out of the attic.

The other night I got home from a rather extended road trip and found that lightning had struck the dish, which meant I couldn’t watch Matlock. I figured I’d listen to a little music, maybe some Beethoven or Roger Miller. You can imagine my chagrin when I walked over and discovered that the cat had vomited on my CD player. Now I was forced to take the fifth on Beethoven. It was Roger and out. Without even the rudimentary elements of technological input in my life, I was truly back to the basics. There was nothing to do but think. Nothing to do but dream. Nothing to do but remember.

I recalled a small incident that had occurred earlier that afternoon when I’d walked into one of those OfficeMax places in Kerrville like a mad scientist, searching desperately for a cartridge that might mate harmoniously with the last typewriter in Texas. Of course, I didn’t find it. As I was leaving in a snit, I saw an old-timer entering the place, carefully clutching what is now considered an antique, a hand-levered calculator. He was a tiny man with a long white beard and a crushed straw hat on his wizened head. He wasn’t getting a Dell. He was just hoping that the young techno wizards at OfficeMax could repair his calculator.

“It’s not even in the catalog!” the tall, impossibly young salesman crowed almost joyously. Other employees crowded around to voice similar expressions of amazement bordering upon ridicule over this piece of machinery that had once been a workhorse of American business. “This belongs in a museum!” they laughed. But it wasn’t a museum piece to the old man who carried it protectively out into the parking lot. I looked up at the garish chain store in the ugly strip mall in the little town that was growing increasingly similar to every other town. Something there is that doesn’t love a mall, I thought. Something.

Back at the house that night, with the cat vomit slowly drying on the CD player, I sat back and lit up a cigar. I blew a smoke ring. It wasn’t perfect, but it wasn’t bad. I remembered how my old pal Wavy Gravy used to salute mistakes and imperfections. He said that’s what made us human. Meanwhile, that obnoxious kid was back on TV, smiling satanically at me like some adolescent Ronald Reagan pitchman, telling me I’m getting a Dell. I don’t want a Dell. I just want a typewriter cartridge. And the next time that kid says, “Dude, you’re getting a Dell,” I want a windmill to fall on him. 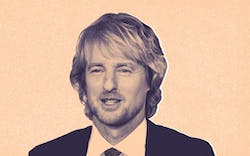 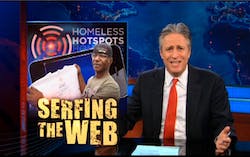