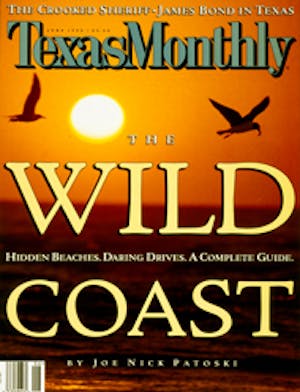 TEXANS ARE LONESOME FOR Lonesome Dove. A decade after the filming of Larry McMurtry’s epic western, we still miss Gus, Call, and company. The miniseries was a Hollywood rarity, a television adaptation whose power equaled that of its literary source and whose characters outshone the actors themselves.

Lonesome Dove charmed some 87 million viewers, but no one is more aware of its enduring magic than its screenwriter and executive producer, Bill Wittliff of Austin. “You couldn’t be on the set and not feel it,” says Wittliff, now 58. “We had incredibly high-powered talent and an unbelievably good crew, and we all recognized we were part of something truly special.” It was something truly Texan too, from the dustily authentic trail-driving to the horseback high jinks of star and native son Tommy Lee Jones. The production also benefited from its faithfulness to the Pulitzer prize—winning novel and from Wittliff’s insistence that everyone treat the television project with the reverence usually reserved for feature films. Even the heavens smiled on Lonesome Dove. “When we were shooting in New Mexico,” Wittliff recalls, “a snowstorm hit on the very day that we were planning to create a blizzard with potato flakes. This was in June! Then, right after we finished for the day, the sun came out, and all the snow melted. That kind of magic happened again and again.”

A fixture on the set, Wittliff augmented his producer’s duties with a voluntary assignment as photographer. Thanks to his eye and Lonesome Dove’s alchemy, the pictures seem transmuted—they are not just snapshots of actors Robert Duvall and Tommy Lee Jones but portraits of garrulous Augustus McCrae and brooding Woodrow Call, not merely reproductions of artfully enhanced scenery but the landscapes of Texas myth. Both the show and the ten images on these pages whisk us back not just to 1988 but to the late 1870’s. So convincing is Lonesome Dove’s illusion of reality that it fooled even Wittliff himself. “Once,” he says, “I remember watching the Hat Creek Outfit coming over a treeless rise with the herd, maybe half a mile or so away. I could hear the bellowing of cattle, the shouts of men moving them along, the dry squeak of the wheels on the chuck wagon. Then somebody shouted, ‘Cut!’ I turned to see trucks, cameras, scores of people—and my first thought was, ‘Now where’n the hell did all this come from?’”