Former Democratic congressman and likely presidential candidate Beto O’Rourke posts journals of his life, his thoughts, and his travels; only some of those make it to the web. We’ve imagined one that got lost along the way. (If you missed Vol. 1, you can find it here.) Welcome to the Beto Diaries.

Kansas has a flatness to it that makes me see why people could have a hard time believing that the world is round. Land splays out before me like a pancake, the fog a dollop of whipped cream, the infrequent structures like chocolate chips, or sprinkles.

Or perhaps that’s not it. Kansas is not so fluffy as the Great American Pancake. It’s flatter. Tougher. More like the textured cardboard backing of a wide-ruled legal pad, providing the protection and stability the thin yellow pages need. Does that make me the pages?

The truck and I left Muldrow a few days ago and headed back toward the TX and OK panhandles. Then up to the land that birthed Dorothy Gale and Toto. L. Frank Baum was himself from the East Coast, his Midwest years spent in South Dakota. But he placed his heroine here. Why? I ask myself, as I stare at the endless plains. What is it about this place?

I had my sights on Dodge City, Kansas, an old stop on the Great Western Cattle Trail. Cowboys young and old, from both sides of the border, moved behemoth herds of South Texas Longhorns to the railheads of the Midwest. Freight for the coasts. Beef for the masses. An eternal identity for Texas.

A couple hours into Kansas I’d been singing along with Jonathan Richman. Pablo Picasso was never called an asshole, we crooned. I passed signs for a town called Kismet. Something told me I was fated to stop there. When I turned off U.S. Route 54 I could see fifty or so small houses. Elementary school. Post office. Some businesses here and there. Small town.

I pulled in front of an auto shop and gas station called Plains Equity Exchange. Name seemed funny, but a quick internet search revealed that the company also trades grains and petroleum. That explained the towering silos behind the garage, the words “coop” and “Kismet” painted on them in the color of red dirt, the red dirt of America.

I went inside because the pumps were too old to take credit cards. I could use the conversation, anyway. I met a hardworking man named Wilson. He was about my age, wearing coveralls with a stain on the knee that matched the letters on the silos outside. If that knee could talk, I thought to myself.

Wilson’s lived all his life in Kansas. Followed Weird Al around the country when he was a younger, wilder man, but hasn’t strayed much since. His favorite song is “Addicted to Spuds.” Not everybody knows that one, he says. Tells me he saw Al play it at a show in Idaho in ’91, when he and his wife had just started dating. The energy in the crowd was unforgettable. He and his wife are still together, still listen to Weird Al.

I told him “The Alternative Polka” has always been the one that got me, probably because of Texas and Mexico’s rich history with the Czech music style. Wilson wasn’t familiar with norteño so I played some Ramón Ayala on my phone.

I asked Wilson to put twenty on pump ten, and was there anything I should see before I head for Dodge City? There ain’t much in Kismet, he said, but they’ve got the world’s largest hairball in Garden City, about sixty miles north of here. They pulled the hairball out of a heifer’s stomach at a nearby meatpacking plant. Wilson couldn’t remember when, seemed to have always been there. Weighed 55 pounds back then, but it got lighter as it dried. Still a sight for sore eyes. I told him I’d check it out.

Garden City was a little more than an hour away, enough time to listen to all of Let It Bleed and some of Sticky Fingers. “Gimme Shelter” is perfect for the road, even better in the flatlands. I arrived at my destination, the Finney County Historical Museum, about three quarters of the way through “Can’t You Hear Me Knocking.” It was small red brick building, next to a zoo. There was a water park across the street. I took a picture of the water slide and texted it to Khalid. I know he loves those.

I’d known hairballs, but nothing quite prepared me for the coarse, basketball-sized orb displayed on a wooden table in the middle of a crowded room. Dark gray and black, almost blue from certain angles, it seemed perfectly spherical. It looked like a planet. I thought of the Wicked Witch of the West’s crystal ball. I’ll get you, my pretty.

I stayed there for forty-five minutes. Took some notes. Tried to sketch, but I’ve never had much talent for that. Couldn’t capture the orb’s foreboding beauty.

Met a young girl, Ruth, road tripping with her parents and older brother from their home in Minneapolis to Colorado. Long journey, coming through Kansas, but that’s what iPads are good for. Ruth had no idea a cow’s stomach could hold something so large. Oh Ruth, you’re such a city girl, teased her mother, Kimberley. I said cities girl, if you count St. Paul. Kimberley grew up on a farm outside of Clarinda, Idaho. It was a good job at the Mooseburger Clown Arts Camp in Buffalo that brought her to Minnesota. She teased her daughter about needing more time and education with the grandparents, though she admitted she’d never seen something that big come out of one of their cows.

Eventually Ruth and Kimberley had to keep moving, and I was itching to get to my next destination, to learn a little bit more about the historical cattle trade that put Dodge City on the map. They say 75,000 steers passed through annually during the boom times. An endless stream of Longhorns. An industry town born. Decades later there’d be meatpacking plants all over this part of the country, and one of them would uncover a hairball unlike any the world has ever seen. And one winter afternoon a child, a clown, and a former congressman would bond over it.

I left the museum and headed toward Route 50. I saw grain silos in the distance and thought of Plains Equity. Wished I’d gotten Wilson’s number. 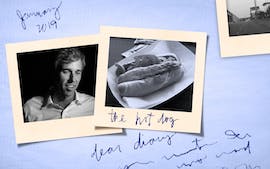