Miranda Lambert and Chris Brown have been exchanging rapid fire on Twitter since the Grammys.

Lambert, the country spitfire from Lindale who sings about eating bad men for lunch, took umbrage with the multiple Grammy performances by hip-hop singer Brown, who pleaded guilty to assaulting his former girlfriend, Rihanna, after a Grammy pre-party three years earlier. The day after this year’s awards show, Lambert tweeted:

How dang long did they give Nicki Minaj to do whatever that was? Strange. And Chris Brown twice? I don’t get it. He beat on a girl…

Not cool that we act like that didn’t happen. He needs to listen to Gunpowder and lead and be put back in his place. Not at the Grammys.

“Gunpowder and Lead,” which was written while Lambert was taking a concealed-handgun class, according to TEXAS MONTHLY‘s Skip Hollandsworth, goes something like this:

Wait by the door and light a cigarette

He wants a fight well now he’s got one

And he ain’t seen me crazy yet.

But Brown obviously doesn’t like being told what’s up. On Valentine’s Day, the day after Lambert called him out, he tweeted:

HATE ALL YOU WANT BECUZ I GOT A GRAMMY Now! That’s the ultimate F___ OFF!

There’s a chance Brown, who has since deleted that tweet, wasn’t even talking to Lambert—just the rest of the world thinking the same as her—but Lambert seemed to be looking for a scrap. So a day later she tweeted:

Oh and one more thing for all who are asking….I have a Grammy too:)

And a day after that, Lambert took the squabble offline and onto the stage, making Brown the focus of a diatribe at her show in Amherst, Massachusetts, that included mention of a shotgun, as this video footage from Good Morning America shows:

That seemed to be the end of it. But two days later, Brown couldn’t leave well enough alone and tweeted:

It remains to be seen if Lambert returns fire at her show tonight in San Antonio. 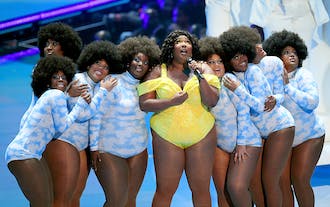 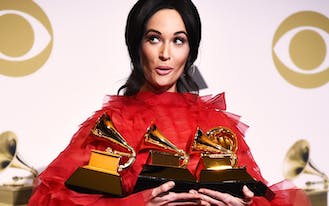