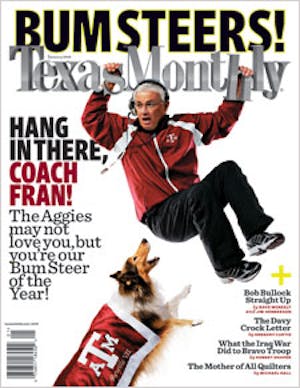 Garza was born and raised in Webb County. For the past fifteen years, he has been an inspector with the Cattle Fever Tick Eradication Program, a mounted patrol started by the USDA in 1906.

A tick rider patrols the border, the Rio Grande River, on horseback every day. Our job is to see that we don’t see any fever ticks on the native livestock or any Mexico strays coming in with fever ticks. I believe there are a little over sixty riders in Texas. There’s one per territory. My territory is about thirty miles northwest of Laredo on Mines Road. My dad used to own a dairy farm in this area, and I would see the tick inspectors back then, unloading and loading their horses, and I’d stand there just looking at them. Every day I would look at that person, at that gentleman, saddle up his horse and go on, and I’d think to myself, I’d dream to myself, “One day I’ll be a tick inspector.”

On a typical day we get up at six in the morning and feed the horses. Frankie Sullivan—he lives at the same camp I live in—he’s got a couple of horses and I’ve got three, and we drink coffee, wait for the horses to finish eating, saddle up, and I go my way and he goes his way. A typical ride is anywhere from five to seven hours. In the afternoon we might do a short ride, like a one- or two-hour ride, and then we’ll do what we call a 722. It’s a form that we fill out every day. Everything we do, we fill it out on those 722’s.

We look for tracks. Let’s say I’ve got five thousand acres of property that’s vacated. We make sure that there’s no cow or livestock tracks, and if there is, then we need to find the livestock and check if it’s a stray native or a stray Mexico. Sometimes it’ll have brands, which makes it easier because we usually know the markings of the livestock owners in our territory. If we see something unfamiliar—like no brand or lots of brands—then we’ll take a closer look. Sometimes it’ll have metal ear tags; Mexico’s got a 28-number ear tag and Texas has got a 74-number ear tag. The Mexico government does not have any rules or regulations for the livestock, so those are the ones we really want to apprehend before they infest the American cattle industry. If we let one go, it’ll devastate the growth of the livestock, ruin the hides, the milk production on the mama cows will decrease, and it’ll cost enormous money to control.

So if it’s a Mexico livestock, then we scratch it and see if it’s clean of fever ticks or any other foreign disease. We scratch one animal at a time. You don’t actually comb the hair, but you kind of part the hair to the best of your ability. We run our hands over as much of the animal as we can, with two inspectors on each side. We will run through the flank, the neck, udder, belly, back, everywhere, and if we feel a lump or a bump, we check it out. It could be mud or a thorn or just a common tick. An enlarged one is probably the size of a little pinky finger, I guess.

The last time we found fever ticks in my territory was about two years ago. It was on a ranch with over one hundred cows, and a lot of them—I’m going to say 75 percent of them—were infested. When we find ticks, we got to notify the rancher and quarantine the pasture and vacate 100 percent of all livestock. The land stays in quarantine for anywhere from six to nine months, and no livestock, hides, sand, gravel, or firewood can be moved out of that premise without our inspection and without us treating it. No equipment can be moved out of there either. It can be moved in, but to be moved out, we need to spray it. We treat with Co-Ral; we dip in that.

We’re like policemen that way. You know, when you need a policeman, you’re glad to find one, but when you don’t want one—that’s the way we are, I guess. The ranchers like us because we patrol the fence lines and see that there isn’t any intermingling with the adjacent herds, and some of us might temporarily repair a fence for the rancher, because the rancher is not at the moment present. But once we find ticks, well, heck, the ranchers are mad at us. Eventually they’ll get over it, and after six or nine months they’ll put cattle in there, and we’ll start all over again, and hopefully we won’t see any more ticks in a good while.

Our job is livestock, so we don’t get too much involved with illegals. We might come across some once or twice a week, depending on the area, but we’re solo out there—we’re not with another inspector—so we usually drop it. We have a walkie-talkie just in case there would be any trouble and a .357 Magnum pistol sidearm that’s issued by the government, and that’s only for protection. I’ve never used it, thank God. And binoculars and water—I take, like, half a gallon—and Wranglers, Wrangler shirt, boots, spurs, chaps, rope, tie-down, tie ropes. And the machete. Your trail overgrows real quick on you, and that’s one of our jobs, to maintain our trails.

I’ve been at this camp ten years, but those guys north of us, they’ve been at those camps at least twenty years. We got a shower, we got air-conditioning, we got a TV. We can’t see any picture, but we get the local channel, so we can hear the news. It’s a 14-by-64, the trailer house where we live in. It’s an old trailer house came out of New Mexico, but it’s livable.

Monday through Thursday night I’m here in camp. Friday through Sunday with my wife and my daughter, who is the 2007 Miss Texas Belleza Latina and also won the current Miss Belleza Latina International title. It’s kinda hard, missing her growing up. My wife had to do the daddy and mom thing for her, and I would get there to be with them on Saturdays and Sundays. But my wife is understanding to it.

That’s why you got to love it to be in this job. You can’t just say, “Well, I’m going to try it and see.” A lot of the tick inspectors are not doing it for the money; they’re doing it because they like it. I love everything about it. You’re kind of your own boss. Nobody’s there to tell you you need to do this, you need to go here. There’s no punch-in; you schedule your own appointments. To me it’s a heck of a good job, it’s one of a kind. I get to do the thing that I always dreamed about when I was growing up on my dad’s dairy farm and I used to watch the old tick riders ride away. That’s what I always dreamed—to be a tick rider one of these days.