In the late seventies and early eighties, Texas punk rock fixtures the Big Boys frequently closed out their sweat-drenched concerts with a rallying cry: “Now go start your own band!” While plenty of audience members were inspired to pick up instruments of their own, Austin native Pat Blashill took a different path: he started toting around his Canon TX camera to document the Lone Star State’s burgeoning punk scene in real time—often by wedging himself into nooks behind the stage during turbulent performances or by diving directly into the crowd’s tangle of limbs.

Blashill’s new photo book Texas Is the Reason: The Mavericks of Lone Star Punk (Bazillion Points, February 29) traces how the movement, much of it centered in Austin and San Antonio, pushed back against what punks saw as a repressive dominant culture (by, for instance, protesting at the 1984 Republican National Convention in Dallas). Throughout the eighties Blashill trained his eye on the simultaneous terror and thrill of live performances by the likes of the Dicks, Butthole Surfers, and Scratch Acid—where elbows and fists sometimes flew but concertgoers looked out for one another.

As Texas Is the Reason makes clear, the scene was less about the music than it was about the community that sustained it. And in his images of punks enjoying a late-night cigarette at Thundercloud Subs or styling their hair into jagged spikes in the bathroom of their parents’ house, Blashill brings Texas punk’s convivial spirit into sharp focus.

Lynda Stuart and Rene Miller at home in Austin, 1984.

J.J. Jacobson and Tony Johnson, the Offenders, at a political rally at the University of Texas at Austin, 1984.

Lynda Stuart and Rene Miller at home in Austin, 1984.

J.J. Jacobson and Tony Johnson, the Offenders, at a political rally at the University of Texas at Austin, 1984.

This article originally appeared in the March 2020 issue of Texas Monthly with the headline “Sound and Fury.” Subscribe today. 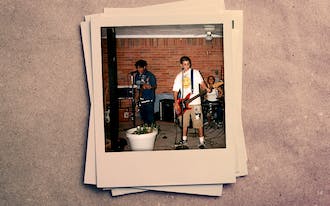 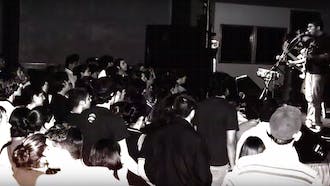