Out across the vastness of Texas, in between our densely populated cities and our large and medium-sized towns, lie our beautifully unbustling small towns. Such one-, two-, three-, or no-stoplight specks, with their slow pace, quaint squares,  and friendly folks, represent a concentrate of quintessential Texanness that even slick urbanites hold on to in their hearts. Many of these places  have withered away, and a few, celebrated elsewhere in these pages, have been revived by an influx of big-city refugees. But a fair number have managed to avoid both slow death and drastic change and remain, thankfully, much as they always were. Here are five such spots that the Texanist likes quite a bit.

Thalia, the fictional town portrayed in Larry McMurtry’s 1966 novel The Last Picture Show, was based on the author’s hometown, which hasn’t changed all that much since his boyhood. Out on the Panhandle Plains, the namesake seat of Archer County still exudes the wistful dustiness McMurtry captured so beautifully. Stay at the Spur Hotel, visit the Royal Theater, and stop by McMurtry’s Booked Up bookstore, which probably has an old copy or two of The Last Picture Show.

This little gem has everything a Hill Country traveler could hope for: a historic county courthouse, a refreshing namesake river, mile-high meringue pies at the Blanco Bowling Club Cafe, and a thirst-quenching taproom at the Real Ale Brewing Co., where the Texanist has been known to bend an elbow on occasion.

In the decades before the Civil War, Jefferson—situated on Big Cypress Creek and Caddo Lake—was the state’s  foremost inland riverport, a hub for steamboats traveling from New Orleans and Shreveport. There are no more Big Easy–bound riverboats these days, but Jefferson is filled with many worthy historic sites. So unchanged is Jefferson, in fact, that railroad tycoon Jay Gould’s personal train car is still parked here. And the town is still situated on the picturesque aforementioned waterways, also worthy of exploration.

Known as the gateway to the Big Bend, Marathon may be smaller than the far West Texas tri-cities of Alpine, Fort Davis, and Marfa, but it still has a lot to offer. Don’t miss the historic Gage Hotel, the Gage Hotel’s White Buffalo Bar, and the White Buffalo Bar’s famous Ranch Water, a whistle-wetting tequila cocktail that pairs perfectly with the parched Chihuahuan Desert. Also check out the smattering of galleries, including the Evans Gallery, owned by Texas Monthly contributing photographer James H. Evans, who ably chronicles the area’s natural beauty. And when the sun goes down, look up to see the darkest night skies and the biggest, brightest (four claps) stars in all of Texas.

The Texanist is a man who enjoys dropping a line into the briny deep (and briny shallow) on occasion and harvesting the fruits of the sea (and bays). In his mind, there is simply no better spot from which to do so than Rockport, which is located between beautiful Aransas and Copano bays, just a few miles north of the slightly better-known Port Aransas. In addition to the freshest of seafoods (Charlotte Plummer’s Seafare Restaurant, located in adjacent Fulton, will, for a reasonable fee, grill, fry, blacken, broil, or bake your personally caught fish), the Texanist also likes to savor the general saltiness of this idyllic seaside village, which was hard-hit by Hurricane Harvey, is still recovering, and would very much appreciate your visit.

Bandera: Find honky-tonk heaven at Arkey Blue’s Silver Dollar Saloon. Buffalo Gap: Three words: Perini Ranch Steakhouse. Canyon: Home of the state’s largest history museum, the Panhandle-Plains Historical Museum, and the country’s second largest canyon, Palo Duro Canyon. Fayetteville: Tiny and pastorally picturesque. Be sure to stop by the Red & White Gallery, which once featured a showing of illustrations of yours truly by the late famed artist Jack Unruh. Lexington: Say hi to Tootsie Tomanetz, the first lady of Texas barbecue, on Saturday mornings at Snow’s BBQ. Luckenbach: If it’s good enough for Waylon, Willie, and the boys, it’s good enough for you and the Texanist. Mercedes: The unofficial handmade boot capital of Texas. Salado: A heavenly respite from hellish I-35 in the Texanist’s home county of Bell. Shamrock: Come for fascinating remnants of Route 66, stay for St. Patrick’s Day. Turkey: Home of Bob Wills. Need the Texanist say more? 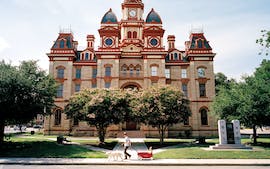 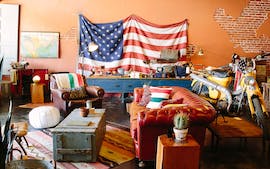 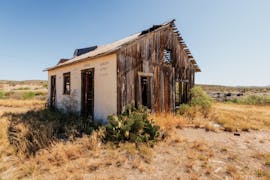 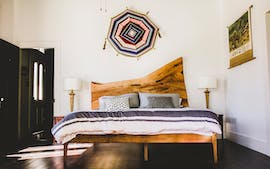 Where to Stay for a Small-Town Getaway