A note from the Texanist: In conjunction with this column, I invited Governor Greg Abbott to resurrect the annual gubernatorial Texas Week proclamation originally put forth in a resolution by the Forty-second Texas Legislature way back in 1932. Somewhere in the 85 years since then, the call for the governor to “issue and to publish annually his proclamation outlining the purpose and the spirit of Texas Week and urging every citizen of this State to exalt and extol the highest and the best cultural and spiritual values of Texas throughout Texas Week” was forgotten.

I am happy to report that as of March 2, 2017—Texas Independence Day—that Governor Abbott, perhaps accepting the Texanist’s nudge, issued an official Texas Week proclamation.

Thanks to the governor and happy Texas Week to all. 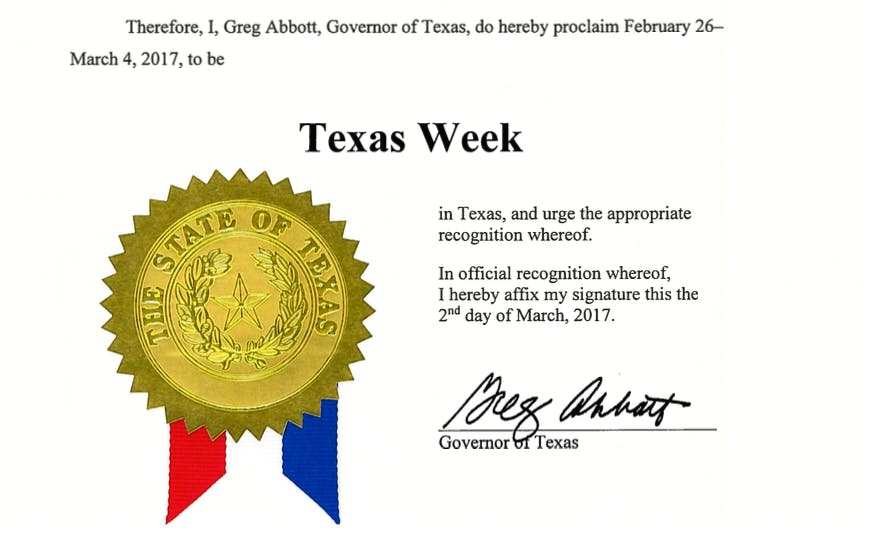 You can read the governor’s full proclamation here.

Springtime is a splendid time in Texas. The melancholy and malaise of the waning winter begins to give way to budding trees, greening flora, and the beautiful Texas wildflowers. The skies are sunny and clear and the air is freshened by subtle wafts of freshly cut grass. And spirits, like the mercury, are on the rise all across the state. Indeed, if you take a moment to soak it all in, you’ll find the overall ambience to be quite palpable. The Texanist has claimed in this very space to be perfectly acclimated to all the seasons in Texas, but if he were forced to choose a single favorite time of year, it would be spring.

As any Texan with a seventh-grade education can tell you, it was precisely this time of year in 1836, as the Alamo was under siege in San Antonio, that a group of revolutionary proto-Texans convened at Washington-on-the-Brazos to declare independence and establish a sovereign republic. And although this would be a great spot for a lengthy digression into the colorful particulars of the events leading up to and subsequent to that historic meeting, it goes without saying that March 2 has been a prominent date on Texas calendars ever since those glory days of yore.

Over the past 180 years, the customs by which Texas Independence Day is acknowledged have varied. Surprisingly, it wasn’t until 1874, decades after the Republic of Texas had folded up and joined the United States as the twenty-eighth state, that March 2 received official recognition by the state legislature as a holiday (of the partial-staffing sort though it may be). But at least since that time, Texans far and wide have recognized the momentous date with barbecues, rodeos, parades, speeches, battle reenactments, chili cookoffs, dances, flag flying, and cannon firing, with the last being an actual Independence Day commemoration begun in Austin in 1897 by a group of fired-up University of Texas law school students.

The resolution that brought Texas Week to life was born of the third called session of the Forty-second Texas Legislature of 1932 and is a haughty document filled with exceedingly puffed-up parliamentary prose. At the same time, despite the floweriness, it is really kind of beautiful. Take the opening stanza:

Whereas, the State of Texas is an empire within itself, vast in its area, unparalleled in the glory of its heroic deeds and chivalric history, unrivaled in the splendid progress and achievements of its brilliant past, unmatched in the marvelous opportunities of its inspiring present, and unlimited in the resources and possibilities it has in store for its citizens ever in the future . . .

The document sets aside the entire week in which the second of March falls and dubs it Texas Week. Texans are urged to “exalt and extol the highest and the best cultural and spiritual values of Texas.” Additionally, Texans are encouraged to hoist the Texas flag from prominent points and to take schoolchildren to battlefields and other places of historical importance. Generally, citizens of the state are called on to remember how we got here, look forward to where we may go, and give thanks for being Texan.

Interestingly, the Texas Week resolution makes it very clear, at multiple points and in no uncertain terms, sort of like a scolding parent, that Texas Week is not to be construed in any way as a weeklong holiday. Instead, it beseeches Texans to work during Texas Week. And, further, to “work a bit better” than during the other weeks of the year. The same goes for students and their schoolwork—better work than normal during Texas Week. Calling for Texans to honor their Texanness by way of harder than usual work is very Texan.

But just as a strong work ethic is a legendary Texan trait, the flip side is also true: the Texan’s reputation for letting the badger out on occasion is equally well-known. For this reason, the complete absence of any call for statewide merriment or the imbibing of any celebratory libations is a little surprising. This was, however, a time when the devastating realities of the Great Depression were setting in, and a year before the dreadful drought of Prohibition would be lifted.

Times have changed, thankfully, and in addition to taking a moment to “recall and extol the unselfish services of our heroes, to review our glorious history and splendid achievements of the past, to sum up our present opportunities which are offered in such abundance by this Lone Star State, and to visualize the rare possibilities that are in store for our most auspicious future,” the week of Texas Independence Day also provides an excellent opportunity for Texans to raise a glass with friends and fellow countrymen and countrywomen. And to bask in the shared blessing of being Texan.

The Texanist’s Little-Known Fact of the Month: The statute creating Texas Week exists as Article 6144a under Title 106 in Vernon’s Civil Statutes. The previous entry in that section, Article 6143bb, designates the long-lost “Bluebonnets” as the official state flower song, a tune so obscure that the Texanist has never once ever had the pleasure of hearing it.

The Texanist: How Do You Become an Honorary Texan?

The Texanist: Do We Really Want Texas to Be “Wine Country”?