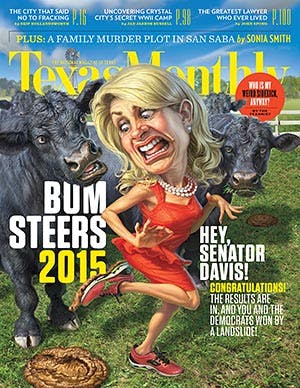 Last February, after Uber, the app-based ride-sharing company, announced its intention to enter the Houston market, local cab drivers crammed into a city council meeting wearing bright-yellow T-shirts with slogans like “Fair Play = Same Rules.” They claimed that Uber, which usually charges less than traditional cabs do, has an advantage because its drivers don’t have to meet the same insurance requirements as most cabbies. By the time the city council granted Uber the right to operate, last summer, the debate had raged for months, and local cab companies had sued Uber and its rival, Lyft. Uber has faced a similar backlash in Dallas, where the city has yet to finalize new ride-sharing rules.

On the High Plains, though, things have been a lot quieter, as usual. Uber began serving Lubbock in June, and its arrival garnered little controversy. That’s largely because Uber arrived just as the city’s only traditional cab service was winding down operations; Jim Sexton, the owner of the town’s decades-old Yellow Cab Company, had decided to retire, and no new buyer had emerged. But it certainly didn’t hurt Uber’s chances that the city also has a ready-made market for its service: thousands of smartphone-wielding Texas Tech students.

“If Lubbock had a traditional cab service, I would still use Uber,” says Wesley Mitchell, a business-marketing major from Sydney, Australia, who uses the service every couple of weeks, mostly for rides home from bars or parties. “I’ve found that it’s cheaper than a normal cab fare, and Uber drivers are on time and efficient.” Students like Mitchell are a key part of Uber’s expansion plans. Soon after arriving in Lubbock, the service said it would target 22 other college towns across the country, including College Station and Waco.

College students are a natural market for Uber because they’re comfortable with disruptive technologies: they listen to songs on Spotify, cherry-pick the best skits from Saturday Night Live on YouTube, and stay in touch with friends via Instagram. To them, Uber is just another newfangled way of doing things that quickly feels familiar. Unlike traditional cab companies, Uber enables customers to “hail” rides on a smartphone app from drivers who use their personal cars. The app allows a customer to track the approach of the vehicle and provides an estimate of the fare before it arrives. The fares are disbursed by a mobile payment system, so no cash changes hands.

And Lubbock, of all places, was ready to offer a glimpse of this newfangled urban future: a place where cabs, with their garish paint jobs, rooftop status lights, and arcane meters, will have disappeared, replaced by a legion of greige Corollas and sleek Odysseys with top-flight sound systems.

Or so it seemed. In early November, something funny happened on the way to the future: local couple Ed and Jarita Pascasio made an offer for Yellow Cab, which Sexton accepted. The Pascasios began service a few weeks later, after they passed the city’s application process, which Jarita calls “pretty intensive,” while noting that Uber doesn’t endure the same sort of scrutiny.

But Jarita isn’t donning a yellow shirt and marching on city hall. She’s confident her company can compete. A lot of the city’s elderly and disabled, she says, are still more comfortable with traditional cabs. She’s not giving up on the college students either. “We’re putting in a new dispatch system,” she says. “It will have an app similar to Uber, and you’ll be able to book a cab online. It should be competitive.”

Perhaps. But Mitchell, for one, isn’t likely to change. “I feel more comfortable riding in Uber cars than taxis,” he says.