Halt and Catch Fire (AMC, August 23)
In its third season, this underrated cable drama about the early days of the computer industry leaves behind its Dallas setting for Silicon Valley, which gives Plano-raised co-creator Christopher Cantwell the opportunity to make some smart cross-cultural comparisons. Says one character trying to navigate the treacherous waters of venture capital: “At least in Texas they stab you in the front.”

The Jealous Kind, James Lee Burke (Simon & Schuster, August 30)
Burke’s umpteenth novel—his last one, the excellent House of the Rising Sun, came out a mere nine months ago—is the latest installment in the multigenerational saga of the Holland family, whose travails add up to a fictional history of Texas. This time the setting is Houston in the fifties, a place populated by thugs and mobsters, with nary a sock hop in sight.

Pearls to Swine, Adam Torres (Fat Possum, September 9)
This Austin songwriter’s third album stakes a claim to the sort of high lonesome vibe that fans of Nick Drake and Bon Iver hunt for high and low. Lots of musicians could string together the words “midnight out across the open plain”; few of them have the sort of spooky, well-honed falsetto that will put you right in that desolate landscape, with the wind whipping through your hair.

Other People, directed by Chris Kelly (September 9)
Dallas native Jesse Plemons finally gets the big-screen starring vehicle he’s worked toward since his Friday Night Lights breakthrough. Playing a gay television writer who returns to his religiously conservative home to care for his dying mother, Plemons deftly balances grief with more-lighthearted frustrations. Though hardly a comedy, it’s too funny to be maudlin.

My Piece of Land, Amanda Shires (Silver Knife, September 16)
With country-producer-of-the-moment Dave Cobb behind the boards, fiddler-singer-songwriter Shires pulls back from the studio effects of her previous album to make a musically and lyrically spare record focused on some very adult concerns: home (including a song about Mineral Wells, where she spent much of her youth), family, marriage, and impending motherhood. 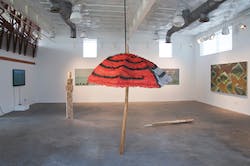