In August 1997, Texas Monthly writer Skip Hollandsworth read a short newspaper article about Bernie Tiede, a young mortician in the East Texas town of Carthage, who had just confessed to shooting a wealthy 81-year-old widow, Marjorie “Marge” Nugent, four times in the back and burying her in the deep freeze in her garage, where she remained for seven months before anyone started looking for her.

That very day, Hollandsworth drove to Carthage. He watched in disbelief as the townspeople rallied around Bernie and begged District Attorney Danny Buck Davidson to drop murder charges. Hollandsworth quickly realized he had walked into the strangest murder story—at times horrific and at times hilarious—of his career.

In the first of our Texas Monthly Trove series, follow Hollandsworth through the journey of exploring and writing this all-time great Texas Monthly piece about a crime that was truly stranger than fiction.

Richard Linklater, Matthew McConaughey, and Jack Black Are Holding A Fundraiser For Bernie 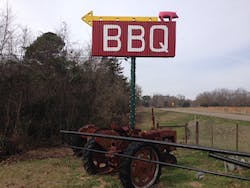