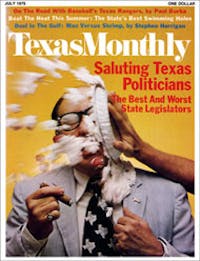 What probably first caught my attention about Janis Joplin was a song that she had thoroughly forgotten by the time I heard it. “So Sad To Be Alone” it was called and hearing it for the first time was a moving experience. I have seldom heard anything better. The song was just her lonesome, world-weary voice accompanied by her autoharp and it was recorded by a fan’s tape recorder in the early Sixties when she was in Austin.

She sang in a voice that still haunts me, about the lure of the open road—Kerouac was still an influence then, remember—and of the people she met on that road: “It’s sad, so sad to be alone. It’s sad, so sad to be alone. No friends to help you, no family or home. It’s sad, so sad to be alone.” Those verses were always to define Janis for me, no matter what she did or where she went. Even had she not become an important singer, I would have felt a permanent affinity toward her, for we were, for better or worse, children of the Fifties and, importantly, children of Texas in the Fifties. It was not a rewarding time or place, overall, to struggle through adolescence. It was rough as hell, as a matter of fact, and I maintain that it left Janis emotionally scarred and helped drive her to the excess that eventually took her life.

There has already been enough garbage—both maudlin and acrimonious—written about her childhood in Port Arthur and those early days in Austin, but in assessing her musical legacy it is essential to take into account the total tedium and simultaneous cruelty of high school in basically any conformist-minded town. There probably is no mental cruelty as severe as that of an established group toward a misfit, an ugly duckling, or a rebel. Joplin was all three of those. She had to flee, and I’ll always wonder if she ever realized that you can run only so far. Just before her death in 1970, she went back to Port Arthur for the tenth reunion of her class at Thomas Jefferson High School. I still think she went just to try to stop running—it didn’t work. I’ll never forget her haunted eyes at that tawdry reunion as her classmates—who ten years before had regarded her as merely an aberration—either tried to play up to her or treated her like a side-show freak.

All those memories of Janis were brought back to me by the recent release of a two-record album called Janis Joplin (Columbia). The first half is a part of the sound track of the documentary movie Janis. It’s a disappointing movie, and the record is even more of a letdown.

One probable reason the documentary fails is that her parents demanded (and got) approval rights of all footage used. Perhaps that’s why her death is not mentioned at all in the movie, which consists mostly of sequences of her performing on stage and being interviewed, along with clips of the high school reunion and the reporters there—half hostile and half fawning—asking her if she was ever invited to a high school prom. The movie sound track part of the album is only valuable insofar as it presents variants of her usual repertoire—“Ball and Chain,” “Summertime,” “Maybe,” “Mercedes Benz,” “Me and Bobby McGee,” “Try (Just a Little Bit Harder),” “Move Over”—mixed with isolated bits of interviews (she is witty on the Dick Cavett Show; pathetic in a stage rap in Toronto as she talks about how to score with men). Oddly, two songs from past albums (“Piece of My Heart” and “Cry Baby,” two of her strongest) are patched onto the sound track, indication just how little good stage material the film’s producer, F.R. Crawley, had to work with. Joplin was an incredible performer in person, capable of an intensity unmatched by any other contemporary singer. Unhappily, the sound track only hints at that power.

The other half of the album Janis Joplin has some genuine rewards for the Joplin audience. It consists of seventeen early performances, thirteen of which were recorded in Austin in 1963 and 1964, the remaining four being some amazing cuts with the Dick Oxtot Jazz Band in San Francisco in 1965. On “Black Mountain Blues,” “Walk Right In,” “River Jordan,” and “Mary Jane” (a not-so-subtle paean to marijuana), she sounds like the all-time queen of swing.

The Austin recordings are valuable only to the true Joplin fan or to those who encountered her in her Austin days. There are better Austin recordings than these; specifically, a whole series of tapes mostly recorded at Threadgill’s on North Lamar. They’ve been circulating among collectors for years and I’m surprised that Columbia didn’t locate more of them. Three powerful performances were included as a stapled-in record in Janis, a 1971 quasi-biography by David Dalton. Those three—“Nobody Knows You When You’re Down and Out,” “St. James Infirmary,” and “Walk Right In”—reveal Joplin on her way to becoming a professional singer. Still unsure of herself at the weekly drunken hoots at Threadgill’s, she nonetheless gives a strong indication of things to come.

The Austin performances that are included here range from “Trouble In Mind” through “No Reason for Livin’” and “What Good Can Drinkin’ Do” to “Careless Love” and “I’ll Drown In My Own Tears.” They are an obvious attempt, I think, at presenting a transparent and overly simplified Joplin biography. But it’s not that easy. She was an extremely complex person: headstrong yet vulnerable, sensitive and at the same time bawdy to the point of embarrassment, ambitious and self-defeating. Rock music has not been kind to its gods and goddesses; I suspect that only toward the end did she begin to sense that she could never give enough of herself to satisfy the insatiable and fickle public maw. When she tried to balance her public personality against what there was of her private life—not much, pathetically—a profound depression set in. That, coupled with a self-destructive syndrome common with Southern musicians who struggle to escape from a sort of Deep South oppression, would be enough to destroy any three strong persons, let alone one vulnerable woman who claimed to live only for today.

Janis had an obsession to be the best, and all that mattered for her was getting there and finally being acknowledged as a special person. Until the end, she resented any lack of recognition, such as the time she was preempted from the cover of Newsweek by Dwight Eisenhower’s death. “Fourteen heart attacks,” she said, “and he had to die in my week.” She was frantically egotistical, but also warmly and frankly human. She also did for white teenaged audiences what no one else in the alleged psychedelic era could do—she tapped their deep, fundamental emotions when she sang. (Of course, that whole misnomer of psychedelia needs an overhaul. Anyone who calls her music “acid rock” needs a good telling off: it was nothing but gut blues and she remains the modern master of that genre.)

Unfortunately once she got to the top, she never fully realized it. As a result, she sought constant reassurance that she was the best, that she was loved, that she was needed. That shows up in all her recordings, from the earliest in Austin to the last studio appearances. She was tough—that’s apparent in almost all her songs, but she wasn’t tough enough to reconcile the public and private Janis.

That’s why, even though I’ve never been in favor of bootleg records, I would be the first to applaud if some philanthropist would subsidize the free pressing and distributorship of the many Austin tapes before they disintegrate. Especially such special songs as “So Sad To Be Alone,” “DeKalb Blues,” and “Railroad Blues.” She literally poured herself into a small body of songs, not all of which made it onto Mainstream or Columbia Records. They are extremely ragged and uneven, just as she was, but I wouldn’t trade them for anything. She was ultimately unable to do much about her life other than to pour her guts out on stage. The audience was the only true love she ever knew. Now, the bits and pieces of her life are nothing but marketable keepsakes.