Dear Unsuspecting Public, Jimmie Durham Is a Trickster” might have made a clever title for the current retrospective at the Whitney Museum, which showcases Durham’s witty art on Indian themes, including a framed display of his “real Indian blood.” Instead, the title sat at the head of a recent op-ed on the website Indian Country Today that denounced Durham as a white poseur with no Indian ancestry.

The accusation has cast a pall over the show and offered a new image of the 77-year-old artist: that of a charlatan fortune hunter, a Houston boy who lit out for the territories, went “native,” and became an international art star. By wit and wiles, in his work and life, Durham has managed for decades to shape-shift while avoiding a reckoning—until now.

“Jimmie Durham: At the Center of the World”
Through Jan. 28
Whitney Museum of American Art, New York City 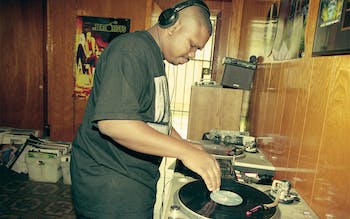