When comedian and former Daily Show correspondent Jordan Klepper was looking for his next TV project, he decided he wanted to get back into the field. His previous series, The Opposition with Jordan Klepper, was a Colbert Report–style right-wing satire. (Instead of parodying Bill O’Reilly like Colbert, Klepper’s persona was closer to that of Alex Jones.) The format kept Klepper mostly behind a desk, so he was ready for something different. “The idea was: Let’s go look at the battles that Americans are fighting, try to get up as close as we can to it, and see how tough it is for Americans to make a change,” Klepper said.

His new eight-episode docuseries, titled simply Klepper, which premieres at 9:30 p.m. tonight on Comedy Central, has already made news. Klepper got arrested at an immigrant rights protest in Atlanta in February, and last month he brought Hillary and Bill Clinton a copy of the Mueller report to read on camera. (Hillary does her best Donald Trump impression, bellowing, “Oh my god, this is terrible. This is the end of my presidency. I’m #^$&*#!”)

While Klepper tracks stories all over the country, it can’t stay away from Texas. Klepper and his wife have “kind of fallen in love with how unique a place [Texas] is. It was not the box that I originally put it in,” he told me.

In the debut episode, Klepper visits Killeen, where he meets three Iraq War veterans—Eddie Wittern, Jan Ohrstrom, and John Brazier—who are struggling with post-traumatic stress disorder and trying to move past it by performing as professional wrestlers for audiences in American Legion halls and community recreation centers. Calling themselves “The Valhalla Club,” the vets are are all hams. Wittern goes by “El Guero” in the ring and covers his face in malevolent clown paint. Ohrstrom wears leather, adopts rock star posturing, and calls himself “Dynamite.” Brazier dives deep into character as a ladies’ man he calls “Brysin ‘Mr. Studtacular’ Scott.” As Klepper makes clear, the pageantry and camaraderie of wrestling have served as a successful form of therapy for them all.

Before the premiere, we talked with Klepper and Wittern about the episode, the tricks of stand-up comedy and wrestling, and using creativity to help overcome PTSD.

Texas Monthly: Jordan, how did you find these guys?

Jordan Klepper: One of our producers saw a story that focused on Eddie in Rolling Stone. We were looking for interesting characters, and we had also been looking at a few other pieces that were dealing with PTSD. This was such a great example—these really interesting characters who were finding a positive, unique way of dealing with an issue that is obviously very serious and can be very dark.

TM: Eddie, what did you think when you heard that Jordan and Comedy Central were interested in your story?

Eddie Wittern: I kind of thought it was a joke. Then I was like, “Wait, no, hold on, I gotta read this email again.” And then I read it like four more times, and I jumped up and down, and I was like, “Yes, this is going to be great.” And then the other part of me was like, “Oh jeez, I’m a big dumb animal, and I really hope I don’t sound stupid.” So it was a whole lot of things all at once. When I told the guys about it, they were just like—Bryson dropped the phone, Jan was like, “Yeah, expletives, this is all great.” Now that it’s getting ready to come out, people are seeing me on Comedy Central on the commercials. That’s surreal to me: watching South Park and then being like, “Hey, that’s me. Holy crap.”

JK: I’ve always seen you as somebody who looks good up against Cartman, Eddie. I feel like you and Cartman, you make a good team.

EW: I think so. I’d totally tag with Cartman. Man, he’d be awesome.

TM: Jordan, you’re used to crowds, but was this your first experience wrestling?

JK: First and perhaps last. I was shocked by how intense it was. I really thought it was much more fake. One of my favorite moments was Eddie had me hit him with a stick and told me that I could really let loose on him. I did that, and then he turns, and he starts bleeding out of his head. I think he’s faking, but he won’t drop the bit, and for ten minutes he’s just gushing out of his head making me feel terrible.

Then, of course, he finally tells me, “No, don’t worry, I cut my head with a razor blade,” which to me seemed insane. I didn’t know the rules anymore—what’s real, what’s not real. Even the things that are fake are “heads that are cut with razor blades,” which, to me, is still a crisis that needs addressing. “I’m like, for God’s sakes, you’re bleeding!” But I loved it.

TM: Jordan, this episode seemed like a lot of fun to shoot, but why did you choose it to be the one to tee up your entire series?

JK: I see the series as a glimpse at what American activism looks like in this day and age. The idea was: Let’s go look at the battles that Americans are fighting, try to get up as close as we can to it, and see how tough it is for Americans to make a change. Some of those are people actively fighting for political movements. Some of those are just people fighting their own personal issues and finding communities in which they can push through as well.

This one sort of immediately jumped out. Everybody was so compelling and thoughtful. People who watch this episode, they’re going to love the guys and see how badass they are. And, you know, it is Comedy Central, so in the end I put on a Speedo and get body-slammed through a table, so there’s a good chance we might lead with that.

TM: Eddie, besides seeing how badass you are, what do you want people to get out of the episode?

Eddie: Jan, Brysin, and I were really looking forward to being able to get our message out there about PTSD—whether it’s from the military, whether it’s from first responders, even from personal trauma, personal assault situations, and stuff like that. Just getting out the message of moving past it and trying to do something positive with that negativity that you’re carrying around.

JK: I give Eddie a lot of credit. We had great conversations about how there’s not one cure-all, but there’s a day-to-day struggle. And I think seeing the community that came out to support everybody, there is a way through these issues through finding other people who care.

EW: You can sit in a hole and dwell in it, but that doesn’t move you forward. PTSD comes from being overwhelmed in a situation that you can’t control, and you gain control back by figuring out what it is that bothers you and then doing something with it in a positive way. I’ve seen guys that make knives in a forge. One of my good friends is an exotic dancer; that’s how he deals with his PTSD.

TM: And Eddie, I saw in the episode that you don’t just wrestle in face paint—you’re also a stand-up comic. There’s a scene in the episode where you’re performing at the Velveeta Room on Sixth Street in Austin.

TM: Was Jordan coaching you?

EW: He was in the front row. The whole time he’s like, “Slow down.” The joke is that I’m a waste of cocaine and steroids, even though I’ve never done coke. I just gotta go really, really, really, really fast, and I speak like a thousand miles an hour because that’s how fast my brain goes. So I really had to slow down, let it register, and then reengage with the audience.

TM: Jordan, was that a lot of fun for you?

JK: Eddie is a man of a ton of talents. When we found out that he was doing stand-up, that was great. Comedy is a way you can kind of play off expectations, and Eddie does that right off the bat with his stand-up. He’s going to call out, “Look, you’re going to see me as this big tough guy and this big veteran, and I’m going to be able to make fun of some of those things that you might have assumptions about.” That’s a powerful thing.

TM: Eddie, what was Jordan’s greatest asset as a wrestler?

EW: When we did the show [in Marlin, southeast of Waco], Jordan’s natural charisma showed through. They just knew immediately, man, we hate this guy.

JK: I got to play the heel, and when you’re the heel, you are the bad guy. They will stand up, and they will boo you. You don’t need much of an introduction other than tipping your hat that you’re the bad guy in this situation.

EW: The crowd loved it. They were just over the moon with it.

JK:  I loved being invited into that world. It was such a blast to get in there and do that. To hear a crowd … what’s so amazing about a wrestling show is, like, the crowd, they know how they feel about you immediately. It was a great time in Texas too. I will say everybody came out. It was a real special night.

TM: Eddie, I know what’s in store for Jordan after this episode airs. He’s got seven more episodes. What about you?

EW: If I get this contracting gig in Iraq, my fiancée and I are going to buy a house down in San Antonio. So we’ll see how it goes.

TM: Would you still do the contracting gig in Iraq if you got a Comedy Central show?

EW: Well, I guess I would do that.

TM: You could do it from Iraq.

JK: I’d watch. Let me tell you, Eddie. Whether you’re in Iraq or Killeen, I’d watch.

Can Marijuana Help Veterans With PTSD? 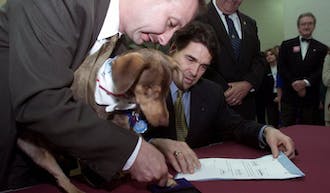 Police Should Be Educated About Laws Surrounding Service Animals 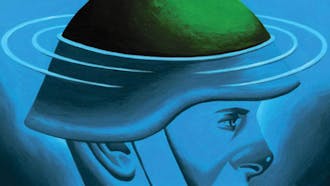