Given that country star Kacey Musgraves released an album titled A Very Kacey Christmas in 2016, it made sense that the Golden native would conclude her year-and-a-half-long post-Golden Hour victory lap by escalating her holiday spirit with a good old-fashioned made-for-TV celebrity Christmas special (in this case, made for Amazon Prime). The celebrity-studded Christmas special is a retro move, calling to mind cheesy midcentury superstars like Bob Hope and the Osmonds. But the holiday special has become somewhat de rigeur of late, and Kacey’s just adding herself to the category of John Legend, Chrissy Teigen, and Bill Murray, who have done their best this decade to make the Christmas special seem cool in the age of streaming.

Kacey’s not the only Texan celebrity to have thrown her cowboy hat into the Christmas special ring, though. In anticipation of The Kacey Musgraves Christmas Show, which lands on Amazon Prime this Friday, November 29, here’s a look at other Texans who have used their star power to celebrate the holiday season.

San Antonio comedienne Carol Burnett didn’t technically have her own Christmas special. But she and her writers crafted plenty of holiday sketches over the twelve years that The Carol Burnett Show aired on CBS. There was the episode where the Higgins family exchanges gifts (along with passive-aggressive remarks), as well the one where Santa Claus shows off his Richard Nixon and Ronald Reagan baby dolls (“you wind this up, but it won’t admit it”). Another scene depicted the holiday toy store duet of “Nobody Does It Like Me,” between Burnett and guest star Alan Alda. You can scour the internet for clips or invest in one or both of the DVD compilations, Christmas With Carol and Carol’s Lost Christmas. Considering that The Carol Burnett Show was the platonic ideal of a variety show entertainment, the effort and expense will surely be worth it.

In addition to being one of only two American Idol winners to ever actually become an American idol, Fort Worth native Kelly Clarkson is a true entertainer. Her live performances are energetic as heck, “Since U Been Gone” will bring down the house at most karaoke bars, and her covers are often refreshing, fun takes on original numbers. Take, for example, the first song she sings in her 2013 NBC special, Kelly Clarkson’s Cautionary Christmas Music Tale. With a full band and a glittery set behind her, Clarkson’s version of Chuck Berry’s “Run Run Rudolph” is an argument in favor of the celebrity Christmas special. It’s cheesy, sure, but it’s also vibrant, joyful, and over the top, and everyone involved seems to be having a wonderful time. You can see for yourself on Youtube, which has the special in almost its entirety. For copyright reasons, it doesn’t include Clarkson’s performance of “Silent Night” with Trisha Yearwood and Reba McEntire, but you can watch that here. And please do, because it includes some incredible harmonies.

Claiming the late Chewbacca actor Peter Mayhew as a Texan is a bit of a stretch, since he’s English and filmed the notorious Star Wars Holiday Special decades before he married a Texan and settled down in Boyd, where he passed away earlier this year. But I would be remiss to not include The Star Wars Holiday Special on this list, because it is absolutely bananas. The TV movie, which aired in 1978, was the first follow-up to the wildly successful Star Wars film. (Side note: the special is actually the first text that introduces the bounty-hunter character Boba Fett.) It’s not really a Christmas special, per se, since its primary holiday concern is the Wookiee planet’s Life Day, a pagan celebration of, you guessed it, life. The plot revolves around Han Solo and Chewbacca’s attempts to get the latter home to celebrate the holiday with his family: that’s right, Chewbacca has a wife and son, Mallatobuck and Lumpawarrump. I don’t know if I can, in good conscience, recommend that anyone watch this thing, though a bootleg version is availably on YouTube. But I think it’s important to remember—especially when there’s a new “Star Wars” right around the corner—that this franchise, while very fun, is ultimately very silly. Happy holidays!

A Colbert Christmas (with Willie Nelson)

Stephen Colbert is not a Texan, but when he was making his 2008 Christmas special, A Colbert Christmas: The Greatest Gift of All!, he wisely cast the greatest Texan of all: Willie Nelson. Willie, who has already gifted his disciples with “Pretty Paper,” one of the objectively best Christmas songs of all time, added another instant classic to his catalog. “Little Dealer Boy,” a duet with Colbert, posits a world in which Willie is something of the fourth wise man, presenting the newborn baby Jesus with a gift much danker than frankincense and myrrh: cannabis. A Colbert Christmas, which is available on Amazon, would like to remind viewers that a Christmas tree isn’t the only green plant you can celebrate the season with.

Admittedly, I often forget that Abilene native Jessica Simpson and Nick Lachey were once a thing. The former couple released Nick & Jessica’s Family Christmas in 2004, at the height of their united celebrity, between seasons of their reality show Newlyweds: Nick and Jessica, and two years before their divorce. The special has all the cringeworthy features one might expect from a Simpson-Lachey joint: jokes about Jessica’s intelligence, canned laughter, gratuitous Ashlee Simpson cameos, and a forced appearance of good old-fashioned, church-sanctioned domestic bliss. It feels both extremely dated (like something from the early seventies) and something that could only have come to pass during the uniquely bizarre early aughts. You can stream the whole thing on YouTube if you want to jog your memory for that culturally confusing time. 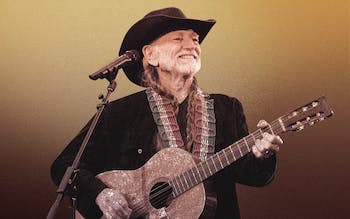