Karl Lagerfeld wants you to know that he loves Texas. So much so that he will stage Chanel’s next Métiers d’Art show in Dallas in 2014. “I love Texas. I love Texans,” the French designer told Women’s Wear Daily‘s Marc Karimzadeh:

WWD: You have also taken various [Ready to Wear] collections — not the major collections for spring and fall, but the pre-collections, the special collections — [out of Paris] and just did a big show in Scotland. How important is it, do you think, to leave Paris for a collection?

Lagerfeld: It’s very important to do it in a very special way, because today, everything is shown on the Internet and on television. When you have a show with only a girl coming out of the door, crossing a runway, it’s OK for fashion freaks but the public get bored very quickly. There has to be some magical surrounding. That’s why I went to Scotland to this castle where Mary Stuart was born, and it was quite a magical moment. To do the opposite, next time, in a year, I will go to Dallas. You know why? First of all, I love Texas. I love Texans. There’s another reason. When Chanel reopened, the French press was beyond nasty. The only press that understood it immediately was the American press, and Neiman Marcus gave her the Oscar for her collection, so I think it’s a nice thing to go there.

He said he tries to find a “vague connection” between the collection and the place it is shown. “With Texas, it’s a detail, but with little detail, you can make a whole story. I am a storyteller for that,” he explained.

At New York Magazine‘s The Cut, Charlotte Cowles is eager to see what Karl will dream up: “Now we have all year to imagine all the Texas-themed accoutrements, like quilted saddlebags and pearl-studded spurs,” she wrote. And the Huffington Post‘s Rebecca Adams celebrated the news in a post illustrated with a photoshopped photo of Karl in a cowboy hat. “Obviously, we have no complaints about this — anywhere that serves barbecue and Tex-Mex is great in our book. But does this mean that Chanel will go western? Will we see Chanel cowboy hats? Chanel spurs?? We’ll just have to wait and see what happens in Dallas. Whatever he puts down the runway though, we’re really hoping to hear him say ‘ya’ll’ at least once. That would be quotable,” she wrote.

Of course, Lagerfeld has long been a fan of Texas. Thirty-three years ago, Houston unfurled the purple carpet for Lagerfeld, who was in town to premiere his 1979 Chloé collection at the Neiman Marcus on Post Oak. So, what did Lagerfeld have to say about Western wear back then? “Yes, he likes Western wear, a look that is ‘as classic as the English raincoat,’ but no, he doesn’t think that he should do it in Paris when it is done so well here,” Michael Ennis wrote in his July 1979 Texas Monthly story, “Haute as a Pistol,” on Karl’s visit.

“Lagerfeld tells me he likes Texas because Dallas and Houston are such slick, cosmopolitan, modern cities, full of extremely well-dressed people. This is the place where the future is going to happen,” Ennis wrote.

Ennis recounted the scene on the tarmac at Hobby Airport as Lagerfeld’s plane landed:

The purple carpet (purple is Karl’s favorite color) is aligned with the aircraft, the door opens, and Lagerfeld appears. He is the epitome of what the French call soigné, or what we would call exceptionally well turned out. Immaculate from head to toe, Karl has his hair pulled back slickly across the top of his head, ending in a neatly curled little ponytail. His plum-colored jacket is matched by a plaid tie with a pearl stickpin against a mauve shirt with a white collar; the white is picked up in the chic touch of white socks between brown tassel loafers and khaki slacks. He considers the scene for a few seconds, and then descends into the reception maelstrom.

The band plays “Rocky” and then some disco tunes, and the fashion execs get their bouquets. Lagerfeld poses in front of the longhorns, smiling even though “The Eyes of Texas” is blaring into sacroiliac, the photographers go crazy, and suddenly Raymond wheels and starts filming the shutterbugs. For some reason his gesture is shocking, almost like a GI in a firefight turning on his buddies. Lissa is hopping around like a coked-up kangaroo, and I am getting the same rush: glamour, panoply, squads of pleading paparazzi, and over all the heavy musk of big bucks. It feels so good, it must be addictive. …

So, how was the party? Let Ennis describe it for you:

That evening at Neiman’s Post Oak store cocktails and champagne are served prior to the “special invitation only” premiere of Lagerfeld’s 1979 Chloé collection. The music by the River Road Boys is strictly country-and-western, but the crowd is big-city eclectic. Young gays rub elbows with old rich, unconstructed jackets jostle with dark suits, and glamour girls in sheer, clingy things and cabaret costumes prowl the floor. It seems that string ties are the in thing for men this season, and then there is the menswear fashion fringe: the cowboy glitter look, represented by suede chaps with a big fur trim or the tight black leather vest worn sans shirt and jacket and topped with a matching cowboy hat. For the ladies, hair up and tightly coiled in forties styling is a popular touch.

The trip included a night at the honky-tonk in Pasadena, Gilley’s, but Karl, wearing a dark three-piece suit and carrying a “wooden Egyptian-style fan about the size and shape of a ping-pong paddle” declined to ride the famous mechanical bull. “A demonstration of the celebrated mechanical bull is underway, but nothing can get Lagerfeld to try it, not even after stout, silver-haired Lawrence Marcus removes his coat and climbs aboard,” Ennis wrote.

Lagerfeld was greeted by 80 Westchester High School Wranglerettes when he arrived at Hobby Airport in May 1979. 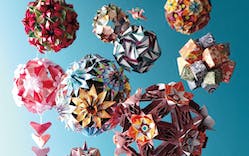 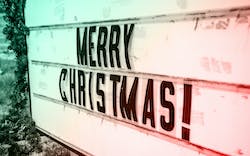 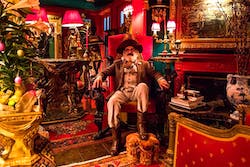