Does a movie you can only watch online still count as a major film release?

With Marfa Girl, Larry Clark is shocking audiences again. The transgressive director is best known for Kids, the controversial NC-17 drama that launched Chloë Sevigny to stardom in 1995, and Tulsa, his seminal 1971 book of photographs of his friends (and himself) as teenagers playing with guns and shooting up amphetamine.

Marfa Girl is Clark’s first feature in seven years, and the 69-year-old director hasn’t deviated from the world of teens. Or from the world of deviance. He’s all sex, drugs, and violence. Yes, still. And Marfa, with its population of 1,800 working class whites, Mexican-Americans, and artists living 68 miles from the border in the desolate grasslands of west Texas, serves as the perfect isolate–a petri dish for Clark’s controlled experiments in human depravity.

Clark, as the New York Times wrote in 1995, “is not happy unless he is working the outer limits of moral acceptability,” and Marfa, being the outer limits of Texas, grants his characters–a promiscuous artist (the “Marfa Girl”), a psychotic border patrolman (who’s aroused–literally–by violence), and the Mexican-American high schooler that the border patrolman harasses (but who is otherwise very lucky for a high school boy, if you know what we mean)–both more freedom and less: their wills are mangled by the endless expanse. Where to go. What to do. How to survive the endless waiting rooms of their lives.

So, these guys dabble in–you guessed it–drugs, weed and shrooms and they all sleep with one another, too. As the Hollywood Reporter wrote, “this wouldn’t be a Larry Clark movie if there weren’t at least one scene of a young couple going at it in graphic detail.” One? How ’bout at least seven.

But it’s not all the sex or the seemingly-obligatory-for-Clark rape scene that’s the most surprising thing about the film (though that scene, expected though it may be, is no less shocking and horrific). It’s Clark’s choice of distribution: Video on demand. Clark designed a website specifically to release the film–larryclark.com/marfagirl. Marfa Girl premiered there November 20, and “tiny passes” allowing 24-hour streaming access are available for $5.99.

Why would an iconic director fate his latest baby to an existence only on the mercurial Internet?

“F— Hollywood,” was the short answer that Clark offered at the seventh Rome Film Festival. (You can watch Clark’s full Rome interview here.)

“This is the future and the future is now,” Clark said of his decision in the Guardian. He elaborated further in an interview with Filmmaker Magazine:

I wanted to make a movie for the Internet. These days everyone one is on it–emails, social networks and all that. I have kids and they are constantly connected to it. I send them a message and they get back to me straight away. It’s so hard to get a film made, especially an art film with your own final cut. So I thought, “Why don’t I just do it myself, set up a website and get it going.” I decided to get rid of the middlemen, producers and the like. Anyway, they’re all crooks; I never got paid for my movies. The Internet is happening, people make a video and it gets a million hits, so fuck it, let’s do it.

The film took the top prize at the Rome Film Festival–giving “[t]he losers, boozers and casual users of Marfa Girl,” as the Guardian quipped, “a happy ending of sorts.”

But otherwise, such happy endings seem to be few and far between (just like gas stations on the road out to Marfa). The film has received little attention since its online premiere. While the Guardian and the Hollywood Reporter have permitted the film slight reviews, as of this publication, there hasn’t been a peep from the New York Times, Los Angeles Times, or New York magazine, to name just a few venues previously interested in Clark.

Clark was first introduced to Marfa only recently during a film festival of 1970s No Wave films (made in reaction to French New Wave films). Clark had just discovered a silent movie he’d made back in ’68 of the same friends he published in Tulsa, and Clark’s Marfa friend, artist Christopher Wool, invited Clark to show it along with a couple other movies from his repertoire at the Marfa festival. As Clark said in an interview with the Playlist, following his Rome win:

And so the last night I’m showing “Wassup Rockers” but I’m looking at the audience and it’s not a local crowd, it’s like the art crowd. And so I go, “What the fuck, there should be kids seeing this film.” So I go outside and two skate kids skate by, Adam [who stars as the 16-year-old Mexican-American kid] and this other kid and I said, “Come in here, this film’s about you!” So they came in for a few minutes but they had to leave and go to supper and they came back at the end of the film and asked me for a DVD. So I gave it to them and then I’m looking at this kid Adam and I think, boy there’s some charisma in this kid and so it gave me an idea and I went back to Marfa and I photographed him and I got to know him a bit and then Mary Farley [who is also in the film], who I knew, she left town and offered me [guest house], so I had her house and the chickens were there. So I wrote her in as Adam’s mother, and I wrote the chickens in. So I started writing the film there for about a month and that’s how it started.

Watch the Marfa Girl trailer and decide for yourself whether Clark gets Marfa: 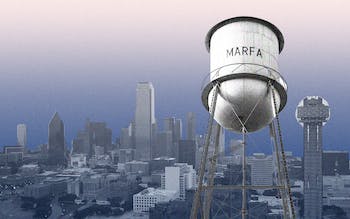 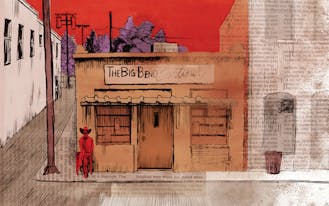 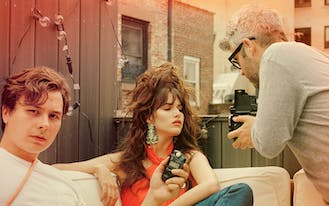