Matthew McConaughey is having a moment. The Longview native ranked in at number 40 on New York‘s Vulture 100, a list of the most valuable stars, because “after years of rom-com purgatory, he’s suddenly interesting again, with five offbeat roles this year.”

When asked at a July 23 screening of Killer Joe about the colorful parts he’s played of late, McConaughey replied, “Yeah, it’s a McConaugh-aissance. I like that phrase. It’s got a good ring to it,” he said at the Tribeca Grand Hotel, according to New York‘s Intelligencer.

McConaughey is set to play Mark Hanna, a mentor figure for DiCaprio’s main character, broker Jordan Belfort. The movie is based on Belfort’s memoir, which describes various addictions and the play-hard philosophy of his early life.

Wolf is just the latest in a line of professional successes for McConaughey, who is more well known for his hard partying and quirky lifestyle than for his dramatic heft. After early promise displayed in his portrayal of a sweaty southern lawyer in A Time to Kill, a John Grisham adaptation, McConaughey fell into something of a romantic comedy rut, appearing in films including How to Lose a Guy in Ten Days, Failure to Launch, and The Wedding Planner.

In 2011, McConaughey took on the lead role in The Lincoln Lawyer as Mickey Haller, a Southern lawyer reminiscent of his A Time to Kill character Jake Brigance. He received some of the best reviews of his career (“It’s a treat watching his Haller slither through backroom deals and elevator-ride negotiations,” Newsday said), and just like that, the actor’s career seems to have been reborn.

This year, he’s earned critical plaudits for his closeted reporter in the upcoming Paperboy (The Hollywood Reporter: he “seem[s] stimulated to be playing such [a] flawed character”), for his larger-than-life district attorney in Austin director Richard Linklater’s Bernie (The Washington Post: he “does a struttin’, drawlin’ good job”), and for his menacing murderer in the festival favorite Killer Joe (The Los Angeles Times: “Never has the actor’s molasses drawl been more lethal”). He even earned Oscar buzz for his role as slimy strip club owner Dallas Austin in Steven Soderbergh’s Magic Mike.

Wolf looks to continue McConaughey’s trend of working with top-flight directors in prestigious projects—a trend that doesn’t look to be wrapping up any time soon. Next up is Mud, a Jeff Nichols film co-starring Reese Witherspoon, followed by Dallas Buyer’s Club about a man with AIDS. At this rate, McConaughey will soon shed his mid-2000s image as being a mere surfer man-boy and complete his metamorphsis into a critical darling. 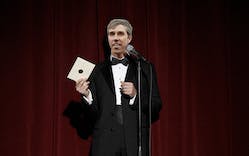 Should Beto O’Rourke Host the Oscars?