WHAT: A spooky new web series in which Megan Thee Stallion plays a private detective investigating a series of murders in “Stallion County.”

WHO: Megan Thee Stallion versus a bunch of vampires

WHY IT’S SO GREAT: Hottieween is Megan Thee Stallion’s acting debut, and proves that she’s no one-trick pony. In addition to rapping, getting good grades at Texas Southern University, and owning summer, Hot Girl Meg could be Generation Z’s Pam Grier.

Hottieween, which draws as much from ’80s horror movies as it does from ’70s Blaxploitation films, was dreamed up by Megan herself, directed by Teyana Taylor, and produced in partnership with YouTube Music. The first episode, “Love Bites,” hit the internet on October 29 (the second episode, “Suck a Neck,” dropped last night, and the final episode will premiere tonight in time for Halloween). The series has all the familiar identifiers of a Megan Thee Stallion project: there is cursing, zero f*cks are given, and it’s also funny as hell. It also features action sequences in which our protagonist quite literally kicks ass.

“Love Bites” drops us right into the action: murder most foul. The victim? A young woman walking home from the club. The perpetrators? A group of men (“fuccbois,” as the show calls them) with glowing eyes, sharp fangs, smooth talk, and no intention to call you the next day. Our hero? Megan Thee Stallion, private investigator. While out at the club, she receives a text from her trusted sidekick Janine (played by comedian Jay Cole) that says: “Murder Bitch! Let’s Talk.”

Megan clashes with local cops (one patrolman calls her a “third-rate wannabe PI”) and is drawn to a mysterious witness named Archimedes (played by rapper Dave East). He wears a black leather duster and sweet-talks Megan back to her apartment, suspiciously like a fuccboi would do. But despite her better judgment, she seems to fall under his spell. Can our hero solve the mystery and protect Stallion County’s other Hot Girls from menacing fuccbois? Or will she become a victim herself?

Considering it’s Megan, the latter seems highly unlikely. But we’ll have to wait until the series finale drops tonight to find out. 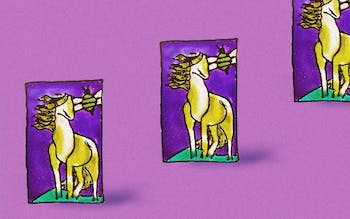