Noël Wells isn’t really homesick for her native Texas. But she agrees to meet me at Los Angeles’s mecca for Texans who want a taste of home—HomeState, the breakfast taco haven in the city’s hip Los Feliz neighborhood—to talk about her latest project. Her debut album, It’s So Nice!, was released in August, and the multi-hyphenate artist is preparing for a run of East and West Coast tour dates, opening for British artist Sam Fender, to support it starting this weekend. But none of those dates will be in Texas.

“Texas and I, we rub,” she confesses over chips and queso. “I get attacked by bugs, I get allergies. It’s a complicated thing. I don’t know why Texas doesn’t like me.” Wells answers questions like she’s talking to a friend, or maybe a therapist. When I ask her if she’s excited about the record coming out, for instance, she’s disarmingly honest. “I don’t know,” she admits. “My problem is maybe that I don’t know how to enjoy it. It feels like there was a moment last year, when I was trying to finish the album, where there was a lot more energy, and it felt more celebratory—and then it just got bogged down with stuff that shouldn’t get in the way of art.” Wells laughs. “Can I say that? I don’t want this to be a bummer of an interview.”

If you ask her friends, though, that’s just how Wells is—someone who is more or less allergic to bullshit. Austin-based musician Molly Burch, whom Wells befriended via Instagram, says that Wells’s directness is part of what helped them form a close friendship quickly. “She’s such an open book,” Burch says. “I immediately felt really comfortable talking with her, and opening up myself, because she’s so open.”

After they met, Wells went on to direct a music video for Burch. That experience introduced Wells to another part of her personality, one that friends say is integral to who she is—that of a collaborator. Flint Wainess, who created a television pilot with Wells for Comedy Central called Power Couple (which didn’t go to series), suggests this is just part of the Noël Wells experience—the openness is what fuels the creative process. “Noël is the most deeply creative person I have ever known,” he says. “I have lanes of creativity, where she is just creative in her soul. Noël has a ton of great ideas, and they’re usually borne out of some deeply lived experience that she needs to express.”

It’s not a surprise to people who know her that Wells is exploring music—she’s the sort of person whose career pursuits are driven by her creative ambitions, rather than vice versa. And she’s tasted success in a variety of media: she was on Netflix’s Master of None, and wrote and directed a feature film that premiered at SXSW (2017’s Mr. Roosevelt), before transitioning to music. Even if she’s not a household name, she’s a working actor/writer/director/musician, none of which are easy things to become. And if the It’s So Nice! release fills her with a little more ambivalence than you’d expect someone in her position to admit to, the fact that the album exists is a triumph for someone who barely played guitar until a few years ago. Now, Noël Wells is trying to figure out if chasing all of her dreams can actually make her happy. 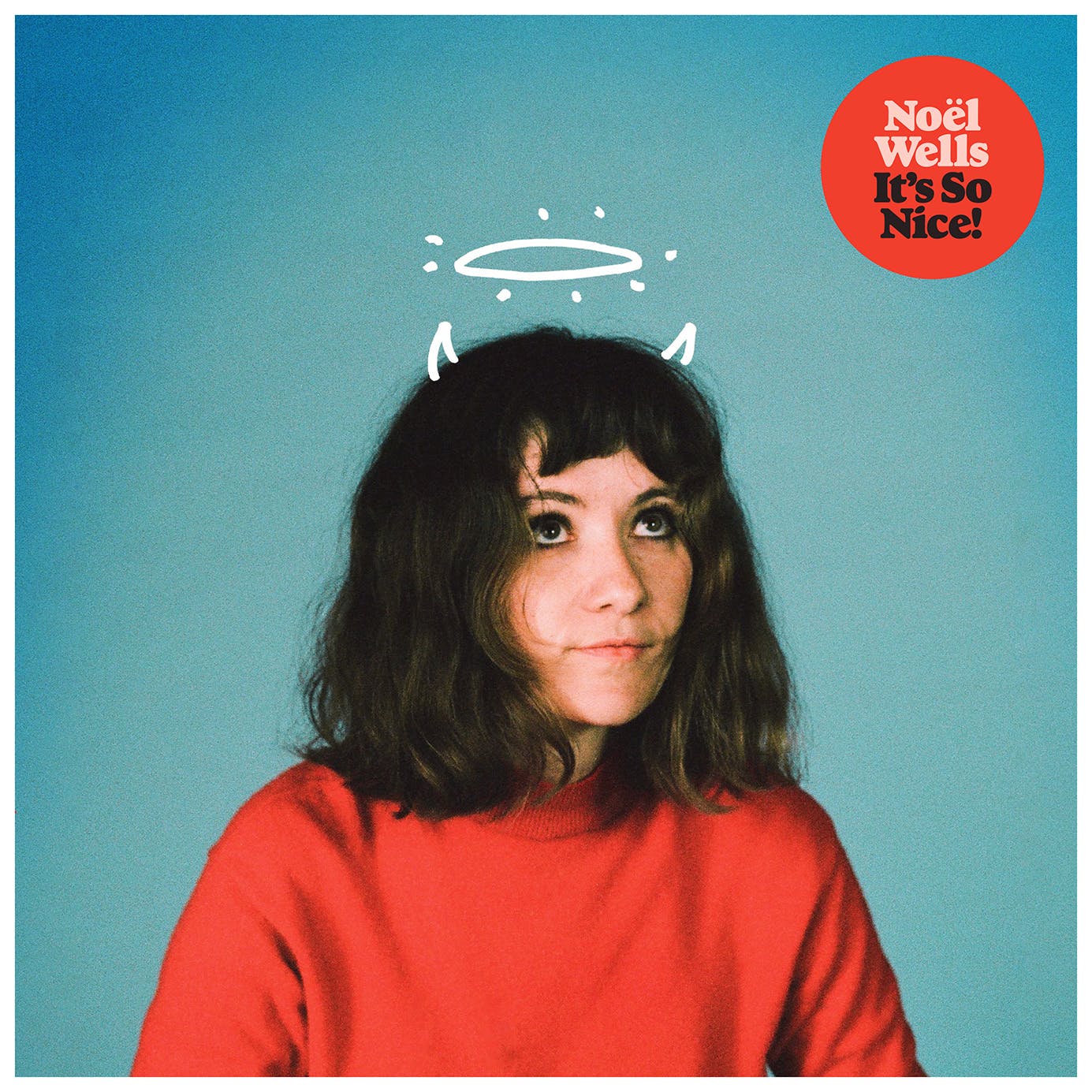 In some ways, Noël Wells’s story is a tale about a person whose dreams all came true quickly. The San Antonio native bounced around Texas—she went to high school in Victoria, then attended the University of Texas at Austin—before heading off to Los Angeles to pursue acting and sketch comedy. “I was not looking forward to moving to L.A.,” Wells says. “I just moved here because I thought that’s what you had to do to be an actress.”

After a few years there performing with the legendary Upright Citizens Brigade improv theater and making digital shorts for websites like Funny or Die and College Humor, Wells got her first break in 2013. She scored every comedian’s dream when she was cast on the 39th season of Saturday Night Live—but it was short-lived, and she wasn’t brought back for the following season. Wells went back to L.A. after that, seeking the next big break.

That happened several years later, when she was cast as the romantic co-lead on Netflix’s Master of None, opposite Aziz Ansari. Following Master of None, things ticked up a bit—Wells appeared in a handful of independent and Netflix original films over the next few years, and wrote and directed the semi-autobiographical, Austin-set flick Mr. Roosevelt.

Around the same time, though, Wells found herself looking for another creative outlet. Her world—and the world around her—was getting harder to talk with people about. She found herself gravitating to the guitar she hadn’t played since her high school pop-punk band broke up when she was a teenager. “2016 was a weird year for America, and I felt a lot of it coming,” Wells says. “I’m a hyper-sensitive person, and I felt a lot of it before other people were picking up on it. I was like, ‘This isn’t a joke, Trump is going to happen.’ The #MeToo movement started, I directed a movie, I went through a breakup—I wouldn’t say I’m unique in that, but that was the year that I had a lot I was trying to communicate, and just talking to people wasn’t working.”

Once she started writing songs, Wells found it was much easier to communicate through that medium. Despite barely knowing how to play guitar, she took to it with dedication, learning new chords from musician friends and teaching herself enough to realize the sounds in her head. She immediately had a vision for what the album could sound like—David Jones, a longtime friend of Wells’s who produced much of It’s So Nice! in his studio in Austin, recalls her testing various tambourines to find one that had the sound she was looking for—and eventually turned out a collection of contemplative, melancholy pop songs, a little bit Lana Del Rey and a little bit Laurel Canyon. While there’s a dry wit to songs like “Sad Girl Blues” and “Burn It All Down,” the album is decidedly not a comedy record. “I didn’t know this album was coming,” she says, “But I’m not surprised. I was working to find this voice.”

Getting that voice right in the studio was a challenge at times, though. “The main thing I learned in this process, which will be an ongoing thing in my life, was figuring out ways to stand up for my stuff. That’s something I struggle with—I know it’s mine, but other people don’t seem to know that.” When I ask Wells what she means, she hesitates. “People get possessive over things,” she says, offering: “It’s a woman thing. The record was dealing with a lot of the themes I ended up facing while I was making the album.” She’s talking about songs like “Sad Girl Blues,” where she sings about how “I’ve said I’m sorry for the last time” and “I want to take what’s mine.” She says she felt downright incredulous that some of the people in the studio with her didn’t get that the song was about “being a girl trapped on a boys’ playground,” as she put it in a track-by-track breakdown of the album. “It was like, ‘Guys, really? We’re doing these songs, listen to what I’m saying in the music! What are you doing?’”

Wells’s other big revelation in the process of making It’s So Nice! was that everything she does—the music, the movies, the comedy, name it—is really just the way she’s trying to build a community for herself. When I ask her if she’s proud of the DIY approach she’s taken to a lot of her career—Mr. Roosevelt was an independent film, and she released It’s So Nice! without the support of a record label—she says, “It’s isolating. It’s the opposite of why I’m doing it.”

Los Angeles can be a lonely place, but Wells never really felt all that at home in Texas, either—and she doesn’t think of her experience of feeling isolated as an L.A. thing. It’s just part of being her. “I’m trying to connect with people, I’m trying to find community, I’m trying to take my talents and belong. So to be alone, pushing my rock up a hill, it makes you wonder why you’re doing it,” she says. Even when the project is out there and other people can connect to her songs or the story she tells in a movie, it still feels lonely to her.

Wells has a vision for how all of her pursuits might interconnect with each other until she’s able to get where she wants. It goes like this: her acting career put her in a position where she could put a record out, and now the album might tell people who only think of her as an actress or a comedian that she’s someone who can see through any kind of project. “I want people to know that I’m formidable. If you put me in, I will deliver,” she says. “I’m not cute, I’m not a joke. I want to go deeper. I want other people to be with me, too.”

So far, the place she’s found that lets her be all of that is music. Even doing live comedy, she says she felt like a fake—it was always a character—but playing the songs in front of people is like a direct way to connect with an entire room full of people. “I feel so powerful when I play these songs live. I have a guitar—it’s like a weapon. When I’m playing music live, I feel as cool as I wish I was [all the time],” she says.

Wells is writing more songs now, but she’s not in a hurry to do anything with them. She’s got a new screenplay she’s excited about—when I ask her what she can tell me about it, she’ll only say that, unlike Mr. Roosevelt, it’s not set in or about Texas—and she’s doing some voice acting, including a lead role in CBS All Access’s forthcoming Star Trek: Lower Decks animated series. All of those things might culminate in the exact sort of outcome Wells dreamt of. And if that happens, it’ll be in part because she was able to pick up her guitar at thirty years old, take it seriously, and learn to communicate things she couldn’t say any other way.

“I don’t know how to bullshit. That’s not who I am,” she says. “But I’m in a good place. I feel more together and self-realized than ever. I’ve struggled with anxiety for a really long time, and I’ve really gotten a handle on that, which makes me more capable of doing everything I want to do. And music directly helped me with that. It helps me process emotions I couldn’t access before. Knowing how to play these songs, I walk into a room with Big Dick Energy all of a sudden. I really do believe that music changed my life.”