Famous Texans are always making headlines. For the latest scoop on our home-grown celebs, we bring you Own Stars, a TM Daily Post regular feature.

Eva Longoria Says, Dream On, Mitt
The battle over immigration could come down to the influence of Eva Longoria, the Desperate Housewives actress and former wife of Tony Parker, the San Antonio Spurs point guard.

Longoria, a Corpus Christi native, called out Mitt Romney on Twitter for not supporting the DREAM Act, the Huffington Post wrote. The Dream Act, if passed, would grant permanent residence to people who came to the U.S. illegally but have contributed to society, whether by seeking an education or enlisting in the military.

The irony here, of course, is that Romney is a Mexican by way of his father, who was born in Chihuahua, Mexico.

Longoria’s tweet didn’t have much effect on the Florida Republican Primary, where Romney garnered overwhelming support from the Latino community.

But Longoria is just getting started. Zachary Roth of Yahoo’s The Ticket reported that Longoria has raised $200,000 for President Obama, with the hope that if he is reelected, she can make good on the immigration brainstorming sessions she has had with him.

Glenn Beck Puts God Back in Ben Breedlove’s Videos
“This is one of the most powerful God messages I have ever seen,” Glenn Beck, the talking head who recently moved to the Dallas area, said on GBTV. He was talking about the haunting yet inspiring YouTube videos that Ben Breedlove, the Austin high-schooler who had long suffered from heart problems, posted before his death on Christmas Day.

As Beck mentioned, the national media has glommed onto the videos, which he said have been viewed more than ten million times, but, as Daily Rushbo points out, God was missing from the NBC broadcast.

Love or hate Beck, you have to give him credit for airing the videos in their entirety—even if it is only Internet TV, and even if he dressed the part of a Mennonite preacher to deliver them. “When you see this video, try to cut God out of this video,” Beck said. “This story is all about God, and angels.”

Richard Garriott Spaces Out on the Big Screen
Richard Garriott, the eccentric Austin video-game maker known as “Lord British,” has made Newt Gingrich’s plan for a space colony on the moon look pedestrian, with the release of Man On A Mission: Richard Garriott’s Road to the Stars, a documentary film about his $30 million trip to space.

In an expansive Q & A with Alex Pasternack of Motherboard that touches on the sad state of bathroom facilities aboard space ships, Garriott is asked about his plans for future trips out of this world:

It may or may not be able to occur within my adventuring lifetime, but if it were, I’d be one of the first people headed over to Mars. I’d take a one-way trip to Mars to help settle a new planet.

Matthew Odam of the Austin American-Statesman traces Garriott’s movie back to the Austin wedding where it was conceived. “[Richard] had me at ‘centrifuge,'” said the documentary’s director Mike Woolf, who in a previous life worked at the Austin ad agency GSD&M, where he coined the tagline “Wanna Get Away?” for Southwest Airlines.

Meanwhile, Matt Blum of Wired has the scoop on Apogee of Fear, Garriott’s movie within a movie that was so raw, NASA almost didn’t want you to see it.

Would You Pay $45 Million For This Austin Ranch? 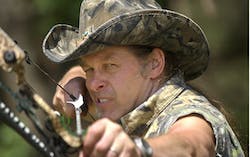