Remember Phil Collins’s obsession with the Alamo? Of course you do.

The former Genesis drummer-turned-frontman’s passion for the history of Texas’s most revered site was the subject of John Spong’s January, 2012 Texas Monthly story, “Come and Take a Look at Me Now.” That was followed by Collins’s own book, The Alamo and Beyond: A Collector’s Journey, which had one academic calling the man behind “Sussudio” a “poet-historian.”

Now, Ben Powell, the photographer who shot Collins’s collection of Alamo artifacts for that coffee-table tome, aspires to make a documentary film about the Englishman in Texas, Phil Collins and the Wild Frontier.

Powell tagged along with Collins on his book tour, camera in hand, and found “an overwhelming response from fans and Alamo enthusiasts, which led to strange interactions with Mr. Collins and myself,” he wrote for the film’s Kickstarter, which aims to raise $10,000. You can watch Powell’s trailer for the film, above.

Among the usual expected prizes (name in credits, DVD) are, for a $100 pledge, some prints of the photographer’s work for Collins’s book: 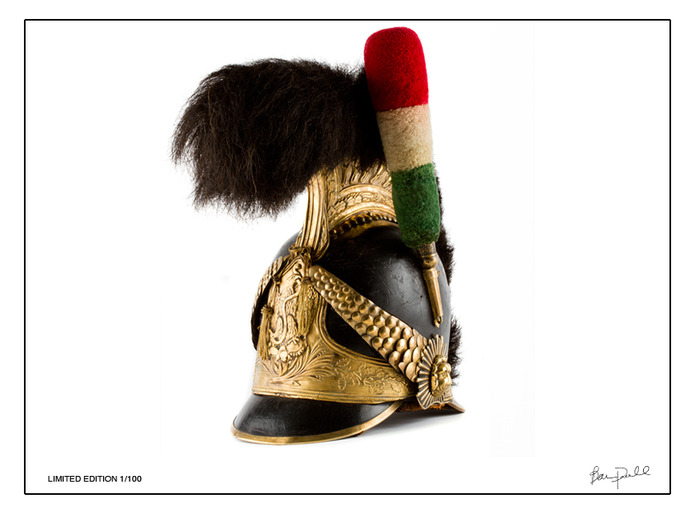 Phil Collins and the Wild Frontier follows Mr. Collins on a 5-day tour as he answers questions about his obscure collection and his retirement from music. By observing the impact his music career has on his life and the more painful realities of being a celebrity, what unfolds is an examination of mankind’s obsession with artifacts.  Mr. Collins, a man absorbed in a collection of objects from a bygone era, is himself a relic of 80’s pop culture and objectified by his stardom.

That’s part of what John Spong found in his Texas Monthly piece as well. Collins’s heightened interest in The Alamo dovetailed with the fact that he could no longer physically play the drums, and he also suffered through a lot of unwanted mocking attention when it was reported that he may have taken seriously a psychic’s suggestion that he was the reincarnation of former San Antonio mayor John W. Smith.

He sounded like a college professor, the kind who never lectures to empty seats, authoritatively examining various accounts, buying some and dismissing others, and giving frequent personal asides that showed how much the history meant to him and how long he’d been thinking about it. He described the museumlike display in the basement of his home in Switzerland, which is believed to contain the world’s largest private collection of artifacts and documents from the Texas Revolution. He talked about his book, The Alamo and Beyond, scheduled to be published in March. It’s a coffee-table edition with photos and essays he’s written about each of the two hundred items in the collection. And he traced his fascination back to being a little kid playing Alamo with toy soldiers in his garden in England. “I didn’t have an official set, didn’t even know if one existed. I just made these soldiers the Texans and these the Mexicans. I’d tried to buy Dimitri Tiomkin’s fantastic sound track to John Wayne’s The Alamo, but I couldn’t get that either. So I used the ‘William Tell Overture.’

“And this is kind of interesting,” he added, turning from the window. “After the battle, I’d set fire to the Texans, which is what they did here. Now, I did not know that is what happened. It wasn’t in any of the films I’d seen. The more I think of that, the stranger it is, and the more it ties in with the idea that I may have been here.”

Powell’s film is not the only Alamo artifact movie in the works. As Scott Huddleston of the San Antonio Express-News wrote last month, when the famed Travis “Victory or Death” letter returns to be displayed in February, filmmaker and Alamo buff Gary Foreman plans to shoot a documentary about it for the Texas General Land Office, which will make it available to 4th and 7th grade Texas history classes. Foreman and the Land Office, which is the Alamo’s custodian, hope to obtain funding from PBS or cable television.