Boyhood, the film shot over 12 years with the same actors, which opened recently in Texas, begins in what the director, Richard Linklater, describes as a “mythical little childhood home that you dream about the rest of your life.”

The location of the house is deliberately kept ambiguous in a film that otherwise takes care to be very specific about where scenes unfold. Boyhood is indeed a love letter to Texas. Linklater, 53, who never left the state while growing up, set memorable moments in the childhood of Mason Jr. (played by Ellar Coltrane) in Houston, San Marcos, Austin, Bastrop, Big Bend Ranch State Park and Pedernales Falls State Park.

The locations influenced the story of Boyhood as much as the actors, who age along with their characters. To keep the film within its very small budget, various locations near Linklater’s base in Austin were made to resemble other parts of Texas. “We couldn’t really afford a trip and all that time to go to actual locations, but it’s the magic of cinema,” Linklater said. “You piece this thing together — it’s all storytelling, and what the audience feels.”

But some things — like a professional baseball game in Houston, or a particularly rainy week at Pedernales Falls — could not be faked. The day before the film’s wide release, Linklater explained how the locations in Boyhood shaped what he calls “my ultimate Texas movie.”

The bowling alley that Ethan Hawke’s character, Mason Sr., frequents with his children, Mason Jr. and Samantha (played by Linklater’s daughter Lorelei Linklater) is fashioned after one that Linklater remembers from his own boyhood in Houston.

“That bowling alley would be like the one on Main Street,” he said. “But in real life, we’re filming a lot of that at Dart Bowl in Austin. We put up a Houston Texans poster on the wall that we ultimately didn’t get the rights to. We had to change it.”

There was no replacement for Minute Maid Park, however. When the film called for Mason Sr. to take Mason Jr. and Samantha to an Astros game, Linklater secured permission to film there. Linklater briefed the fans sitting within the camera’s view and then, Linklater said, “We got very lucky. The Astros weren’t known for their offense at that time, but Jason Lane hit a home run right where the camera was pointed. We didn’t have the budget to stage a baseball game — even the biggest budget films struggle with getting a crowd — so we had our dialogue worked out and we were ready to make it work.”

When Mason Jr.’s mother, Olivia (Patricia Arquette), takes a job at a university, the family moves to San Marcos. The small Central Texas college town, one of the fastest-growing cities in America, is not often seen on the silver screen.

“My nephew goes to school there, and I’ve been going there my whole life, for different reasons,” Linklater said. “It’s a fun little college town, and it’s a place where she would get a job: They’re hiring. It’s expanding.”

It is a dynamic locale because, despite its growth, the city, “still has a small town feel,” Linklater said. “A little girl who talks to Mason Jr., her mom owns a shop on the town square. It’s like a one-high school town.”

Boyhood would not be a true depiction of Texas if it did not spend some time at a ranch. As Mason Sr. remarries, new grandparents suddenly enter the family — and they are the sort of folks who live on a ranch in East Texas. Linklater found a substitute just 45 minutes east of Austin: Lost Pines.

Much of the film was shot in Austin, but the only substantive scene there comes when Mason Jr. visits his sister. Mason Jr. and his girlfriend, Sheena (Zoe Graham) stay up all night eating queso in 24-hour diners, meeting some of the city’s infamous weirdos, and, of course, seeing live music. The Continental Club owner, Steve Wertheimer “is a friend,” Linklater said. “We shot there for ‘Slacker’ back in 1989, so he’s like, ‘Well, sure, you can shoot here.’ We go in there early in the day and shoot in the afternoon when there’s no one there, and create the show.”

Linklater’s memories of the Continental Club predate “Slacker” — and recreating them on film is what Boyhood does best. “I had older friends that went to college at U.T., and I remember as a high school kid, I ended up seeing music at the Continental Club. I was like, ‘Wow, I like it here. There’s live music and cool people. I could see myself here.’ I stayed out all night and I walked around.”

Linklater stayed, in fact, for good: He founded the Austin Film Society in 1985; released “Slacker,” which was his first commercially successful film, in 1991; and opened a 20-acre film studio called Austin Studios in 2000. The 12 years that he spent filming Boyhood capture a hectic time in Austin’s history — the city’s population and cost-of-living spiked — but Linklater does not think Mason Jr.’s first impression of the capital would differ much from his own. “There’s still that same kind of cultural experience to be had. That’s going to happen in Austin for a certain kind of person in the same way it always has,” he said. 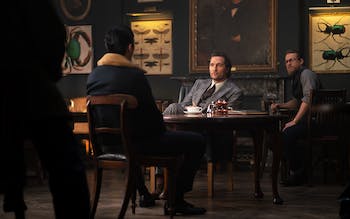