Monday night, the Rockets got their shots. They played their game. And it cost them a trip to the NBA finals when the Golden State Warriors bested them 101–92.

The stat plaguing Houston after the game seven loss is 0 for 27. That’s the number of three-pointers the Rockets missed in a row, including an 0–14 three-point shooting performance in the third quarter that erased their eleven-point halftime lead. They went 7–44 in total from beyond the arc (making only one the entire second half), easily their worst shooting performance of the season. Before game seven’s 15.9 percent effort, the Rockets hadn’t shot worse than 20 percent on threes all season.

It wasn’t like the Warriors were playing suffocating defense. The Rockets had open looks, but their shooting just went ice cold. When reporters asked Rockets coach Mike D’Antoni if his team should have given up on threes, he said, “No, that’s what you do. That’s where the game’s going. No, now we should have made some more, but no, I don’t lose confidence in that. No, we’ve got the right formula.”

When they asked Harden whether there was any point when he thought the team should change strategy, he said, “No. There wasn’t.”

This is who the Rockets are. They were custom built to beat the Warriors by surrounding all-time great scorer James Harden with athletic teammates who could shoot threes and play clampdown defense. Even with Chris Paul out due to an injury, it took a historically bad shooting performance for them to lose game seven. No team has ever missed 27 three-pointers consecutively in a playoff game, according to Elias Sports Bureau, and it’s unclear whether or not any team has ever missed that many in a regular game. It’s hard to believe that anybody could have. According to FiveThirtyEight, the chances of the Rockets missing 27 threes in a row were 1 in 70,000.

Of course, it wasn’t only game seven that cost the Rockets a finals berth. There were the other three losses too. This series was, like the playoffs tend to be, predicated on streaks. The Warriors had theirs, and the Rockets responded until they couldn’t. Houston went into Oakland and won, something no team has done in the playoffs since 2016. Losing Paul was a devastating blow, and fans will play the “what if” game for years to come, but looking back, it never feels like Houston was overmatched, even with the point god on the bench. We already know that the Warriors are one of the best teams of all time, so it’s understandable that the series went seven. Of course it went to seven, because these teams were that evenly matched. What was shocking was that the Rockets seemed to be in total control for the first half of game seven and then lost it completely. Maybe it was nerves, maybe it was exhaustion, but it wasn’t for a lack of talent. It feels today like the Warriors stole the series. It’s hard to imagine we would have been saying that following game one’s thirteen-point loss.

And still, in spite of a historically poor effort in game seven, the Rockets only lost by nine. If they had made only three more three-pointers, they would have tied it. A 10–44 performance would have still been the Rockets’ second-worst shooting night of the season, and it would have been enough. For the Rockets to lose game seven and miss the finals, everything had to go wrong.

More than any single player (yes, even more than Harden), the Rockets are defined by their style of play. They’ve been called an experiment by many, and even after the loss, it should still be considered a success. This is a team and style of basketball that can win a title. After frustrating stops with the Lakers and the Knicks, Mike D’Antoni was almost out of basketball for good when GM Daryl Morey approached him to take over the Rockets. In Morey, D’Antoni found someone who holds many of the same beliefs about basketball that he does, including the fundamental fact that a three-pointer is worth 1.5 times as much as a two-pointer but is not 1.5 times harder to make. The coach decided to test his theory one more time, and in Harden, D’Antoni found a star that fit his system perfectly and bought in wholeheartedly. It’s every coach’s dream to see their ideal system realized, with a team full of players who are executing their whiteboard vision. In game seven, as the threes kept rattling out, the Rockets never stopped. They missed 10 in a row and kept shooting, then 20, then 25, and still they didn’t hesitate. There’s something to be said for that, and as the focus shifts towards next year, most of the heavy lifting is already done. The Rockets found their system, and they all buy in.

Now comes the evaluation that follows every season, the taking stock of what happened and plotting of the best path forward. Paul and Clint Capela are free agents, and it’s hard to believe that Morey will let either player walk. And then there is the question of LeBron. The Rockets are reportedly one of the teams the King is considering this offseason, and a team featuring Harden, Paul, and James would be the prohibitive title favorites. With salary cap restrictions, it would be tricky to pull off, but it’s doable. Besides, if anybody can figure it out, it’s Morey.

Whatever next year’s team looks like, game seven won’t define them. It certainly won’t dissuade Morey, D’Antoni, or Harden of the bedrock of Rockets basketball. Three-pointers can send you to the championship. All you have to do is make them. 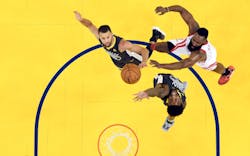 Can the Rockets Repeat Game Four? 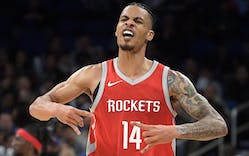