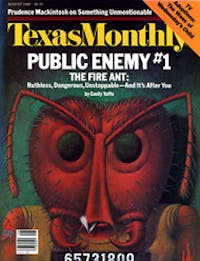 Most Texans have a favorite small town. Mine is Salado, a community set among oaks andlimestone springs 45 miles north of Austin off Interstate 35—”About a quarter of a milefrom Resume Speed,” we always said.

When I was born in Salado in 1920, some 200 people lived there. Today it is home to 1,500. As a child, I would sit on the upstairs gallery of my grandparents’ house andlisten to the cars on the distant highway heading south to Austin or north to Waco, and Iyearned to grow up and find out what was going on out in the world beyond. Now in thehappy hour of life, I seek the springs of Salado, searching for reasons to return for aweekend or a Sunday afternoon. It’s the place where I sort out the world’s complexities.Salado has always been so laidback that when its charter for incorporation ran outaround the turn of the century, no one bothered to renew it. The community has no mayoror constable. There are two fire trucks with volunteer firemen, and the fire chief is also theMethodist preacher. The Bell County sheriff is on call for the infrequent crime. A looselyknit chamber of commerce is Salado’s only governing body, and the chamber’s onlysource of revenue is the annual art fair. Some residents think Salado could be better servedby a real city government. That’s bound to come, but in its own time.

Meanwhile, Salado just keeps rolling along. People from out of town probably know it best because of the Stagecoach Inn which—with its hush puppies and strawberry kisses—has been a tradition with travelers for years. Not as widely known but a localfavorite, the handsome old Tyler House makes the best chicken salad in the state. GraceJones of Salado owns Texas’ most unexpected fashion venue, with the season’s high stylefrom Milan, Paris, and New York. She has Texas premieres for the collections of somedesigners, and her customers fly in from all over the state. For recreation, there is golfingand swimming and tubing in Salado Creek’s deepest hole, by the Stagecoach Inn. In thetiny downtown are antique shops, some—like Thomas Wilkes’s—with eighteenth-century English country pieces.

But the single thing that makes Salado different from the other 562 towns in Texas with fewer than 1,500 people is that from the beginning it has had a love affair with learning. It began when Colonel E. Sterling C. Robertson, my great-grandfather, set theintellectual tone of the area when he arrived in 1853, built his home, founded the town, andstarted the college, and the affair continues today with a remarkable grass-roots think tank,the Institute for the Humanities at Salado. In between, Salado has had more than its shareof scholars and ordinary citizens who cared about the mind.

As a boy, great-grandfather Robertson had fallen in love with the streams, trees, and rolling limestone hills when he rode through the area with his father, the impresario and colonizer Sterling Clack Robertson. Later the young man wrote of the country as”abounding with immense herds of deer, turkey, buffalo, antelopes, bear, wild horses andas an undulating prairie country covered with the famous mesquite grass, green the yearround and equal, if not superior in nutritious qualities to the blue grass of Kentucky. Every hollow tree has wild honey.”

Our family preserves the story that he staked his claim by riding all night from Austin to beat two other men to the area. He ended up owning most of the land for miles around Salado’s bountiful springs, and there he built the family home, bringing cypresslogs by ox-drawn wagon from Huntsville, a two- or three-day journey.With six daughters and six sons, Robertson naturally made education a priority. Heorganized a small nearby settlement, setting aside one hundred acres for lots, a church,schools, and Salado College. There a classical education—including six years of Latin—wastaught. Later, as a member of the Constitutional Convention of 1875, he helped write thearticle providing free public schools.

The value of education and inquiry into public issues is a continuing thread in the135 years of Salado’s history. The first literary club in Texas—the Amasavourian, meaningthe “Love of Learning” Society—was organized here at the request of three femaleschoolteachers and held in the evenings so the women of the town could attend. The firstGrange in Texas, a chapter of a national agrarian organization dedicated to bettering thelives of farm families, particularly in the area of education, was organized in Salado in1873. One of its outstanding leaders was A.J. Rose, who spread the movement over Texasso effectively that the order reached 1,275 lodges with 40,000 members in Texas and theIndian Territory by 1876. Rose also established himself in Salado as a crusader for betterschools, better teachers, and free textbooks, later becoming the chairman of the board ofregents of Texas A&M University.

In 1875, my great aunt Luella, then a brilliant eighteen-year-old, stood on SaladoHill by the new college and made a speech with the commanding title “The MentalCapabilities of Woman and a Plea for Her Higher Education.” She said to the collegealumni and handful of townspeople, “A young lady’s mind should be garnered so wellwith seed for future usefulness, that even in the desert of life, she can find enjoyment andcompanionship in her books, her truest friends.… No inferiority on account of sex isobserved in childhood.… That [woman] shall not be educated in common with man is adisgrace to the age in which we live.” This must have been a moment of surprising oratoryfor a young woman in 1875, but it expresses the city’s abiding commitment to knowledge.

Many of our local leaders were writers. George Tyler, who served in the Legislature, wrote The History of Bell County. Earlier settler Joshua Fowler wrote the textbook Fowler’s Arithmetic in 1872. Charles Ramsdell, a distinguished historian at the University of Texas, grew up in Salado. And my great-aunt Birdie Robertson Johnson helped found the Texas Federation of Women’s Clubs, which pushed for better libraries, consumer information, good nutrition, and female suffrage long before they became mainstream interests. And no roster of local dignitaries would be complete without a mention of Mrs. Jim Guthrie, the wife of the town pharmacist, who took the New York Times in the twenties and saved the issues for everyone to read. But the crowningachievement in this small town’s continual thirst for knowledge is the Institute for theHumanities at Salado, a group that brings some of the great talents of our time to share theirthinking with us. Psychiatrist M. Scott Peck, poet Maya Angelou, chemist Ilya Prigogine,scientist Linus Pauling, and author Isaac Bashevis Singer have all been our guests. Here,they encounter an audience of interested and curious Texans from Austin, Dallas, Houston,and San Antonio who come not to make social points but to listen and to learn.

Scheduled for 1989 are two seminars in the ongoing series “The Human Spirit”—”spirit” being defined as “what motivates and inspires people to live wisely, to create, to survive, and to rise above the mundane, materialistic, technologic civilization.” The spring semester, focusing on literature, will present a deliberately odd couple, Nien Cheng of Washington, D.C., the author of Life and Death in Shanghai, and Elaine Pagels, the author of The Gnostic Gospels and Adam, Eve, and the Serpent. When autumn comes, another topic, “The Healing Spirit and Religion” will bring theologians and psychiatrists to Central Texas. What makes all this possible? The founder and moving force is kindly, soft-spoken Harry Wilmer, a Jungian analyst whose goals are so high and who is so well respected that he can bring experts from Zurich and Bern and London to Salado. There is a long waiting list for membership in the institute, and the gatherings are limited to the capacity of the room at Mill Creek Inn, about 160 at most. Lectures—held in the spring and the fall—last acouple of hours, with good talk afterward around the dinner table. Symposia—held every three years—last three days.

What makes the Salado institute different from most is precisely that it is not elitist or academic. The honorarium is modest; Wilmer says he attracts international thinkers because the institute is composed of people “who are less living in their head and moredown to earth.” The lecturers come because they are charmed by that ingredient.I have known small towns where evil surfaces because one or two individuals aremean-spirited, towns that dishearten their young people because a school superintendent isunimaginative or because a preacher lays guilt on everyone each Sunday. I have been intowns where everything becomes a wisecracking joke and towns where you can smellbigotry around the courthouse. But if a few individuals can poison a town, there are alsothose who can purify its spirit with their individual values. Salado is evidence that in eventhe smallest unit, the spirit can live. In a small space, a few individuals can make a stand for good.