From his office in the southwest corner of the eighth floor of the Cactus Hotel, Addison Lee Pfluger can see much of San Angelo. The Cactus, a sandstone-colored brick building constructed by Conrad Hilton in the late twenties in the style of the Italian Renaissance, is being restored by Pfluger at no small expense. At fourteen stories, it’s the tallest building in San Angelo.

Pfluger is a businessman, but one who says his primary goal is “to improve the quality of life for others.” His family is one of San Angelo’s most prominent, and he is generally regarded as the city’s leading citizen. He has financial interests in ranches and oil and gas concerns in the area and stakes in commercial property as far afield as Dallas. He’s a patron of the arts and a supporter of local causes. Over the past two decades, he’s been a pivotal part of the forces that have helped rejuvenate San Angelo’s once ghostly downtown. As we speak on a recent afternoon, a member of the East Angelo Lions Club stops by, seeking a donation for an upcoming fundraiser. He receives a crisp $100 bill for his efforts.

So last summer, when Pfluger approached the city’s planning authority to discuss the possibility of building a transloading facility for fracking sand on a ten-acre lot he partly owns near the middle of town, he thought of it as yet another savvy business move that would bring jobs and money to San Angelo. The fine-ground silica he intended to import was in high demand in West Texas. Injected underground, the sand is critical to the fracking process, holding fissures open in rock formations that allow the area’s mineral riches to rise to the surface.

If things went according to plan, trains would deliver large quantities of silica to Pfluger’s depot, where it would be loaded onto trucks—24 a day—and taken to the region’s drilling operations. Pfluger already owned one such facility in northern San Angelo, half a mile away from any major residential areas, but there was still unmet demand. Pfluger figured that his empty lot, adjacent to a busy highway and with easy access to railroad tracks, would be the perfect location for a second facility. Last August the city, in apparent agreement, waved an airy hand of approval.

But Pfluger and San Angelo’s city government didn’t take into account the changing mood in the city. A month after the plan got the go-ahead, Jesse Martinez, a former justice of the peace who lives a few hundred yards from the lot, appeared at a city council meeting to voice grave concerns. “I live in a very modest neighborhood,” Martinez said. “But we’re proud of our neighborhood. We value our homes.”

The lot where Pfluger planned to build his depot sits between Santa Rita, the city’s upscale neighborhood, and Fort Concho, which contains the San Angelo barrio where Martinez lives. Martinez was worried that sand from the facility would settle onto their homes, and great trucks would rumble down their streets like an invading army. If Pfluger was aware of the potential consequences of his actions and chose to disregard them, Martinez declared to the council, and if his plans were “based on, as we believe, greed, then that’s evil. And the love of money, we know, is evil. And so the proposal site, therefore, is evil.”

That was not the sort of language in which municipal politics are usually conducted in San Angelo. But to the surprise of many, over the course of the next several months the opposition gained traction. Santa Rita’s upper class joined hands with the barrio’s poor. Flyers and radio ads materialized and multiplied. T-shirts bearing an image of a sad-looking man’s face wearing a respirator appeared around town. It became a commonly accepted belief that silica dust from the depot would give a lot of San Angeloans cancer, though this is debatable. Pfluger, who prides himself on the work he’s done for his city, was labeled a villain by some; a YouTube video cast him in the role of the avaricious banker Henry Potter from It’s a Wonderful Life.

Finally, in February, after months of efforts to overturn the city’s permission for the depot—Martinez filed an official challenge—Pfluger accepted defeat. He’d build his depot outside city limits, if at all. “It’s just business,” he says. But he remains perplexed about what happened. San Angelo, he says, is the “best city in Texas,” which is, he clarifies, his way of saying that it’s the best city in the world. “It’s a warm, hospitable place. But it’s parochial in many ways. So this thing was able to develop through a lot of social media, from a thought to a fear,” he says. It reminds him, he says, of the panic that spread in Dallas and beyond during last summer’s Ebola crisis.

But beneath the fear of sand and cancer San Angeloans seemed to be experiencing a generalized anxiety wrought by the fracking revolution. San Angelo has long tried to reap the benefits of oil booms while insulating itself from their consequences. H. R. Wardlaw III, a lawyer and Santa Rita resident who provided free legal advice to the anti-depot effort, told the Houston Chronicle, “My family’s been in the oil business continuously for ninety years. I make money off fracking operations, but I don’t want it in the city limits.”

While other West Texas towns find themselves dependent on boom-and-bust cycles, San Angelo has tried to build a diverse economy, a welcoming downtown, and a healthy cultural scene. “We do not want San Angelo to become a one-industry town; it has always been our intent to diversify in everything we do,” says mayor Dwain Morrison.

Still, signs of the oil and gas rush are everywhere. New housing and cheap motels have popped up all over town, though not fast enough to obviate the need for the man camps—temporary lodging slapped together overnight or desolate lots filled with rows and rows of RVs—that shelter the recently arrived oil workers. One man camp sits adjacent to Pfluger’s proposed depot site, next to a new Super 8. Walk around San Angelo’s downtown on a Friday night and you’ll be struck by how young and male the crowds are at the local bars.

Pfluger’s attempt to build his depot in the middle of town seems to have pushed the floating anxiety about San Angelo’s fluctuating nature close enough to the breaking point that people who otherwise had very little in common found themselves working in concert. Local philanthropists Hampton and Bonnie Beesley, who live on the Santa Rita side of the depot, helped raise money for the opposition, but the literature, T-shirts, and other items originated on the barrio side, with Martinez’s house serving as the main center of distribution. Martinez, whose wife was running for his old justice of the peace seat, made the anti-depot campaign an adjunct of hers.

Social media facilitated the spread of anti-depot polemics across wide swaths of the city. Kat Rowoldt, the proprietor of the Christian Reporter News, a local online magazine, played a prominent role in the opposition. (Ironically, Pfluger was an early backer of the publication.) Her videos of the devastation wrought by a sand depot in the small community of Barnhart, fifty miles away, seem to have concentrated the minds of San Angeloans. “These little communities are not incorporated, so there’s no zoning or anything to protect them,” says Rowoldt. “Their homes and everything are literally covered in a blanket of that silica sand.” San Angelo could afford to keep itself at arm’s length, she said, and it should. Pfluger says his facility would have been nothing like Barnhart’s.

For Rowoldt, the opposition’s success in killing the depot was a bright harbinger of San Angelo’s future. “This was a very unique situation. It brought together very rich and very poor people, people from all parts of town, people of different races, philosophies, cultures,” she says. “It showed how our community can come together and accomplish great things.”

Pfluger’s take is a bit more cynical. It was an election season, he says, and spectacle for spectacle’s sake proved too tempting for some San Angeloans. “I was complimented by one of the figures in the opposition, who said, ‘Lee, you sure give us a lot to talk about at the dinner parties,’ ” he says. The proposed depot’s location near a “socially elite” neighborhood was what killed it, he theorizes, not some broad-based grass-roots campaign.

At any rate, the city may soon have to worry less about the oil boom’s civic challenges. Pfluger plans to use his lot for some other kind of industrial facility, meaning the trucks may still be coming—they just won’t be carrying frack sand. One proposal he recently received pays testament to how much things have changed in the oil patch since the depot was approved back in September. There is, as pretty much anyone out here will tell you, an oil bust coming, which presents its own opportunities to a savvy businessman: instead of bringing in raw materials to aid in the fracking boom, Pfluger may end up using his lot to store dormant oil rigs—before they’re disassembled and shipped out of West Texas. 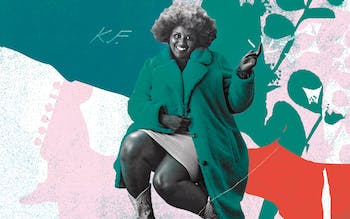