From Sol-Angel and the Hadley St. Dreams, named after the street where Solange and Beyoncé recorded songs as kids, to filming her “Cranes in the Sky” video at Houston’s historic Alley Theatre, Solange has always been an idiosyncratic sound in the black music landscape—and one grounded in her hometown. In her music, Solange speaks to the experiences of a black Southern woman raised in Houston.

In her latest album, When I Get Home (March 1), she expands beyond that: she moves past the black sanctuary of Houston to speak to the experience of being a black woman from rural Texas. Solange gives black country folks, especially women, a space to recognize themselves, by acknowledging our deep cultural traditions outside of a city with black affluence and artistic expression. The album, particularly the visual version, is a testament to the complex pride of being a black Texan.

Much like Solange’s previous work, the album combines genres across generations of black culture: funk, R&B, chopped and screwed, trap, and cosmic jazz. Solange pays homage to black music icons—Stevie Wonder, Sun Ra, and Alice Coltrane—as she pushes her sound forward with the help of her contemporaries, like Tyler, the Creator, Metro Boomin, The-Dream, and Raphael Saadiq.

On her previous album, A Seat at the Table (September 2016), Solange used samples and personal narratives to demand space for black self-worth in the context of racism and inequity. The 21 tracks were ribboned with the modern jazz sound of New Orleans, along with funk, hip-hop, and soul. She interlaced tracks like “F.U.B.U.” and “Mad” with reflections from her parents, Tina Lawson and Matthew Knowles, as well as cultural figures like Master P.

Unlike the resonant conversations of A Seat at the Table, the steady pace of When I Get Home is less about speaking and more about feeling: both the trillness of Houston and the convoluted calmness of the country.

The pace of the music forces the listener to slow down, allowing black Texans to appreciate their heritage, uninterrupted. The melodic and afrofuturistic tones of “Things I Imagined,” “Dreams,” and “Time (is)” remind me of the contentment I’ve often felt while sitting silently outside with my grandma at her house on the edge of Lufkin, where old houses rest on long stretches of empty land, hidden miles behind ranches, where the red dirt and the tall, dark green pines offer us solace from hypervigilance and respectability politics.

Alongside those moments of grace, Solange adds funkadelic beats and bass with songs like “Almeda.” The direct and repetitive lyrical references to “black-owned things” and beats reminiscent of those produced by DJ Screw highlight Houston’s rich black history.

The visuals for When I Get Home only serve to strengthen Solange’s homage to the identities of black Texan women. Alongside black car show culture and strippers, Solange highlights Houston’s black business sector, calling particular attention to three black women with 1980s-inspired banana peel ponytails and long acrylic nails. The beauty industry has offered many black women a way out of domesticated work into business ownership; Solange honors this by featuring these women in an office space.

The visuals in songs like “Way to the Show” and “My Skin My Logo” are a celebration of a different vision: Texas country life. In parts of “Way to the Show,” Solange wears a nude brown two-piece while gracing a saddle alone, her long, wavy black hair stretching to the middle of her back. She’s a stallion—also a term used in the South for an attractive black woman—showcasing her beauty without the hindrance of European beauty standards.

Solange also highlights the role of women within Southern black tradition. In the late 1800s, black cowboys and cowgirls made up about a third of Texas’s settlers in Texas; after railroads and barbed wired reduced the need for cowhands, ranch jobs became more scarce, but a vibrant black rodeo and trail riding scene remained. Those very same cattle herding, roping and horse riding skills, along with cowboy hats and boots, have merged with contemporary black life and culture. In “My Skin My Logo,” which features a black trail ride set to a dizzy beat, black cowboys ride confidently down the fractured streets of small neighborhoods. They’re juxtaposed with women riding, with pink-trimmed saddles and boots to match—not seated behind men, but holding their own.

Imagine the space Solange has taken and reclaimed for young black girls, especially those from rural Texas, in the same place where James Byrd Jr.’s family preserves his memory beyond the scope of national media attention; where a Lufkin High School class introducing only black girls to black female literature was discontinued after white parents complained that the class equated to segregation; where my mother, my sister, and I were called “niggers” and told to go back to Africa during a bake sale. In a space where we often have to live alongside stereotypes, where we’re expected to care for others more than we care for ourselves, Solange shows us how black Southern women can take agency and celebrate their physical and spiritual selves.

There is no Texas without the women who contribute to black cowboy culture, but that narrative is often cast aside by outsiders for John Wayne, teased blond hair, and country rock aesthetics. In When I Get Home, Solange reaffirms Southern black country identity, allowing us to honor our culture and its history.

Tags: Music, Solange, When I Get Home 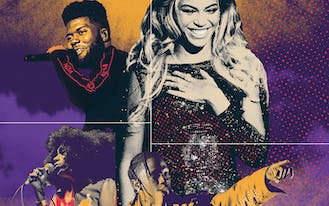 The Power Issue: Beyoncé, Solange, Travis Scott & Khalid Are Telling the World That Texas Isn’t What People Think It Is 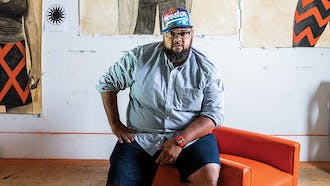