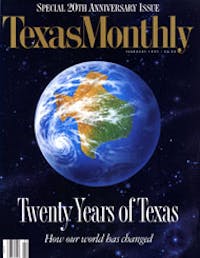 Listen to Doug Sahm sing and play guitar, fiddle, or piano, and you’ll learn all you need to know about country, rock, blues, conjunto, Cajun, and other indigenous sounds, how they are part and parcel of the Texas music experience, and why no one else covers all that territory as skillfully and as authentically.

When I first encountered him in 1973, holding court at Soap Creek Saloon, a wonderfully decrepit roadhouse in the hills west of Austin, Douglas Wayne Sahm already had survived an astounding number of trips, as he calls them: the child prodigy trip, making records and playing steel guitar on the Louisiana Hayride before he was thirteen; the South Texas rock and roll teen sensation trip while still a student at San Antonio’s Sam Houston High; the pop-star trip as the leader of the Sir Douglas Quintet and the composer of the Top 10 smash “She’s About a Mover”; the San Francisco exile trip during 1967’s Summer of Love, when he articulated homesick yearnings in songs such as “At the Crossroads,” noteworthy for the line “You just can’t live in Texas if you don’t got a lot of soul”; and his 1971 Big Red trip, when he was pictured on the cover of his back-to-the-roots album The Return of Doug Saldaña holding a bottle of the rubious soda water.

Nothing, though, compared with those nights at Soap Creek, one of the few places in Texas where a longhair with John Lennon specs and an Ernest Tubb Western hat could mix his “y’alls” and “yew bets” with “far outs” and “mind-blowin’s” without getting stomped. Between the music and the look, Doug was the ultimate cosmic cowboy, effortlessly improvising Western tradition and hippie attitudes over a rock and roll beat. Night after night, with the dance floor packed, Doug worked his cross-fertilizing magic in a low-ceilinged pressure-cooker atmosphere, inevitably taking off on some wild free-form tangent before last call rolled around. Chalk it up to being raised in Santone beer joints around ethnic whites, blacks, and Mexicans who thought nothing of singing B. B. King in Spanish, interpreting blues on a fiddle, or jazzing up a polka with an accordion and bajo sexto guitar.

Though most of the records Sahm made were not big hits, he did compose two songs, “Cowboy Peyton Place” and “Groover’s Paradise,” that accurately summed up the fledgling Austin music scene. “In them days, you didn’t have all these HIV trips and ‘let me check your credit card before I talk to you’ attitudes,” he recalled. “It was a very sexual town. It was a good sexual thing; it wasn’t bad. The girls were beautiful, and the guys were ready. It was like a movie.”

The reel started coming unwound in 1977. Alcohol, drugs, and progress took their tolls. By 1980, Soap Creek had been demolished for a subdivision and strip shopping mall while the Armadillo World Headquarters, the countercultural nexus of Austin and Texas, closed its doors for good.

“You always had that feeling in the back of your mind that it wasn’t going to last forever,” he said circumspectly. “I did, at least, because I’d already seen the Haight go down the tubes.”

Sahm reacted by embarking on even more trips, reviving the Quintet with his sidekick, Augie Meyers, to cash in on the new wave fad, then moving to Sweden, where he had a hit, “Meet Me in Stockholm.” He hid out in the Ozarks and British Columbia before coming back to Texas in 1988 to make a record for Clifford Antone, the Austin blues impresario. And he began writing with his son Shawn.

Then in 1989, just when retirement to that great Holiday Inn Lounge Gig in the Sky seemed inevitable, he joined forces with Meyers, onetime mentor Freddy Fender (a.k.a. El Bebop Kid), and accordion great Flaco Jimenez to form the Texas Tornados, a Tex-Mex supergroup that serves up a mixed bag of regional jukebox favorites of the past forty years as well as originals that don’t sound like they were written by graybeards. Three albums down the line, the Tornados can draw 22,000 to Sea World in Doug’s hometown (playing, not coincidentally, many of the same songs I first heard at Soap Creek) and pack halls as far away as Japan, where fans do not necessarily understand the nuances of salsa picante or Big Red. The lines on his angular face may be etched a little deeper, the hair may be thinner, and the vocal pipes nowhere near as durable, but for all the outward signs of aging, Sahm still knows his way around a young man’s game. He has outlasted the British invasion, psychedelia, progressive and urban country, the blues revival, disco, punk, metal, and every other significant trend since 1955-save for a recently defined creation known as Texas music, an all-encompassing style that aptly describes every one of Sir Doug’s musical trips. He may not be a superstar on the level of Willie Nelson or ZZ Top (although his ego can be just as big), but without him, Texas music just wouldn’t be whatever it is.