The U.S.S. Texas, a historic vessel now moored near the San Jacinto battleground site, was commissioned in 1914. It is the second Navy battleship to bear that name. The original Texas, authorized by Congress in 1886 but not completed until 1895, was the first American steel battleship, but because of its light armament and the placement of its turrets, it became outmoded before it was launched. The first Texas came to an ignominious end as a target for naval gunnery practice. The second Texas is a far more formidable ship. With a main battery of ten 14-inch guns mounted in pairs on five turrets, it was suitable for the long-range duels that characterized naval warfare in World War I.

The battleship sailed with the British fleet in the North Sea during the first world war, and in World War II it shelled beaches in North Africa, Normandy, and Iwo Jima. Over the years its appearance was altered: its two cage masts were replaced with tripod masts and a fire control center was added to the foremast; its navigation bridge was enclosed; antiaircraft guns were added to its armament; and a catapult to launch aircraft was built on top of turret number three. One area, however, hardly changed: the forward wardroom, which served as the senior officers’ mess.

The forward wardroom is located on deck two, just below the guns of turret number one and adjacent to the senior officers’ cabins. It spans sixty feet—the width of the ship’s bow—and is about twenty feet deep. It was furnished with a long dining table in the middle and sofas, easy chairs, and coffee tables in the corners. Bookcases, serving tables, and a sideboard stood against the walls. By 1945 about forty lieutenants, lieutenant commanders, and commanders took their meals there.

One alteration had been made in the forward wardroom during the ship’s early years of service. When the Texas was commissioned, two of its five-inch guns were positioned in the wardroom, one at each end, and fired through gun ports in each side of the ship. During World War I the crew discovered that the ports leaked badly in rough weather, flooding the floor. Moving those guns was the first order of business when the ship returned to New York after the war, in 1919.

As with all U.S. Navy battleships, the wardroom was not only a dining room but a gentleman’s club. Its etiquette was derived from naval customs that went back to the Revolutionary War. The executive officer of the ship was the president of the wardroom and occupied the seat of honor at the dining table (the ship’s captain took his meals in his cabin and entered the wardroom only by invitation). The other officers were seated and served in the order of their rank and their seniority within that rank, which was engraved on the silver napkin rings at their places. Promptness at meals was imperative, and all officers remained standing until the executive officer was seated. Officers who were late might be required to make a speech explaining their tardiness or even dance a jig. No officer entered the wardroom covered; there were compartments for officers’ hats beside both doors to the wardroom. No officer left the wardroom without first asking the executive officer to excuse him.

Officers paid for their own meals. An elected treasurer, usually a lieutenant, was responsible for purchasing groceries. The total grocery bill was divided equally each month among all wardroom members. In the forties, a naval officer received a $21 monthly subsistence allowance. A treasurer who could provide decent meals for less than that price was a popular man indeed.

The wardroom’s tables were covered with white linen tablecloths at mealtimes, and meals were formally served from silver platters by mess stewards wearing starched white coats. Nothing was ever placed on the table to be passed. After meals the tablecloths were removed and the tables were covered with green felt cloths, on which the officers could play cards, checkers, and other games.

Every battleship wardroom was provided with a set of silver serving utensils, donated by the state after which the battleship was named. The Texas had two sets, a 14-piece set from the original ship and a 28-piece set designed and made by the Gorham Silver Company in 1914 for the new vessel. The newer set was paid for by funds raised by Texans all over the state. The largest single donor was the Young Men’s Business League of Waco, which raised $1,600. The set included an epergne; two electrified candelabras; coffee, tea, and chocolate services with sugar bowls and creamers; water pitchers; and serving trays, all in the popular Mission style and all adorned with some kind of visual reference to the state of Texas, usually the Lone Star or a cluster of cotton bolls. The most imposing piece was a twelve-gallon punchbowl with cups and a ladle.

The punchbowl rested on a separate silver plateau base. In keeping with the Mission aesthetic, it is far more restrained in style than the smaller punchbowl that came with the 1895 service, which featured a hand-painted enamel inset depicting the Alamo. Its most elaborate ornamentation is its two handles, standing figures of Stephen F. Austin and Sam Houston affixed to plinths. One side of the bowl is engraved with an image of the state capitol building, surmounted by a portrait of Texas governor Oscar Branch Colquitt. The other side features an image of the Young Men’s Business League building in Waco.

The Texas was decommissioned in 1948, but despite the battleship’s distinguished record, nothing stronger than grape juice was ever served from this magnificent punchbowl. The same year that the Texas was commissioned, Secretary of the Navy Josephus Daniels, a strict prohibitionist, declared all U.S. naval vessels dry. 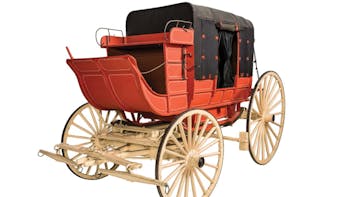 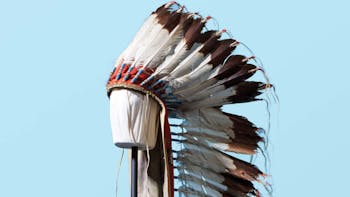 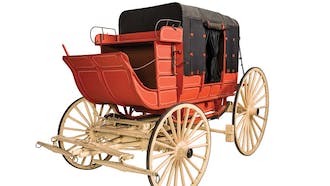 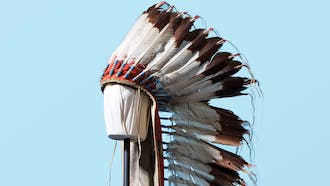 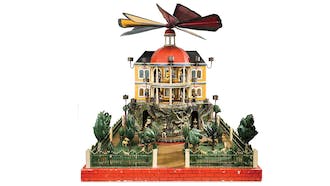 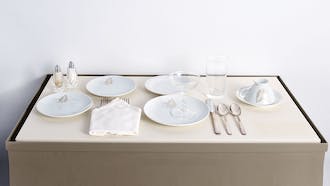