Chris Layton and Tommy Shannon, of Double Trouble, the band guitar legend Stevie Ray Vaughan fronted for years, sat in a North Austin coffee shop on a recent afternoon, trying to wrap their heads around the last three decades. It is coming into focus with the Tuesday release of the 30th Anniversary Legacy Edition of Texas Flood, Stevie Ray Vaughan and Double Trouble’s debut album.

“Where did the time go?” said Layton, Double Trouble’s drummer. “I can tell you it doesn’t feel like thirty years since we drove to California to make Texas Flood.”

That drive, in the fall of 1982, came at the invitation of singer-songwriter Jackson Browne. The band was already a hit on the Texas club circuit, but their 1982 gig at the Montreux Jazz Festival in Switzerland brought them a new level of fame. David Bowie saw the show and later invited Vaughan to play on his Let’s Dance album, and Browne offered free studio time to the as-yet-unsigned and unrecorded group.

“We didn’t go out there to make a record,” Layton said of their 72-hour session at Browne’s studio in Los Angeles. “We just played our songs three times through, live. To us, we were just making some tapes because a cool guy said he’d give us his studio. We didn’t even bring tape. We ‘recorded over used tape. There are old Jackson Browne songs under Texas Flood.”

Thanks to Browne, Texas Flood got made, but because of Bowie it almost never got heard.

After Vaughan recorded on Let’s Dance, he accepted an offer to tour in Bowie’s band. But after rehearsing for the tour, a string of personal and business disagreements between Bowie and Vaughan led Vaughan to quit.

“Nobody quit David Bowie,” Layton said. “And immediately, everyone asked, ‘Who was this skinny Texan blues guitar player?’ It put him on the map. People were intrigued.”

Even with the buzz over ditching the Bowie tour, Mr. Layton said he remembers thinking Texas Flood, released in June 1983, had a lot going against it. The album was raw and muscular, flush with guitar histrionics and deep Texas blues, mixing both original compositions and tunes from Howlin’ Wolf, the Isley Brothers, and Buddy Guy. By comparison, the top of the Billboard Hot 100 in June 1983 featured singles from Culture Club, Men At Work, and Rick Springfield.

“I brought the tapes back home to some friends in Corpus Christi,” Layton said. “They mostly said, ‘ Great guitar player, but who wants to listen to that? You have to stop doing the shuffles and slow blues. You should be more like the Psychedelic Furs.’ But I think it worked because it was very different than what was on the radio. And while it was a very traditional homage to the blues, there were kids that thought it sounded so different that it was something new.”

“Right after the record came out, we pulled up to the place where we were supposed to perform in San Francisco,” Shannon said. “We’d played there a few times before to maybe 50 people. Now there were hundreds outside that couldn’t get in. We pulled up and thought, ‘Who’s playing here tonight?’ We couldn’t fathom they were here for us.”

In October 1983, the tour for Texas Flood took them to Philadelphia for a sold out show at the Ripley Music Hall sponsored by rock radio station WMMR and recorded for broadcast on the nationally syndicated King Biscuit Flower Hour program. The recording, which is available commercially for the first time as the second disc of the anniversary edition, features a 12-minute closer that combines Jimi Hendrix’s Little Wing and Third Stone from the Sun. Before launching into it, Vaughan warns the crowd about the detour from traditional blues. “Here’s a little thing that’s a little bit wilder than you might expect,” he said.

Layton said that early on, in Austin, “There were blues purists that wanted us to stay with the covey—to be purists too. Stevie was always a little tormented by that,” he said. “I think by the time of Texas Flood, the audience wanted to see a wild, loud blues guy. I think Stevie’s warning was a holdover from the transition out of Austin, like ‘I hope this is okay.’”

Although Vaughan never played guitar conservatively, his estate and Sony Music, who own the rights to Vaughan’s recordings, have been conservative in posthumously releasing albums, live shows and box sets. Outside of the Texas Flood re-issue, the only release on the horizon is a box set tentatively planned for the winter that collects all four of Stevie Ray Vaughan and Double Trouble’s studio albums in re-mastered form on vinyl.

Layton says he likes the less-is-more approach, but he is always eager to see Vaughan reach a new, younger audience.

“I meet young kids all the time who say, ‘My dad just turned me on to your records six months ago,’” Layton said. “Part of me thinks it’s the same old thing, a record we made thirty years ago. But I want a new generation to hear it. To me, it’s not an effort to sell the same record to someone who’s bought it three times before. I want to sell it to the kid that’s never heard us.” 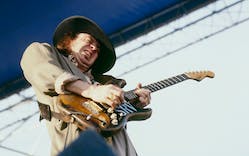 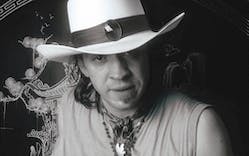 Stevie Ray Vaughan’s Childhood Home Is on the Market