The state of Texas has long been a hotbed for crime fiction, as evidenced by the enduring reputations of two the greatest noir novelists of the twentieth century. Patricia Highsmith was born in Fort Worth in 1921 and set much of her debut novel, Strangers on a Train (1950), in the state; Jim Thompson spent his high school years in Fort Worth in the 1920s and explored the rotting underbelly of small-town Texas in books like Pop. 1280 (1964) and The Killer Inside Me (1952).

In recent decades, the likes of James Lee Burke, David Lindsey and Rick Riordan (who wrote a number of mysteries set in San Antonio before creating his popular young adult Percy Jackson books) have carried forth the tradition, conjuring twisty tales of sin and corruption set against an unforgiving Texas backdrop.

Texans, as any bookseller in the state can attest, love to read about Texas. But Scott Montgomery, crime fiction coordinator for the Austin bookstore BookPeople, suggests that a larger trend may explain the abundance of Lone Star mysteries. “People outside of the state see how influential Texas is on the rest of the country, whether it’s the Wendy Davis filibuster or the Austin music scene,” he said. “And that creates a curiosity about our area.” (Montgomery will host an evening devoted to Texas thrillers at BookPeople on July 22.)

Summer has always been a fertile season for genre novels, and the seven recent and forthcoming Texas mysteries and thrillers discussed below offer something to satisfy just about every reader’s taste. On the surface, they don’t have much in common; the settings range from turn-of-the-century East Texas to modern-day suburban Dallas, and the authors include veterans, underappreciated journeymen and relative newcomers. One thing these writers all have in common, though, is an appreciation for the outsize personality of the state—a place big enough to play host to steely Texas Rangers and gun-toting soccer moms alike.

The Right Side of Wrong

This is the third novel in a series by Wortham, who based the fictional small-town setting of Center Springs on his childhood home, Chicota, in northeast Texas. Montgomery cites this book—about a constable trying to solve a group of seemingly unconnected killings—as a sleeper that deserves wider attention. “It’s one of those series where you don’t realize what he’s doing with it until you start reading the second and third books,” he said. “The books are about how the events of the 1960s affect one small town.”

A New Yorker relocates to the fictional North Texas suburb of Clairmont, where she becomes entangled in the lives of a group of viperish housewives. The Grapevine-based Heaberlin combines a culturally pertinent suspense story (the plot revolves around the main character’s struggles with the repercussions of an unreported date rape) with satirical observations about Texas’ moneyed suburban elite. (Full disclosure: Heaberlin was once my editor at The Fort Worth Star-Telegram.)

These Mortal Remains and Long Fall From Heaven

A former cattleman and history teacher who lived in Tyler, Burton published his first novel, The Rogues’ Game, in 2005. He died in 2011, and this summer brings two posthumous volumes.

These Mortal Remains follows the character of Sheriff Bo Handel, who was introduced in Nights of the Red Moon (2010), as he uncovers a history of racism and violence in fictional Caddo County in East Texas.

Long Fall From Heaven, about two serial killers who terrorize Galveston in 1943 and 1987, was conceived by Burton, but he was too ill to write the novel and asked a friend, Wier, to do so instead.

Since 1986, Crider of Alvin has been turning out novels in his Dan Rhodes series, about a sheriff in fictional Blacklin County who solves folksy mysteries involving barbershop quartets and beauty parlors.

This twentieth installment finds Rhodes dealing with the murder of a college instructor, but  rest assured, the main character still finds time to ruminate about such Texas glories as his beloved—and now discontinued—Dublin Dr Pepper.

Land, based in Rhode Island, has cited a longtime fascination with the Texas Rangers—as well as a determination to write a female-driven suspense-novel series—as the inspiration for his Caitlin Strong novels. Strong is a fifth-generation ranger who, in this fifth installment in the series, has to  deal with the lingering effects of a century-old drug war. “There’s such strength and independence in Texas women, so I’m very happy to see they’re getting represented,” said Montgomery of a genre that is usually fueled by testosterone.

This genre-busting Nacogdoches author’s latest book draws on both western and noir traditions. Set in East Texas at the turn of the twentieth century, the story follows an orphaned boy, a dwarf bounty hunter and an African-American gravedigger out  to rescue the boy’s kidnapped sister. 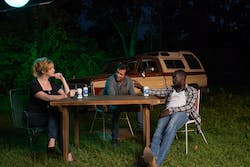 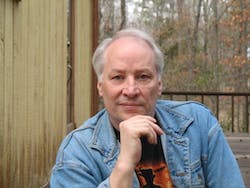 The Ascent of Joe Lansdale