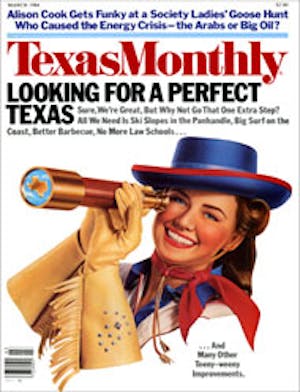 Breathes there a native Texan who has never snagged a pair of jeans on a strand of barbed wire? Today barbed wire seems a natural part of the Texas landscape, but to our great-great-grandparents it was anathema. Once called the devil’s hatband, it brought controversy, bloodshed, and ultimately, civilization.

No one person invented barbed wire, but it was Joseph F. Glidden of De Kalb, Illinois, who first applied for a specific patent in 1873. His original double-strand design, the Winner, lived up to its name; it is the best-selling barbed wire of all time. Glidden was also the winner in a welter of litigation that reached all the way to the Supreme Court after some dozen other inventors claimed legal priority.

With wounds of the Civil War still fresh, Texans at first regarded the Yankee invention with suspicion. Under the unwritten law of the open range, Texas’ grass and water belonged to all and could be freely used for livestock. If barbed wire was allowed to slice up the countryside, landowners could strip their neighbors of grazing and watering rights, and fences would block the drive to market. Worse, farmers might get the idea that they were welcome in cow country.

Inevitably, though, men of foresight and wealth, such as cattle barons Charles Goodnight and Shanghai Pierce, recognized the new material’s potential. Neither bulky nor flimsy, barbed wire was cheaper than wood and easier to erect, and it could withstand the extremes of Texas weather. Most important, it would allow ranchers to selectively breed their stock by fencing out strays. Soon barbed-wire fences were everywhere, and sure enough, the small cowman was the victim; the open range was gone.

By 1883, fence cutting was rampant. At night, gangs snipped wire to let herds through or merely to retaliate against the fence stringers for barring their way. From his ranch in Frio and Me-dina counties—fence-cutting hot spots—the legendary Bigfoot Wallace lamented that barbed wire was “startin’ in to play hell with Texas.” Governor John Ireland sent out the Rangers to quash the rising violence and called a special session of the Legislature. Fence cutting became a felony, and barbed wire became a fixture. In time, pliers and staples for laying and mending fences became as essential to the cowboy as his horse and rope. But barbed wire still created problems. The worst was its use in the drift fence, wire strung along the south end of a ranch to prevent the drift of cattle during the winter. Caught between instinct and the wire, cattle piled up against drift fences and froze by the thousands in the “big die-ups” of the 1880’s. Another problem was “vicious” wire, which had razor-edged barbs that could gash and cripple. Too dangerous for the range, it later made a comeback on modern battlefields.

By the 1890’s a thousand varieties of barbed wire had sprung up, including Baker Perfect (the number two wire of all time), the Brotherton Barb (number three), Split Diamond, Hold-Fast, Twist Oval, Buckthorn, Spur-Rowel, Necktie, Arrow Plate, and buffalo wire. These nostalgic names are kept alive by the 250 members of the Texas Barbed Wire Collectors Association, who still see color and drama in something the rest of us regard as no more exciting than a telephone pole. Urban Texans don’t have much cause to mention “bob wahr” except to show off their accent when there’s a Yankee around.

Barbed wire remade Texas. Once an empire of grass and cattle, Texas slowly became a patchwork of ranches and farms, stitched together by miles and miles of wicked-looking wire. There are still seas of grass in Texas—islands, really—where thousands of head of cattle run unchecked. But such untouched stretches are rare, and barbed wire no longer threatens those reminders of the open range; it preserves them.