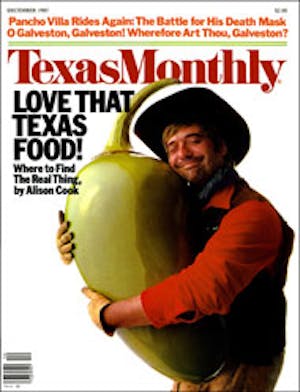 “Christmas Eve fell as balmy as April,” wrote O. Henry in 1903, thereby summing up the distinguishing mark of a Texas Christmas: it’s hot. O. Henry didn’t know the blizzardy side of the state, living as he did in the south of it, but he knew that few native Texans witness many white Christmases. Most of us resign ourselves to green ones. Unless we live in East Texas, where pines are native, we have to buy our Christmas trees from the Optimist club. Without fireplaces, we lack the proper place to hang stockings, roast chestnuts (well, pecans then), and look for bootprints in the morning ashes. It makes us a little wistful, but we have faced the inescapable truth: the Christmas of Currier & Ives will never be ours.

Luckily, over the years we have created traditions of our own. In the case of the Christmas tree, our forebears used cedar, a pestilent plant that had never before done anyone much good. A. C. Greene recalls childhood trips to fetch “the least lopsided and wind-whipped” tree. If cedar was unavailable, a sapling, tumbleweed, or cactus might serve. Decorations varied—popcorn garlands, candles, strings of red chiles and garlic. On top, of course, was a lone star.

Texas does have mistletoe, which, like cedar, is a nuisance that redeems itself only in December. All over the state you can spot mistletoe snippers gingerly scaling barbed wire to cut bunches from beleaguered mesquites by the side of the road. The familiar shrub with its pearly berries must have provided European immigrants with a welcome reminder of home.

In addition to Christmas kisses under the mistletoe, immigrants brought to Texas a wealth of other customs. The Germans offered Kris Kringle and pfeffernuesses and caroling; around the original German settlements you can still hear the words “stille Nacht, heilige Nacht” sung to a well-known melody. Mexico gave us buÒuelos, poinsettias, and luminarias, those lanterns made of candles inside sand-weighted paper bags. Bright Mexican goods and decorations, which seem so gaudy most of the year, fit right in at Christmastime.

Our most influential culture, though, was that of the cowboy. The range life was a solitary one, and holidays meant a rare chance to socialize. Most towns held a dance, and cowboys would ride all day to attend. Caroling was a mite civilized for early Texas tastes, so cowboys initiated the Christmas serenade, a shivareelike procession whose sole purpose was to make a huge commotion. On Christmas morning they settled down long enough for a church service or a few impromptu prayers; for all their horseplay, cowboys were believers. Later in the day, married couples invited them in for revelry and chow; they reciprocated by smuggling in trinkets for the children, who surely redoubled their faith in Santa when goodies miraculously appeared in their stockings, with not a store for miles. Texas kids, J. Evetts Haley wrote, “knew exactly what Santa’s sled and reindeer looked like”—after all, they grew up around harness and livestock.

Not so commonplace on the frontier was overindulgence, but during the holidays even thrifty Texans enjoyed this most universal of Christmas traditions. Cooks cheerfully used up hoards of dried fruit and sugar to make treats like fruitcake, an old Texas favorite, but the real delicacies were fresh foods brought in for the occasion. Bertha McKee Dobie remembered her father’s once asking “the name of that vegetable that is shipped in at Christmas.” It was celery. Eggs went for eggnog; oranges were sugarplums. The high point of any gathering might well have been the whiskey, for Christmas was one day when drinking could be done in public and to excess.

Excess has become a Texas tradition too. We always try to be the biggest, the noisiest, the best. We string colored lights on everything from fences to pump jacks, drink Noche Buena instead of wassail, and ring cowbells instead of sleigh bells. Who needs snow-covered pine trees anyway? They just block out the stars in our big December sky.