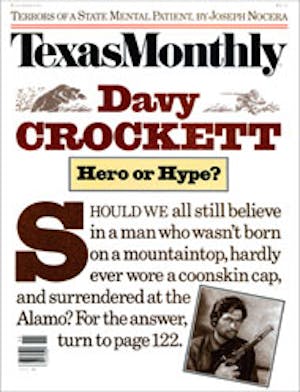 Have you ever seen Texas from an airplane on a Friday night in the fall? Down in the flat darkness are a thousand bright oases of brilliant lights with green rectangular fields in the middle. If you could fly low enough, you might see boys running up and down the field, slamming into one another, and girls cheering them on. You might see fans sitting on hard bleachers, raising their fists in the air and shouting. And you might see any of these people—or all of them for that matter—eating Frito pies.

That’s right. Frito pies are still a mainstay at football games. Sometimes they aren’t served in the bag anymore—after all, it’s hard to open one of those miracle plastic bags of Fritos with your hands these days—but even in a Styrofoam container, it’s the same old Frito pie. Fritos smothered with chili is a greasy, spicy delight. How can you beat that? Add some shredded cheese. Add some strong onion.

Frito pie is a marriage made in heaven. You know why? Because corn and chili powder go together. They’ve probably gone together since the Maya, and they go together today. That’s the secret of Tex-Mex cuisine. Corn and chili are complementary flavors. But that’s not the whole story. Fritos are salty and absorbent. If you want to get technical, Fritos absorb grease, and good chili has a lot of grease. Furthermore, the Frito retains its crispness even when chock-full of grease. Try chili on top of potato chips, if you don’t believe me. In fact, try chili with Doritos or Tostitos or any one of the other dry corn chips. It won’t do. The Frito has integrity. And look—frito, a Spanish word, means “fried.” I’m sure they fry Fritos in the purest of vegetable oils nowadays—lard help us—but the idea remains the same.

When I first began to contemplate the Frito pie, I called a friend in Chicago. She had never heard of it. I tried San Francisco. My friend out there had no clue as to what I was talking about. I tried a close friend in New York who eats out constantly and also studies food. He said there was no such thing in his experience. He wanted to know how it was done. I told him that you slit a bag of Fritos lengthwise and just ladle in the chili. He said he would try it, but I don’t have much hope, even though it is possible to find Frito pie in some New York restaurants. Television news host Linda Ellerbee remembers the Frito pies of her native state with such nostalgia that she coaxed a New York eatery into including the dish on its menu. And a New York restaurateur, Calvin Holt, is so proud of his gourmet chili pie casserole (complete with sour cream, Monterey Jack, and cream cheeses) that he spurred the Uptown Versus Downhome Chili Pie Challenge, whose results should be known by Thanksgiving. Still, Texas remains the best place to savor Frito pie in a big way: In October the Odessa Chuck Wagon Gang cooked up a twenty-foot-long, ten-thousand-pound Frito pie as part of the Permian Basin Oil Show.

The origin of the Frito pie is heavily disputed. One day I saw a delivery-truck driver in the Oak Lawn section of Dallas walk into a 7-Eleven at lunchtime and buy a big bag of Fritos and a can of chili. He microwaved the chili, paid his tab, walked outside, slit the bag with a pocketknife, poured the chili over the Fritos, and ate his meal while contemplating the traffic. Did that man invent the Frito pie? Maybe. But Frito-Lay of Dallas likes to think that Daisy Doolin, the mother of the company’s founder, was the first to pour chili over Fritos, in the thirties. The Doolins had so many Fritos around the house, you know, like so much turkey after Thanksgiving, and they were living in San Antonio, where chili is common, and all in all, that’s probably how the pie came to be. But others have claimed credit for it, and that makes sense, because you cannot avoid pouring chili over Fritos. Tonight you’ll find Frito pie on the dinner table in a thousand homes from the Red River to the Rio Grande, and a hundred school cafeterias will schedule it for lunch tomorrow.

But don’t take my word for any of this. Sometime this fall, when the weather is crisp, go out to a rural football game, the farther west the better, and pay a dollar for a Frito pie. The lady in the concession stand will tell you that she made the chili herself, and the hot bag of Fritos will warm your hands. The team will score, and you’ll gobble down the pie with a plastic spoon and never forget it.