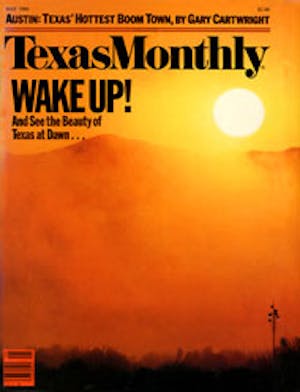 When we were kids, my brothers and I used to pass the time waiting for our rural school bus by mastering the cattle guard at the intersection of our gravel road and the two-lane blacktop. Teetering along the parallel iron bars over the shallow pit, we imagined ourselves to be aerialists like Karl Wallenda on The Ed Sullivan Show. After a few weeks of scuffing our Buster Brown shoes and risking wrenched ankles and broken limbs, we were adept enough to run across backwards and sideways with our eyes closed, using our book satchels as balance poles. To us the cattle guard was a fine plaything; it served as a cache for our cigar boxes of small-boy treasures, and the pipes made a great booming rumble when Dad drove the Ford across.

Because we saw cattle guards everywhere we traveled, they seemed a perfectly ordinary part of the country landscape. We never dreamed that they had an inventor and that this unsung hero had an uncanny insight into bovine psychology. The concept is ingenious: Cattle have an instinctive fear of falling and injuring themselves, especially their legs. If you put something in their way that they cannot readily walk across, and dig a pit under it to intensify the appearance of danger, they will stop—well, 99 percent of them will stop.

Ever since man began to pen up animals, he has sought some device that would allow him easy passage through a fence while keeping the herd in check. A gate is the obvious solution, but it is tedious to deal with gates day after day. The stile dispenses with opening and closing the gate but can be used only by a person on foot. One early English cattle barrier involving a complex system of ditches with landscaped retaining walls had the unlikely name of “ha-ha” (possibly because the joke was on the cows), but while it may have been aesthetically pleasing, it was as tiresome to negotiate as a gate.

The quantum leap in cattle guard design came with the building of the great American railroads, in the 1830’s. As an absolutely necessary measure for keeping loose cattle off the tracks, pits covered with bars were dug on roads that intersected the rail line. The device was so successful that it was employed in Archer County in 1881 on the stagecoach run from Henrietta to Archer City. That was the first recorded use of a cattle guard for nonrail traffic in the world. Not until travel by car began to be common, in the 1900’s, did the invention proliferate, though. In the course of a year, one well-placed cattle guard can save a rancher as much as a week of work time and ten miles of walking to and from his pickup to open and close a sixteen-foot gate. When oil boomed in Texas after the turn of the century, the cattle guard came into its own. Oil company men had even less time than ranchers to hassle with gates, and soon more cattle guards were found on oil lease roads than anywhere else. Time is money; good-bye, gate.

Inexplicably, more than a decade passed before anyone thought to corner the market on the idea. On December 21, 1915, William W. Brian of Woodsboro duly filed the first patent on the highway cattle guard. It proved to be an event of singularly little historical importance. Because a wide range of variations on the design work equally well, no one could enforce a patent monopoly. As a result, cattle guards remain primarily a bit of folk technology. Sure, you can buy them ready-made, but most are one of a kind, constructed on the spot from cedar poles, crossties, two-by-fours, scrounged rails, drilling stem, old boiler flues, and every conceivable type of pipe. It’s doubtful that anyone will come up with a simpler and more effective design, though the Japanese have yet to be heard from on the matter. Today cattle guards can be found in every state of the Union save Rhode Island and Massachusetts. They do their duty in foreign countries from England to South Africa and from the Australian outback to the vast ranches of South America and Canada (where they are often referred to as Texas gates).

This century has seen the Lone Star State move from the age of the cow chip to the age of the microchip, and as we continue into the future, we inevitably jettison many relics of the past. Lowly cattle guards, however, are still with us, having outlasted stagecoaches and flivvers to become durable fossils in the modern world. The vehicles that rumble across them in the year 2000 may be powered by fusion of some as-yet-undiscovered process, but the small boys watching those vehicles go by will still look at the cattle guards and wonder how hard it would be to walk across them and whether cows are really that stupid.