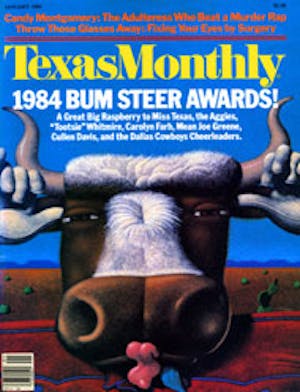 When I was in the fourth grade, for my ninth birthday I got my first real purse. No doubt I had had some kind of purse before that time—a hand-me-down from my mother or a plastic zippered souvenir of a historic site—but the purse my parents gave me that year was special. It was a Collins purse.

The Collins purse was invented by Enid Collins, who grew up in San Antonio and majored in fashion design at Texas Woman’s University in the forties. It’s easy to imagine anyone named Enid as a prim, white-gloves type, but Enid Roessler was actually an unconventional woman. She married sculptor Frederic Collins, and the two eventually retreated to a ranch outside Medina, where they earned their living designing purses. Their first bags were lovely but prohibitively expensive; handmade of leather or Belgian linen, they sold for as much as $100.

But in the early sixties, Enid came up with a simple, innovative idea: the box bag, which was nothing more than a decorated wooden box, eleven inches by five and a half inches, that cost $10 in 1963. By 1968 the demand for the purses was so great that a Medina factory was turning out a thousand of them a week—all silk-screened, usually by wives of local ranchers. Cinderella’s in Waco, Margaret’s in Lubbock, and Julien’s in Uvalde sold Collins purses; so did Neiman’s and Sakowitz and stores in Los Angeles, Carlsbad, Milwaukee, and New York.

Collins adorned her purses with the exotic: glittering carriages, foreign stamps, and proud peacocks. She also used subjects with which Texans were intensely familiar—ladybugs, roadrunners, and horses. Then she studded the boxes with jewels—rhinestones in every shape and color, imported from Czechoslovakia. Each purse had a name: “Carriage Trade,” “Wise Guys,” “Glitter Bugs.” Finally, each one was signed with the initials EC, as if it were an important work of art.

Enid Collins’ designs were boisterous. Things were always bursting and bucking and flying on Collins purses. “The Money Tree” bore a shimmering fruit of gold coins and colored stones, the horses on “Horseplay” kicked up their heels, the bird on “The Roadrunner” paced impatiently, as if at any minute it might stalk right off the box.

Of course, in other parts of the country, young girls who had access to more sophisticated accessories might have considered the Collins purse too tacky. But to us it was magnificent, just the kind of purse a little girl from Central Texas would invent for herself. The purses were delicate things (if dropped, they would splinter), but we took great care with them. To own such a fine thing meant that you were a lady, that you knew how to behave.

Collins purses may not seem the best things for girls with scraped knees and lofty ambitions. But they were. There’s a boldness and a restlessness to them that I didn’t see but surely felt as a child. They were noisy, for instance; mine always clattered with the sound of nickels and dimes and number two pencils. Though I tried, I couldn’t keep it quiet.

That was the secret of the Collins purse: Enid Collins drew us into a clever conspiracy. She urged us to make a ruckus, to show off—which, as it turns out, is just what those of us who were girls in the sixties grew up to do.

Girls probably don’t need or long for Collins purses anymore, growing up as they do now in a world where women can become doctors and lawyers and astronauts. The Collinses sold their business thirteen years ago; the current owners have added urethane handbags and shotgun cases to their inventory. But the old box bags are still around. I see them hanging on the arms of Hill Country matrons and lying on garage-sale tables, where they sparkle merrily alongside Barbie dolls and 45’s, reminders of a past we’ve lovingly left behind.