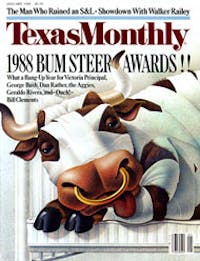 The name itself speaks of a Texas of another era. Today we might call it the Semiconductor Bowl or the Free Enterprise Bowl, but in 1936 Texas was still a Southern state and cotton was the ball game. Something must have been in the air that year. Southern Methodist University had just claimed its first—and only—national championship, only to lose to Stanford 7-0 in the 1936 Rose Bowl. J. Curtis Sanford, a Tyler oilman, returned from that game determined that Texas would have its own New Year’s Day contest, which would be held in the six-year-old Fair Park Stadium, where Oklahoma and Texas were already playing every year. The Texas Centennial opened that summer on those same fairgrounds, and with that exposition, the state made its first tentative break away from the Old South. The Cotton Bowl Classic was born in that fertile moment when Texas was turning away from its defeated past and moving uncertainly toward its bright destiny. Sanford personally guaranteed $10,000 for the first bowl game, which saw Texas Christian University defeat Marquette, 16-6.

By 1940, when Boston College played Clemson and only 12,000 customers paid to attend, the Classic was being called Sanford’s Folly. That spring, however, the Southwest Conference and the Cotton Bowl Association agreed that the conference winner would play host to the annual game, and out of that marriage came some of the most memorable moments in college football history. My favorite: the 1979 ice bowl, when a frozen Joe Montana sat out most of the third quarter drinking soup to bring his body temperature back to normal, while Notre Dame was losing by 22 points to Houston. Montana returned with 7 minutes and 25 seconds left in the game to lead Notre Dame to a 35-34 victory. The worst bowl game ever played may have been the 0-0 tie between Air Force and TCU in 1959. The weirdest was the 1954 game, in which Alabama’s Tommy Lewis sprang off the bench to tackle Rice’s Dicky Maegle. Rice won, 28-6.

Until the forties the stadium seated a little more than 46,000 patrons on redwood bleachers, which were adequate until Doak Walker became a sophomore All-American and undefeated SMU appeared in its first Cotton Bowl Classic in 1948. SMU started playing its home games in the Cotton Bowl later that year. That was the beginning of the glory days for college football and the Southwest Conference in particular. No one better typified the clean-living, fair-playing sportsman than Doak Walker, and a second tier of seats was added to accommodate his fans. The next school year Walker won the Heisman trophy, and the stadium was enlarged again, to a capacity of 75,504.

In 1960 the Cotton Bowl suddenly became host to two professional football teams, the Dallas Cowboys of the National Football League and the Dallas Texans of the now defunct American Football League. It was the Texans I gave my heart to. With hundreds of other teenagers I joined the Huddle Club, which cost $1 for a season ticket. There was a nice air of unimportance about professional football back then.

In 1963, however, the Texans went to Kansas City and became the Chiefs, and the Cowboys had Dallas to themselves. Very quickly they began to demand a new stadium; the Cotton Bowl was too large, almost impossible to fill, plus it was sitting in the middle of a black neighborhood. Many of the Cowboys’ fans back then were blacks and lower-class whites for whom professional football was cheap and convenient entertainment. The City of Dallas, which owns the Cotton Bowl, tried to mollify Cowboys owner Clint Murchison by installing plastic bench seats and reducing the capacity to its present size of 72,013. Nevertheless, in 1971 Murchison moved his team to his new stadium in Irving, the one with the silly doughnut hole in the roof. Eight years later SMU also deserted the house that Doak built for the one that Clint built, and the Cotton Bowl fell into its current state of disuse.

Oh, rock concerts and evangelists still come. Grambling State and Prairie View A&M play a game there every year. There’s always the Cotton Bowl Classic, although with the decline and disgrace of the Southwest Conference, the game is usually eclipsed by the Rose, Sugar, and Orange bowls and sometimes by the Fiesta Bowl as well. Even OU has been talking about playing half its games with UT in Norman. The stadium remains, though, as a monument to a different era of football and a different Texas.