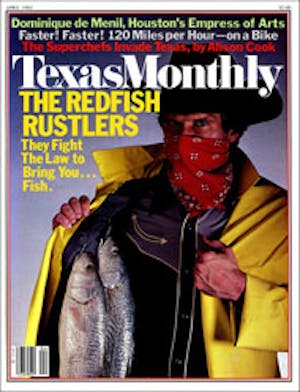 There is no mistaking a farm-to-market road. It is different from other highways: narrower, more winding, more attuned to the contours of the earth. You can’t drive as fast, and you don’t want to, because on a farm-to-market road the feeling is of driving on the land instead of past it. A good stretch of farm road is the apotheosis of a very Texan institution—the drive for no other purpose than to get the feel of the country—and that is why the farm-to-market road is to Texas what the freeway is to California: not just a highway but a symbol of the culture.

The FM road conquered at last the vastness and deep isolation of rural Texas. It was conceived as a way to keep people on the farm; instead it brought them to the cities. Farmers sent their crops and then their children down the FM road, and in time the prairies turned into shopping centers: A highway sign one block from the Houston Galleria identifies eight-lane Westheimer Road as FM 1093.

The first farm-to-market road was opened in 1941. FM 1 extended only three miles into the Piney Woods, and the farmer wasn’t even the main beneficiary—the road led to the Temple Lumber Company sawmill at Pineland—but the prospect of paved roads in the backcountry was enough to stimulate one of the major lobbying campaigns in Texas history. Its slogan was “Get the farmer out of the mud,” and its success was assured in 1949 when the Legislature guaranteed permanent funding for new farm-to-market roads. The act made a hero of its sponsor, Dolph Briscoe (after a long retirement from politics he emerged to be elected governor in 1972), but it made a mess of the state highway system. The law reserves for FM roads 1 cent for every gallon of gasoline sold in Texas—$91.6 million in 1982—plus another $15 million annually, which explains why there is still no four-lane highway between Houston and Austin but there is FM 2688 beginning at U.S. 83 and ending thirteen miles later at Briscoe’s Dimmitt County ranch.

Today farm roads make up well over half of the Texas highway system—41,000 miles out of 73,000. There are more than three thousand FM roads, numbered in order of construction, from 1 to 3440, but mergings of FM roads and upgradings to state highways have left gaps in the sequence: there is no FM 7, for example, or 29, or 42. The longest is FM 168, which runs for 140 straight-arrow miles through the cotton and grain country west of Lubbock without ever touching a town of 2,500. The shortest, just 528 feet, is FM 2413, connecting two highways in Robertson County, east of Temple. The most heavily traveled, of course, is Westheimer in front of the Galleria, which carries an average of 61,000 cars a day. The lowest traffic count, just 10 cars a day, occurs on FM 2167 in Briscoe County, which leads to a Boy Scout camp near Silverton. Some FM roads are officially known as RM, or ranch-to-market, roads because local ranchers objected to being called farmers by implication.

The farm and ranch roads are still the best way to see the real Texas. You can drive through citrus groves in the Valley and cotton fields on the South Plains. You can see the pastel wilderness of the Trans-Pecos on FM 170, the river road from Big Bend to Presidio, and watch the cottonwoods struggle for a foothold in the desert. You can follow RM 2627 below Marathon into Mexico across the only international bridge with no U.S. customs or immigration officials. You can preview the American West on RM 337’s hairpin switchbacks between Vanderpool and Leakey. You can take FM 2154 to Kyle Field for a Texas Aggie football game, or find remnants of the sharecropper South on FM 1416 near the Sabine River, or escape on FM 562 to a deserted coastal plain less than forty miles from the center of Houston. The farm-to-market road couldn’t keep Texas a rural state, but it could keep alive the notion that the soul of Texas still lies Out There, waiting to be discovered.