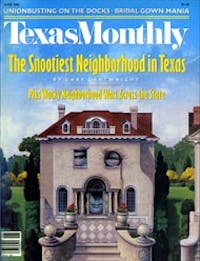 <On a steaming day after a spring or summer rain, a cone-shaped mound of dirt abruptly swarms with ants the color of dark canned cherries. Those sterile female workers break holes in the mound’s softened crust and rudely push out the ants that have translucent wings. Clumsy fliers, the males take off first, followed by the virgin queens. The nuptial flight of red fire ants ordinarily traverses less than a mile, though a strong wind can carry them much farther. The ants pair off and are thought to mate at 500 to 1,500 feet. The males then flutter down to die. The queen digs a trench, breaks off her wings, and lays her eggs. While nesting her brood, she feeds on her remaining wing-muscle tissue. In a few weeks, new workers strike out, foraging for spiders, earthworms, and aphid honeydew. Within a year, 11,000 ants have assembled another hard mound. An old mound can contain 300,000 workers. And each year the ants fly again.

Though the frontier is in flames, Texas has assumed the line of defense against the red imported fire ants. Natives of the Paraguay River’s floodplain in southern Brazil, the fire ants entered this country from a ship docked in Mobile, Alabama, sometime in the thirties or forties. Since then they have infested most of the southeastern United States and Texas. The march of fire ants has consumed 113 of our counties and 50 million acres. After infesting Hardin County in 1956, they quickly filled up the Piney Woods and blackland and coastal prairies—Texas’ extension of the Old South. Because hostile weather factors converge north and west of that area—fire ants are unable to survive freezes below 10 degrees or dry climates—the ants, and the buck, were supposed to stop there.

But fire ants adapt and disperse fanatically. When a flood threatens their existence, they abandon the mound in clumps that can reach the size of a basketball, then roll with the current until they find a shore. Humans help them travel, with highway and rail shipments of infested nursery stock, especially sod for lawn grass. Overgrazed ranches supply the favored habitat of short grassland. Fire ants have adjusted to cold winters in Lubbock by forsaking their mounds for the insulated warmth of partly buried walls. In the dry climate of Midland they find moisture in underground sprinkler systems. If they get past the desert Southwest, they’ll go all the way up the West Coast.

Why has a single species of ant conjured up visions of an environmental Maginot Line? In rural areas the hard mounds damage plows and other farm equipment. Infested tracts contain upward of forty mounds per acre, and in pastures the aggressive ants swarm right up the noses of grazing livestock, reportedly even killing calves born near a mound. Because they like open spaces and an easy food supply, such as potato chips, in urban areas they despoil school grounds and parks. They defend their territory by attacking in large numbers, and they sting repeatedly. On humans, the resulting large, itching welts burn more than most ant stings, which accounts for the species’ name. The next day, white blood cells raise pustules against the alkaloidal toxin. The ugly sores are easily infected. According to some allergists, up to 10 percent of the population may have violent reactions to the venom. Victims itch madly, their eyelids and lips swell, and they have trouble breathing. Physicians give the patient a shot of adrenaline and strong antihistamines to stop the anaphylactic shock. People die from fire ant stings.

In 1982 campaigning Texas agriculture commissioner Reagan Brown took reporters on a tour of fire ant mounds. Explaining the ants’ ferocity, Brown placed his hand on a mound. The commissioner’s televised wincing and slapping of his arm greatly enhanced the credibility of his challenger and successor, Jim Hightower. But fire ants were a political issue long before that comic episode. In the sixties the federal government encouraged the use of a fire ant poison called mirex, which, researchers later discovered, turned up as a carcinogen in fish and mother’s milk. After that substance was banned in 1978, the chemical focus shifted to Amdro, a biodegradable poison, and to various hormones that disrupt the ants’ life cycle. In Texas the poisoning has also decimated two species of less-harmful native fire ants that were natural competitors of the Brazilian imports, which came back stronger than ever. A besieged homeowner, thickly clothed and equipped with a bee-sting kit, can eradicate a single colony by drenching the mound in boiling water. Classic guerrillas, the imported red fire ants are easy to kill—and impossible to stop.