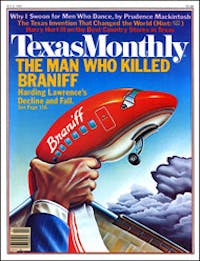 Their names speak to us about the aspirations and foibles of early Texans—Liberty Hill, Sweet Home, Vox Populi, Birthright, Hardscramble, Ideal. Some of the names are pure fancy (Frijole, Air, Oatmeal, Pegleg Crossing), and others fit the popular stereotype of the deserted Western town (Gunsight, Lost Prairie, Bitter Creek). They are all places where people settled and built houses, shot each other, bore children, made speeches, governed themselves, worked, made love, and prayed; now they are all, by one definition or another, ghost towns. Texas has eight hundred of them, according to one listing, founded mostly during the frontier era and since vanished, leaving not much more than foundations or a churchyard cemetery, if that.

Towns decline and die for many reasons. The land is overgrazed or overcultivated. The civic boosters from the next town are more glib when the highway is being planned or when the railroad men are buying a right-of-way. Drought comes, as it does in Texas. Mineral riches become scarce or, worse yet, too plentiful. All around Texans as they grow up is the evidence that a town is a fragile and organic thing. Unlike the Easterner, for whom the span of time since settlement and urbanization is measured in centuries (who remembers the ghost towns of New Jersey?), the modern-day Texan may have had a grandfather who helped build the first storefronts in his town, and just down the highway are the poignant remains of another town that fell on bad times or, possibly, simply didn’t try hard enough. I would guess that somewhere in the back of the minds of the West Texas small-town booster and the homegrown Houston office tower developer, there is a ghostly memory: the brief, sketchy history of an all-but-forgotten place somewhere in Texas, a place like Belle Plain.

Belle Plain was established to the east of Abilene in 1876. So expansive were the hopes of the founding townspeople that Belle Plain College, an imposing three-story stone structure boasting a music department with fifteen grand pianos, was built alongside a luxuriously broad, stone-lined boulevard. In 1877 Belle Plain won one disputed and one undisputed county seat election over neighboring Callahan City. “Disputed” is putting it mildly. There was a series of nighttime raids between the two towns. Sentries were posted, gunfire was exchanged, and Callahan County documents changed hands several times between October 13 and December 8, the date of the second and apparently more carefully tabulated election. Why the fuss? Because it was a matter of community survival. Having lost the county seat, Callahan City declined rapidly and is today but a graveyard about three miles north of Admiral.

But when the Texas & Pacific Railroad came to Callahan County, it was to a point six miles north of Belle Plain. A second rival, the town of Baird, was born. The county seat went to the more prosperous Baird in 1883, less than six years after Belle Plain had seemed the logical crossroads of county power and administration. When the drought of 1886 hit, it took a greater toll on Belle Plain, with its agricultural economy, than on Baird, the railroad town. By 1893 the big town hall that had held prayer meetings, dances, and Christmas pageants, the shops and saloons, the homes, and the pride of Belle Plain, the beautiful college, were largely deserted. Belle Plain had been planned and built, had thrived as a home for several hundred people, had declined and ceased to exist as something an outsider might recognize as a town, all in something less than seventeen years.

Belle Plain, and many places like it, was born out of the romantic, idealistic notion that people on the frontier can, through hard struggle and grit, counteract the brutality of the land, the entropy of the physical world, and the competition from the next town up the road. The real presence of ghost towns in the Texas psyche is not the eerie mental image conjured up by their mention: windblown dilapidation, parched and barren land, dusty tumbleweeds. They don’t even look like that. The local ghost town serves as a reminder that permanence is illusory and that complacency, on a land so recently a frontier, is for fools.