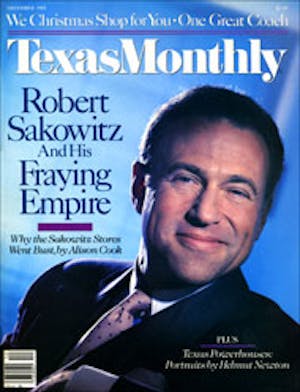 A Christmas gift, a thoughtful gift, is that special something that somebody wants or needs or dreams about. As the whole world knows, what Texans give each other at Christmastime is white mink chaps, backyard ski slopes, His and Her submarines, and baby buffalo.

The whole world knows that, because every year everybody opens his Neiman-Marcus Christmas catalog to find out what extravagant gifts those fabulously wealthy Texans are bestowing upon their loved ones this season. Those who are not privileged to receive the Neiman-Marcus Christmas catalog read all about it in the newspaper, for invariably the His and Her Gift, traditionally the most imaginative of the catalog items, is reported with glee, confirming what everyone already knows about Texans: they are a bold, generous, and fun-loving people, with so much money that they have to come up with all these outrageous and unashamedly tasteless ways to spend it.

I know that I was stunned at a tender age by reading about the His and Her Gifts. It wasn’t just the things themselves but the realization that I was supposed to be able to have them. The two-passenger submarine, billed as “the ultimate in togetherness” in the 1963 catalog, was fourteen feet long and cost $18,700. It struck me as romantic. But I was also impressed with the backyard ski slope. Only a minor feature in the 1966 issue, the ski slope was 121 feet long and 25 feet high, and it came equipped with lights for night skiing. It sold for $100,000 and was really the perfect thing for Texas, since there weren’t many places to ski here. I thought, “Well, I’m a Texan. Is my daddy going to buy me a backyard ski slope?” There wasn’t the slightest chance of it. Among other problems, our back yard was too small. It caused quite a strain, this difference between the world as I knew it and the fantastic world as presented in the catalog.

But was it real? Do rich, happy Texans sit around the Christmas tree in His and Her ermine bathrobes and exchange gifts of airplanes, camels, mouse ranches, and sterling silver choo-choo trains that roll around the dining table laden with gravy and mints? Do they telephone and simply charge up pink-and-white-striped hot-air balloons, dinosaur safaris, and ten-pound, $35,000, 24 karat-gold wigs?

Neiman-Marcus is appropriately tight-lipped about the purchases of its clientele, as well as a bit hazy on the fate of some of its exotic items. But it is common knowledge that Irma the camel, from a pair designated as the ideal His and Her Gift for 1967 at $4125 each, resides comfortably at her estate in Fort Worth, The $27,000 Beechcraft Bonanza was purchased by a West Texas rancher for the “little woman” in 1960, the first year Neiman’s featured the publicity-gathering His and Her Gift, and there are still a few Chinese junks, a 1962 His and Her offering, plying the coast. A woman in Madrid purchased one of the ermine bathrobes, and a Hollywood TV star bought the gold wig, evidence that Texan extravagance is much imitated.

Of course there have been gifts that no one, not even a Texan, would buy. The 1978 His and Her natural safety-deposit box, a 150-foot-long hole in a granite mountain in Utah, was a bomb, as were the $50,000 dirigibles in 1979. Likewise, the His and Her windmills in 1977 did not go like hotcakes, but they did reflect the times, which by then had become increasingly energy conscious. In 1970, in the midst of a recession, the store offered pessimists a modern Noah’s ark, complete with ballroom, swimming pool, microfilm library, and sauna, for $588, 247. The next year produced the ultimate in transportation security: an $845,300 tank for the freeway.

But if the Neiman-Marcus Christmas catalog defines us in any way, we might read it and think that Texans have grown more restrained and sophisticated and less flamboyant in their extravagance. The 1997 catalog is filled with crystal sculpture, a battery operated Toyota riding truck for kids, a year supply of Manolo Blahnik shoes, and—to remind us that we are not afraid of being thought crude—a $2,075 hand-painted porcelain melon and a Louis Vuitton steamer trunk that has been converted into a humidor. The His and Her gift is a Windjet, a six-person boat that holds two personal watercrafts, and costs $32,600. None of those compares with the brilliantly ridiculous backyard ski slopes, camels submarines and wigs of gold. The innocence is gone.